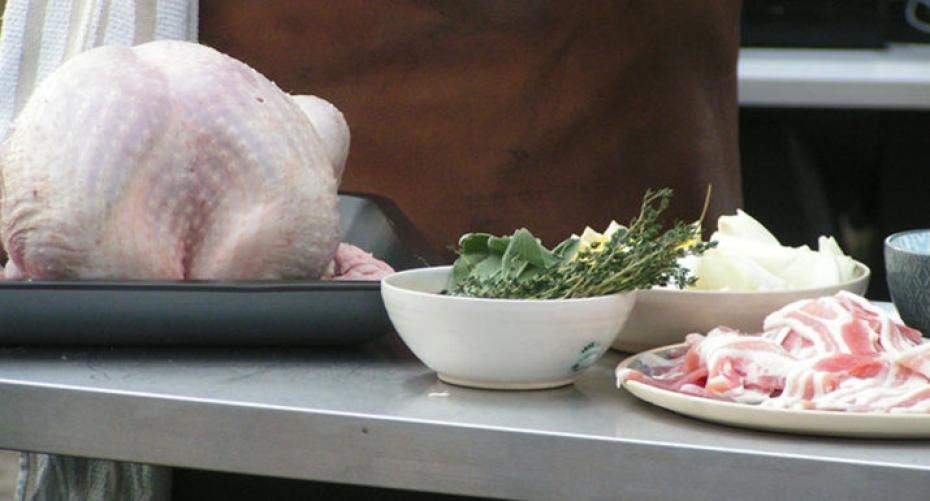 Cook a delicious, moist Christmas turkey outside on the barbecue

Freeing up your kitchen oven at Christmas and cooking the turkey outdoors on your BBQ is a no brainer. If you have a BBQ with a built in thermometer, such as a Weber where you can use the iGrill or a Traeger, it is incredibly easy to cook a large piece of meat or a bird. Just put on the bird, go inside and the iGrill or Traeger app will alert your smartphone when the turkey is 5C off the desired temperature. Just move the grill to outside the back door where it will be easily accessible. Even if you don’t have an integrated thermometer it is quite easy to check the temperature with a digital read instant thermometer.

Roughly chop the lemons and onions and place into the turkey cavity along with a couple of sprigs or thyme and sage.

Pre-heat the Traeger to 190C; make sure the turkey is room temperature before cooking as it cooks quicker and more evenly than if it is cooked straight from the fridge. Place onto the Traeger and insert the 2 probes into the thickest part of the bird; make sure they don’t go through into the cavity or are up against the bone, as they will give false readings. As the Traeger hopper holds a large amount of pellets it is a fantastic piece of kit for low and slow cooking; you should be able to get through the cook without having to replenish the fuel source. Cook for about 20 minutes per pound of bird.

Once the internal temperature reaches 60C remove the bacon and enjoy the most fantastic bacon sarnie! Replace the turkey and cook until the internal temperature reaches 74 – 75C then take it off and let rest for 30 minutes. Cover in a couple of sheets of tinfoil and some tea-towels to retain the heat; letting it rest allows the fibres to relax making the bird tenderer. Don’t leave the turkey on the grill after it has reached 75C ‘just to make sure’ as from that point on it will start to dry out.