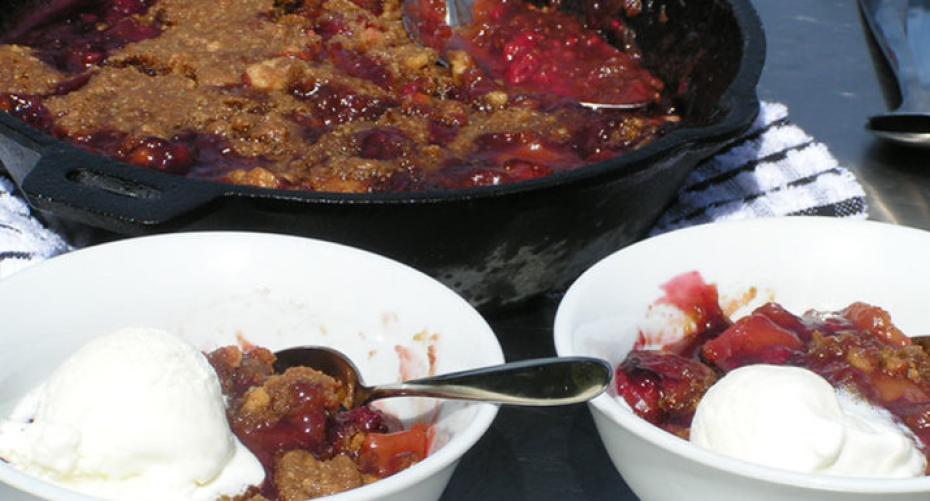 Delicious fruity desserts are really easy to bake on the BBQ

Why not finish your barbecue with a delicious dessert cooked on the grill; this peach and raspberry crisp is delicious both as a summer or winter pudding. Although the result in the video was not as expected because the weather was scorching and there was nowhere cool to make the crumble. As soon as the butter was taken out of the fridge it immediately turned to oil, nevertheless it still tasted delicious. Serve with a good quality vanilla ice-cream in summer and custard in winter. Where Richard and Ian were stood filming the temperature hit 35C (95F).

Grease the skillet with a little butter.

Combine biscuits, brown sugar, butter, salt and the remaining flour in a processor until broken down into small pieces, resembling a crumble mixture. Spoon over the fruit mixture. Unfortunately the melted butter turned the mixture into a paste mix instead of the crumble, so Richard had to put spoons full onto the fruit instead of spreading it in an even layer, but once cooked it still tasted delicious.

Pre-heat the Traeger to 177C (350F) and cook for about 45 minutes until the topping has gone golden brown and the fruit is bubbling.

Serve with vanilla ice-cream, we used English Lakes Double Jersey, in summer or vanilla custard in winter. Any seasonal fruit can be substituted for the peaches and raspberries; if you have a glut of fruit just bake it on the BBQ. Add some apples to blackcurrants, mango to strawberries, ginger to rhubarb or use just plain gooseberries.