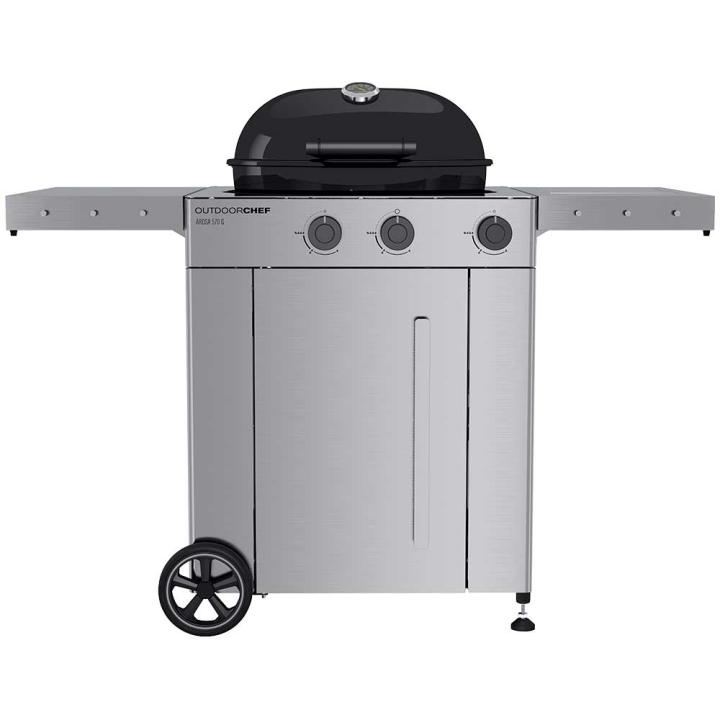 OUTDOORCHEF is revolutionising the gas kettle barbecue with the AROSA 570 G.

In addition to a modern minimalist design, OUTDOORCHEF is also unveiling for the first time its specially developed Gourmet Burner Technology (GBT) and the new Gas Safety System (GSS) for the Arosa 570 G Premium Steel.

The Gourmet Burner Technology makes it possible to use a consistent and continuous temperature range of 80-360 degrees in the standard position, a feature not available on any other barbecue on the market. Together with the new burner system made entirely from stainless steel, it opens up a whole range of options for diverse barbecue creations. It is now possible to easily slow roast meat and fish at just 80 degrees – for even more succulent results!

This barbecue is ideal for trendy low & slow dishes such as beef brisket, pulled pork and spare ribs and prepares them perfectly at temperatures between 100 and 130 degrees. Grilling, cooking and baking up to 360 degrees is also no problem. Rotating the funnel to the volcano position allows you to work with concentrated direct heat of up to 500 degrees – ideal for OUTDOORCHEF accessories such as the griddle plate or barbecue wok.

As well as cutting-edge technology, safety is another essential consideration – and the innovative Gas Safety System (GSS) makes barbecuing with gas even safer. Developed by OUTDOORCHEF, the Flame Guard ideally protects the ignited burners from weather influences, allowing you to easily barbecue at low temperatures from 80 degrees, even on windy days. If the burner is extinguished by a gust of wind, the Flame Guard ensures that the burner system reignites automatically each time. This prevents escaping gas that could accumulate and accidentally ignite later. The Safety Light integrated in the control dial stands for tried-and-tested OUTDOORCHEF safety: The user can see at a glance whether the valve is open or closed.

The cleverly designed base frame can also be used to store the gas bottle, an additional barbecue grid and a pizza stone (not included).
Two folding side tables also provide enough space for preparation. The locking function for the right-hand side table also makes it easy to manoeuvre the barbecue. The Arosa 570 G Premium Steel also features an additional side cooking plate.

See OutdoorChef website for guidelines on care and maintenance.

View all Barbecues (BBQs)
View all products from this brand

Weber Genesis EPX-335
Introducing the newly designed Genesis® barbecue that allows you to prep, sear, and serve everything outside, where the party is.
1999.00
Price
£1,799.10

Kettler Neo Outdoor Kitchen
The leading Neo Outdoor Kitchen is perfect for entertaining family and friends in the comfort of your own outdoor space. Featuring a minimalist design, this detailed kitchen can be kept outdoors all year round.
7499.00
Price
£6,699.00

Grillstream Classic 6 Burner Hybrid With Side Burner - Grey
Our Classic 6 Burner comes packed with our patented technology. Like all of our BBQs its got our unique Grillstream system for healthier, tastier food with no flare ups.
799.00
Price
£599.00

Norfolk Grills N-Grill 3 Gas Burner BBQ
The N-Grill is a multi functional grill with portable features will not only allow you to BBQ from your garden but also take on camping trips.
Price
£649.00
Trustpilot