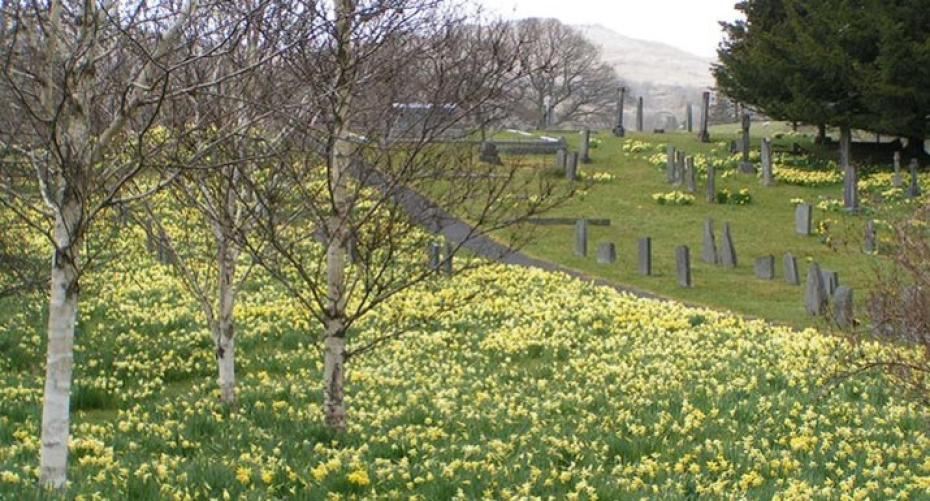 ….of Narcissus lobularis (pseudonarcissus), the Wordsworth Daffodil, Lent Lily or wild daffodil. It is a small dainty daffodil, growing to a height of 10cm (4”), with creamy, white petals and a yellow trumpet. It is an excellent daffodil for naturalising in an open woodland situation or in a meadow. Why not plant your own little patch of the Lake District to bloom in spring. Once planted they can be almost forgotten, requiring very little in the way of aftercare.

They need a moisture retentive but well draining soil in a sunny position; but they will tolerate a little shade. A poor, dry soil will need to be improved by adding a good quality, peat-free compost or garden compost. If the soil is heavy then incorporate some coarse grit to improve the drainage.

If you are visiting the Lakes to see the daffodils they are usually in bloom from the middle to the end of April. Recommended places to visit to see the daffodils: Rydal Church; Troutbeck Church (near Windermere) and Wordsworth Point, Glencoyne Bay, Ullswater.

The National Trust alleges that these original daffodils along the shores of Ullswater are under threat owing to well-meaning visitors planting non-native, large flowered cultivated varieties. These large varieties are out-competing and hybridising with the native species and so contributing to their decline; a view which is disputed by the Wordsworth Trust. Whatever the truth of this situation they are still worth a visit, just please don't plant, or remove, any daffodils.

These dainty little daffodils inspired the poem by William Wordsworth written in 1804, and published in 1807. He wrote the poem after a walk around the shores of Ullswater with his sister Dorothy, being inspired by the swathes of daffodils on the shore of Glencoyne Bay.

“I Wandered Lonely as a Cloud”

I wandered lonely as a Cloud
That floats on high o'er Vales and Hills,
When all at once I saw a crowd
A host of dancing Daffodils;
Along the Lake, beneath the trees,
Ten thousand dancing in the breeze.

The waves besides them danced, but they
Outdid the sparkling waves in glee:-
A poet could not but be gay
In such a laughing company:
I gaz'd – and gaz'd – but little thought
What wealth the shew to me had brought.

For oft when on my couch I lie
In vacant or in pensive mood,
They flash upon that inward eye
Which is the bliss of solitude,
And then my heart with pleasure fills,
And dances with the daffodils.