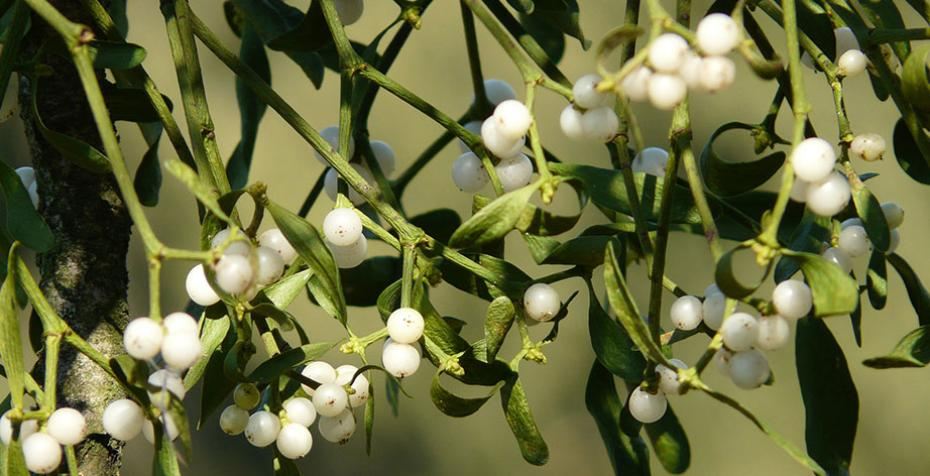 Why do we have mistletoe at Christmas?

Mistletoe is the epitome of Christmas and romance and has played a significant role in English celebrations for centuries, beginning with the ancient Druids who believed it brought good luck and warded off evil spirits. It was significant to a number of ancient cultures; the Romans thought it symbolised peace, love and understanding, the Greeks used it as a medication for relieving pain and ulcers but it was the Norse who were the origin of kissing under the mistletoe, which was taken up in the 1700’s in the UK, symbolising romance and fertility.

Tradition has it that any man was allowed to kiss a lady if she was standing under the mistletoe and refusal on her part would result in bad luck for the unwilling maiden. Some towns still celebrate the mistletoe with Tenbury Wells crowning a ‘Mistletoe Queen’ as part of their annual celebrations. The majority of mistletoe in the UK is grown in the Midlands and East Wales; with it being the county flower of Herefordshire.

Mistletoe is a semi-parasitic plant, extracting water and minerals from the branches of its host which in the UK is usually a cultivated apple tree; but it can also be found on lime, poplar and hawthorn. It always grows on the branches, never on the ground. It can, rarely, cause the death of its host if there is a particularly heavy infestation, starting with the die back of the infected branch.

Worldwide there are about 1,500 species of this evergreen perennial; with Viscum album being the native British species. Although it can be toxic to humans and pets, containing the poisonous protein phoratoxin, it is a valuable winter feed for the birds, who spread the seed either in their faeces or by wiping the sticky seed off their beak onto a branch. Symptoms of mistletoe poisoning include vomiting, blurred vision, drowsiness, diarrhoea and seizures.

You can seed your own trees but it does take quite a while to become established, it can take a year just for the tap root to penetrate the bark of the host. For the best chance of success, if possible, gather seeds from the mistletoe on the tree and sow onto a tree of the same species. Select a mature tree as the host as it is better able to withstand the extraction of its water and nutrients, whereas a young tree needs them all in order for it to develop.

Once you have collected the berries squash them and place them just under the bark in a sunny position. Sow quite a few as the germination rate is poor. Once it has become established prune to keep it to a manageable size and stop it overwhelming the tree.