Where did Father Christmas come from?

Santa has worldwide recognition today; but it was not always so

Everyone knows where Santa lives today, the North Pole of course, but it took several hundred years and numerous incarnations to arrive at the jolly plump generous benefactor we know today. The very first sign of a generous, kind man who gave secret gifts to the poor was St Nicholas who was a bishop in Myra, Asia Minor, which is modern day Turkey. He wore red robes which is possibly where his modern day tunic comes from. Legend has it that he dropped some gold coins down the chimney to pay for a poor girl’s dowry and it landed in a stocking drying by the fire. He repeated this with the other two sisters but at the final act of generosity he was caught by her father and so any unexplained gift was thereafter attributed to St Nicholas. This bag of gold is possibly represented by todays’ tangerine or orange; which up until about 50 years ago were a special luxury foodstuff reserved for very special occasions.

He was made a saint for his kindness and generosity; not only is he patron saint of children but also sailors. Sailors in the Italian port of Bari, where his bones are interred in his namesake church, still take his statue out to sea on his feast day to bless the waters and pray for safe voyages. He was exiled and imprisoned, his actual death is unknown but it was on December 6th in either 345 or 352.

Early pagans held several festivals over the winter period where they drank to excess and gave presents. One of these was the Saturnalia celebration on 17th December, honouring the god of agriculture, where small pottery figurines, festive candles, fruit and nuts were given. Early Christians disapproved of these festivals but realised their importance to the populace and replaced the Saturnalia festival with one commemorating the birth of Jesus. The actual birth date of Jesus is unknown but was recorded in Rome in 336 as coinciding with the winter solstice on 25th December.

In the 16th century popularity waned but someone had to deliver presents so, in England particularly, he became Father Christmas or Old Man Christmas. In France he became Pere Noel and the Christkind in Austria and Germany. Kris Kringle was the name given in the USA but early Dutch settlers brought St Nicholas and combined with Kris Kringle it became Sinterklaas and then Santa Claus. Early European celebrations centred around the 6th December, the birthday of St Nicholas.

Christmas celebrations waxed and waned over the following centuries with the Puritans, in the mid-1640s, banning the celebration altogether for 15 years as they saw it as just an excuse for drunkenness and lewd behaviour. The celebration revived during the Restoration period in 1660 and the date was changed from December 6th to the 25th, but then popularity waned once again. Father Christmas was first recorded in England around this time but the festival was noted for the drunkenness and merrymaking rather than the giving of gifts. Some European countries still carry out the practice of giving Christmas gifts on St Nicholas Eve.

In the late 18th century he became a character in plays, being portrayed in several guises wearing a variety of costumes, holly on his head, various masks and comic wigs and brandishing a club. The first account of him wearing red comes in 1842, but he continued to wear other colours such as green, blue and brown fur, but red was the most popular. So it is definitely a myth that the red stems from Coca Cola advertising.

A New York publication of 1821 was the first to give him a sleigh pulled by reindeer but an 1823 poem ‘ A visit from St Nicholas’ or ‘Twas the night before Christmas’ by Dr Clement Clarke Moore gives him eight reindeer with names for each. The reindeer are probably female as the males shed their antlers before Christmas in order to conserve their strength to grow even larger ones in the spring. The Victorian era saw the revival of St Nicholas and the start of the present giving tradition in earnest, previously it had just been games and feasting. 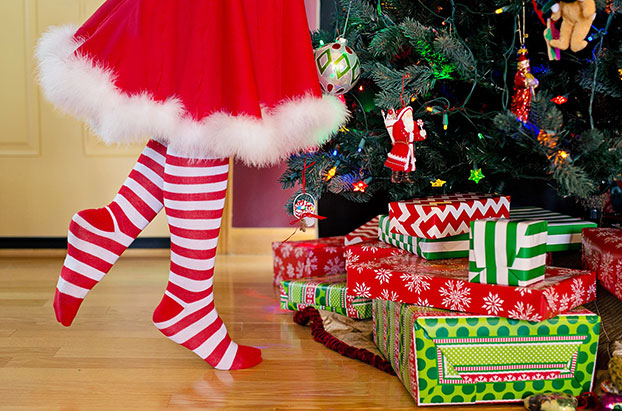 The present incarnation of Santa appeared in an illustration by Thomas Nash in Harper’s Weekly in 1881; this portrayed him as having a red suit, large belly, toys and a pipe. This was further endorsed to the wider public by a 1920’s Coca Cola advert. Department stores began to spring up in the late 19th century and they saw an economic advantage to promoting Christmas, with the first Christmas Grotto in the UK opening in 1888 in JR Roberts store in Stratford, London. By the early 20th century the US Santa Claus and the UKs Father Christmas began to be amalgamated.

In the present day the importance of Christmas is not only spiritual but also a vitally important part of the retail economy. Although Christmas is mainly a Christian spiritual celebration many non-Christians now celebrate it on a cultural level. Although there are various interpretations of Father Christmas almost everyone agrees that he does indeed fly and leave presents, either entering the building via the chimney or using a magic key.