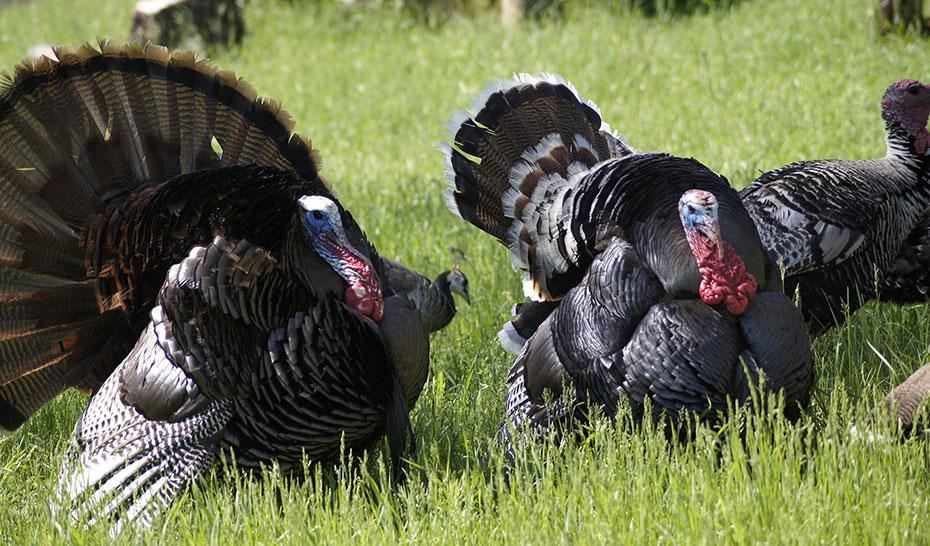 When did we get the Christmas turkey?

Who doesn't look forward to the Christmas roast turkey?

As soon as you mention Christmas the first thing that usually comes to mind is turkey, unless you’re about five and then its presents. In the UK it is traditionally eaten at Christmas accompanied by roast potatoes, stuffing, gravy, bread sauce, cranberry sauce, pigs in blankets, parsnips and Brussels sprouts. Thanksgiving in the US is the worst time for turkeys as around 60 million are eaten, compared to 10 million in the UK at Christmas. There is more to turkey than just roast, it is a really versatile bird giving low fat burgers, mince, dice, steaks and goujons to name just a few.

The turkey (Meleagris gallopavo), originates from Mexico but was widespread through the Americas before being brought to Europe. It is one of the most long-lived species, having been around for about 10 million years. It is related to the dinosaurs Tyrannosaurus rex and Velociraptor. Wild turkeys can fly for short distances of up to 55mph but domesticated breeds have been specifically bred to be very meaty which has rendered them too heavy for flight. The heaviest wild turkey weighed in at 17kg (37lb) whereas the domestic breeds are usually killed at an average weight of around 5.5kg (12lb).

A certain William Strickland is credited with bringing the turkey to England in 1526 after a voyage of discovery to the Americas; although there is no evidence of this. He is alleged to have traded with the Native Americans and brought home 6 birds which he sold in Bristol market for tuppence each. He did however continue to trade in turkeys and become rich enough to build a stately home at Boynton near Bridlington, East Yorkshire and become a Member of Parliament under Queen Elizabeth I. He adopted the turkey as his coat of arms in 1550 and the local church where he is buried is adorned with turkey images. There is evidence that turkeys were traded from Eastern Europe, in particular Constantinople, present day Istanbul, which is how they came by their name.

We’ve been eating turkey at Christmas for almost 500 years with King Henry VIII, in the 16th century, the first monarch to have turkey. Previously the nobility dined on swan or peacock. In Medieval England the Christmas feast, if you could afford one, was usually boar. In the 16th and 17th centuries it became goose or capon for the lower classes. By 1573 turkeys had become commonplace but goose was still prevalent, and continued to be so until Victorian times.

By 1720 around a quarter of a million turkeys were walked from Norfolk, the main breeding area, to the London Christmas markets. They started off in August stopping at feed stations along the way, following what is now the present day A12. They were assembled in small flocks of up to a 1,000 birds.

In 1930 it took a weeks’ wage to buy a turkey now it only takes a couple of hours work. The first meal eaten on the moon by Buzz Aldrin and Neil Armstrong was, you’ve guessed it, turkey. Worldwide there are about 43 different breeds but in the UK we tend to stick to the three most common, white, the original bronze and the Norfolk black. It’s a myth that all turkeys gobble, it is only the males.

Turkeys are not only one of the most widely eaten birds but also one of the most fascinating with annual turkey calling contests being held throughout the American Midwest.

Click here to see how to cook the Christmas turkey on the Weber MasterTouch charcoal barbecue.

How to look after houseplants in winter
Hints and tips for keeping your houseplants happy Most of us know that our garden plants need some…
Sleep with your Christmas tree
How having a Christmas tree in the bedroom can lead to a better night's sleep After what’s been a…
December
Well, November is seeing itself out with windy weather & blustery showers spreading across the…