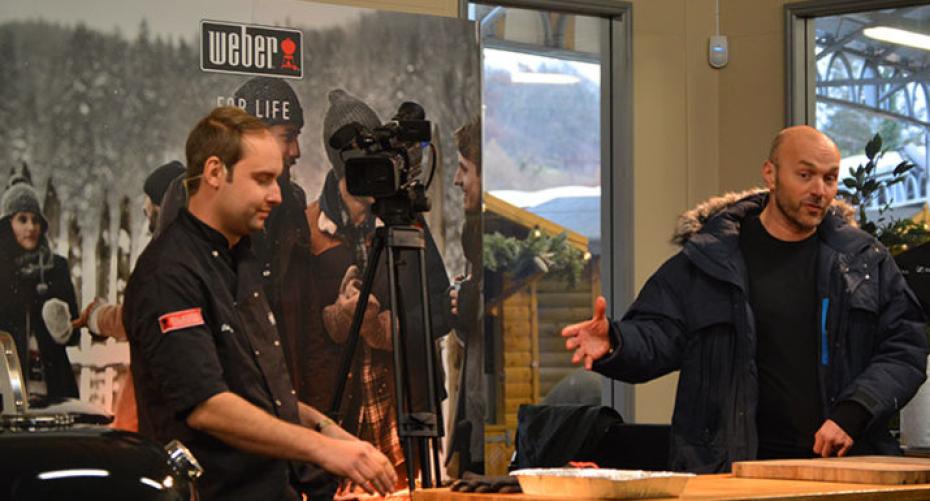 The Weber team were in store on Saturday 3rd and Sunday 4th December to host their Christmas Market road-show. They had teams of chefs preparing tasty Christmas themed nibbles for the crowd; who would have thought sprouts could be so delicious. We were treat to roast duck, turkey and beef rib, pigs in blankets, mini baked potatoes with cream cheese and chocolate brownies. The meat cooked outside on the barbecue is so much more moist than cooking in your oven indoors as the barbecue draws in the moisture from the air outside.

The star of Sunday Brunch, Simon Rimmer, is the new face of Weber and opened the Market on Saturday lunchtime speaking about his passion for food and the need for people to connect to the food they eat. He spoke about his involvement with Alderhay Children’s Hospital, Liverpool and its pioneering attitude to feeding the sick children. The parents can access the kitchen 24/7 to try and coax the children to eat by giving them what they want, when they want. There is also a small outdoor area where they can get some fresh air, grow some herbs and vegetables and hopefully get involved with cooking on the barbecue.

Dan, from Weber, spoke of the simplicity of cooking a large bird, Christmas turkey or joint of meat outside on the barbecue in winter. One of the concerns customers raise is the fact that they think that you have to stand outside and watch the meat cook, and as Dan pointed out you don’t do that in the kitchen so why would you watch the meat on the barbecue! The barbecue is ideal for cooking the turkey at Christmas as it frees up the kitchen oven for all the other bits and pieces that go to make up a delicious Christmas dinner.

Also on display for the weekend was the newest offering from Weber, the Genesis 11, which will become available in January 2017. At a price of just less than £1,300 for a huge barbecue it is absolutely ideal for anyone wanting to cook a large amount of food.