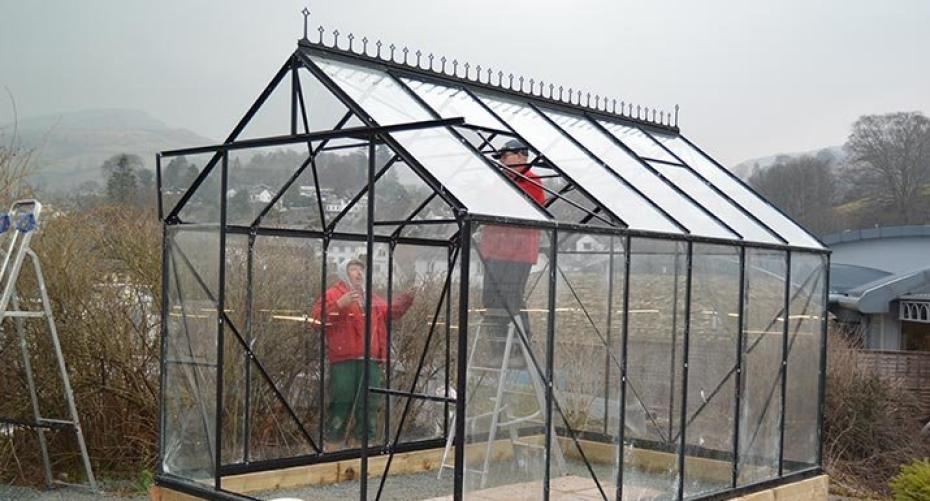 Here at Hayes we’re undertaking a slightly daunting venture, ‘How to ……’ video blogs. At the moment we are constructing our own filming garden; hopefully well away from helpful advice, of the ‘ooh I wouldn’t have done it like that’ sort!  I’m sure in the first blogs we will be doing our ‘rabbits caught in the headlights’ impressions! The information will be accurate but I’m not too sure about the delivery. We’ve had our practice in front of the camera; every coherent thought in my head flew out of the window and I could barely remember my name let alone what I was doing there, so more practice needed I think.

We will be having an undercover work area, greenhouse and raised beds. Hopefully presenter’s perks will be the vegetables and flowers at the end of the season. The paths have been gravelled and the greenhouse is going up today. Looking forward to planting it up with tomatoes, cucumbers, peppers, aubergines and melons. We will be covering a range of topics from gardening to furniture to barbecues.

We will be keeping you updated with the progress of the project and hopefully will be shortly announcing our first video.

Filmed the first batch of 'How to ...' videos on wednesday 25th March; lets just say they got better as the day went on!! It seemed as thought there was more RAF activity that day than there had been for the whole of winter. The videos should be with you pretty soon; most of this first batch are on seed sowing, with one on growing First Early Potatoes in bags and containers, planting a herb container and planting non-stop Begonias in a window trough for a simple splash of colour this summer.

Our makeshift video blog studio  -  on top of a windy hill!

All the seed from our first session are in the greenhouse where it's nice and warm, salad leaves have already germinated, hopefully some of the others won't be far behind.

The next session will, weather permitting, be on sowing seed in the raised beds.

We're now 6 months on from those first videos and we've eaten the first early potatoes, spring onions and radish. The rabbit has eaten all the beetroot, lettuce, carrot tops, spring onion tops (the spring onions were salvagable!) and is now starting on the main crop of onions - it must be the size of the 'Were Rabbit' by now! We've had lots of peas, spinach, chives and cucumbers but the cauliflowers still haven't hearted up - but there's still time.

Cucumbers, tomatoes and basil growing in the greenhouse.

Vegetable bed showing the cauliflowers and potatoes with the peas, greenhouse and the summer bedding plant container in the background.

Cauliflowers are a complete failure; they either haven't hearted up or else have bolted. apparently there are several causes for this: they don't like it too hot and dry and we had some short really hot spells and they don't like their growth checked, I think we left them in the pots too long before we planted them in the beds. They would have been better if we had sowed the seed a bit later in the season so they would be starting to heart up in early autumn when it is a bit cooler.

The grafted tomatoes outside in the growbag haven't done very well; at first I thought that they had blight but they haven't collapsed, just got brown patchy leaves. I think that this is a tomato virus; as a result the yield is very poor.

If you want us to cover any particular topic in the videos please fill in a comments box at the bottom of this article.