Vegetarian BBQ: Swap your BBQ for a VVQ this summer 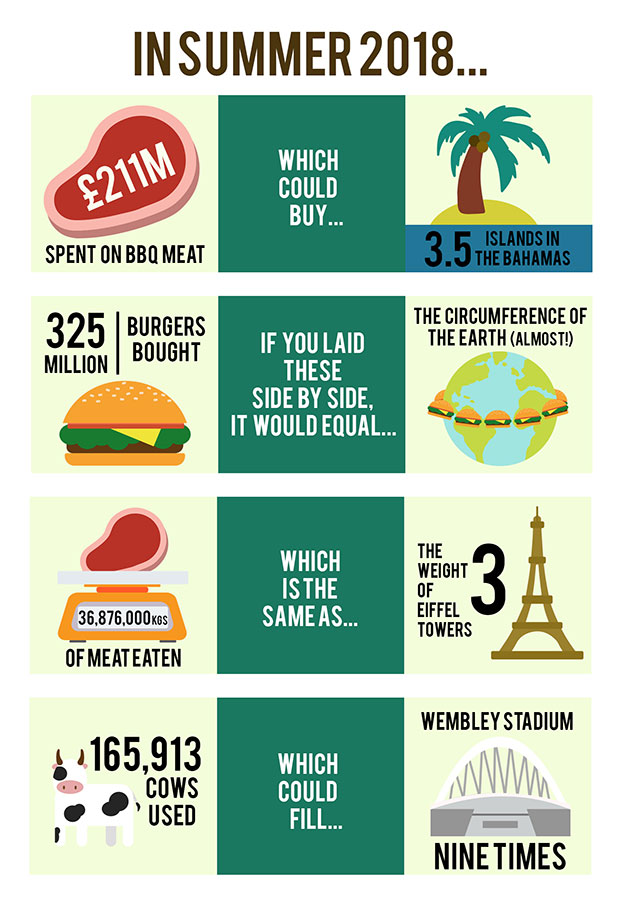 We’ve all heard the discussions around the importance of cutting down on meat, for both a healthier lifestyle and the environment. And the BBQ is no exception.

That’s why this summer, we’ve launched our VVQ campaign, to promote Vegan (V) or Vegetarian (V) Quisine (Q) that you can eat on the BBQ.

We’ve got some great vegetarian and vegan BBQ recipes available on our website: click here, as well as a Facebook competition to encourage keen BBQers to share their best vegetarian or vegan BBQ recipes for the chance to win, click here to enter. Plus, our content team has found some interesting stats around meat-consumption in the UK and what this means for the environment - read below to find out more.

Whether you’re going totally meat-free or you’re just cutting down, you can still enjoy the Great British BBQ without meat.

How much meat was eaten on BBQ’s last year?

Why should I try to eat vegetarian food on the BBQ this summer?

There’s a lot of discussion around the importance of cutting down on meat. Not only is a reduced meat diet healthier, it also has a lesser impact on the environment and natural resources.

Did you know that with the resources needed to raise 1 cow you could produce 27,440 soy burgers? That could cater to A LOT of BBQs this summer. 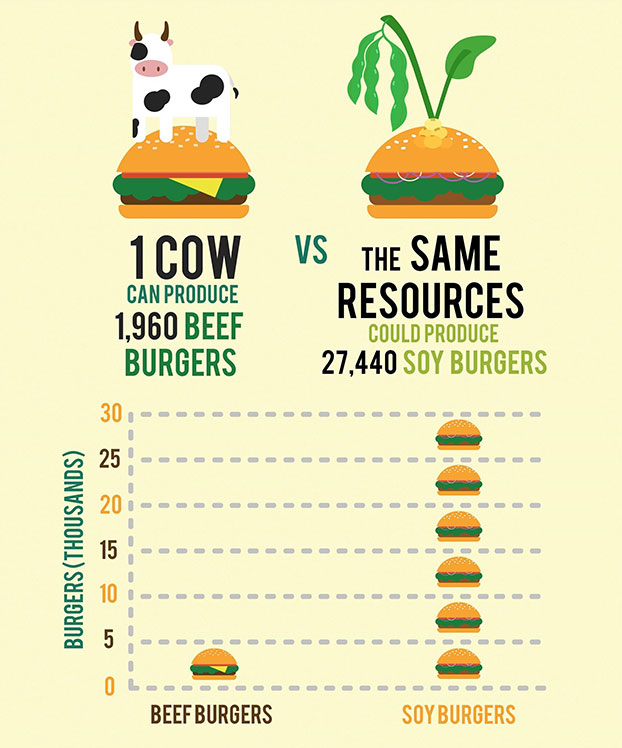 How much resource does it take to make a beef burger?

It takes 14 pounds of soy and grain to make 4 beef burgers.

With the same resource, you could grow 28 ears of corn or make 56 soy burgers.

If the resource for the 41,000 cows that were used for the BBQ meat in 2018 was used to produce soy burgers instead then last year we could have made 1,125,040,000 soy burgers. If we estimate that Brits will continue to have 168.3 million BBQs a year, then this is enough soy burgers to last over 6.5 years of summer BBQs if everyone was to go meat-free. 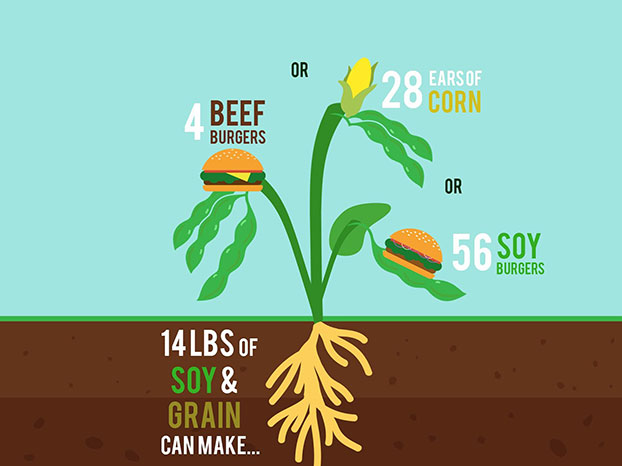 How much money is spent on BBQ meat?

In summer 2018, a whopping £211million was spent on BBQ meat and burgers. That’s enough money to buy 3 islands in the Bahamas.

When it comes to BBQs, Brits do love their beef burgers. But switching your BBQ menu to a meat-free alternative can be just as tasty - and it can be a lot better for your health.  Studies have found a correlation between eating red meat and an increased risk of developing diabetes, and research suggests that a plant-based diet can actually reduce the risk of type 2 diabetes [Source:www.health.harvard.edu]. Research has also shown that those who eat red meat are at an increased risk of death from heart disease, strokes or diabetes, and even cutting down meat intake can prevent these illnesses [Source:https:/www.mayoclinic.org]. Did you know, there’s also more protein in a soy burger than a beef burger? So, there’s plenty of reasons to try something new on the barbie this summer. 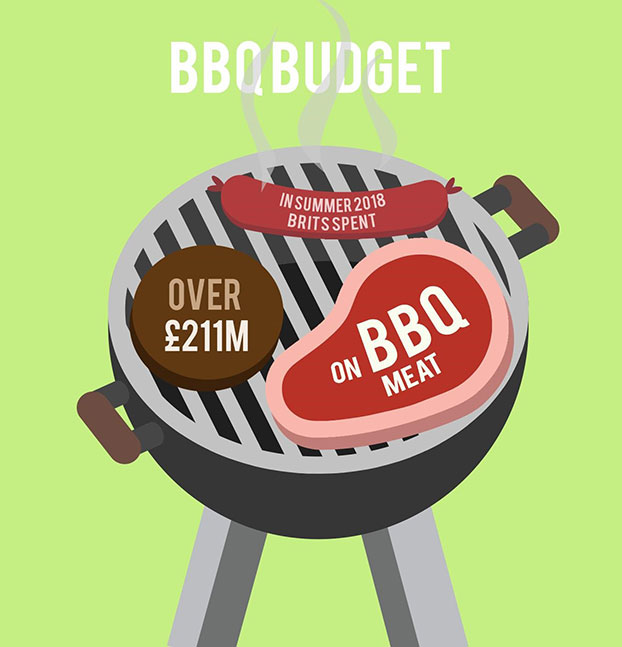 How many non-meat eaters will be at my BBQ this summer?

1 in 3 BBQ guests will opt out of eating meat this summer.

That means if you have 10 friends round for a BBQ, at least 3 of your guests are likely to not want to eat meat.

So, if you’re still not convinced that you should try to eat something meat-free on the barbecue, then consider your guests who may be going meat-free.

Before you panic about recipe options - relax. Just because you or your guests don’t want to eat meat, it doesn’t mean you can’t enjoy the BBQ experience.

Our Knowledge Hub has a great selection of vegetarian and vegan BBQ recipes for you to explore, from spicy baked eggs in tomato sauce to an oriental vegetable stir-fry. We’ve also got a selection of recipes from celebrity chefs as well as from our loyal customers, so there's a recipe to suit all tastes and budgets. Check out our vegetarian and vegan BBQ recipes here.

This summer we're giving you the chance to WIN with our VVQ competition. Simply share your favourite vegetarian or vegan BBQ recipe here and validate your entry on our Facebook page for the chance to win barbecues and accessories. 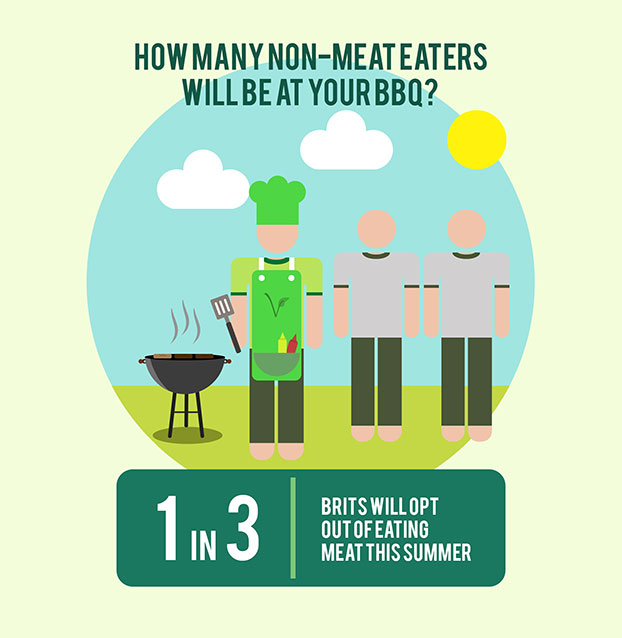 3. 325 million burgers were bought, which laid side by side equals (almost) the circumference of the earth. 81297663.80 pounds of meat were sold last summer [see figure 1]. An average cow produces 490 pounds of boneless trimmed beef and 1 pound of beef can produce 4 standard quarter pounder burgers. Therefore, an average cow can produce 1960 burgers. As one pound equates to 4 burgers, we can calculate that 325190655.212 burgers (325 million) burgers were sold last summer. The standard size of a quarter-pound burger is 4.5 inches, judging from standard quarter pounder burger cutters [Source:lakeland.co.uk/Quarter-Pounder-Burger-Press] which is equivalent to 11.43cm. 11.43 multiplied by 325 million is 37,147,500 meters, or 37,147.5 KM. The circumference of the earth is 40,075KM [Source: space.com].

8. 1 in 3 BBQ guests will opt out of eating meat this summer. The Waitrose food and drink report 2018-19 [Source:Waitrose.com] discovered that 12.5% of Brits are now vegetarian or vegan and 21% are flexitarian (largely plant-based diet, but will eat meat on occasion). Therefore, one third (33.5%) of consumers are deliberately cutting out meat on most occasions, saying no to meat on the BBQ.