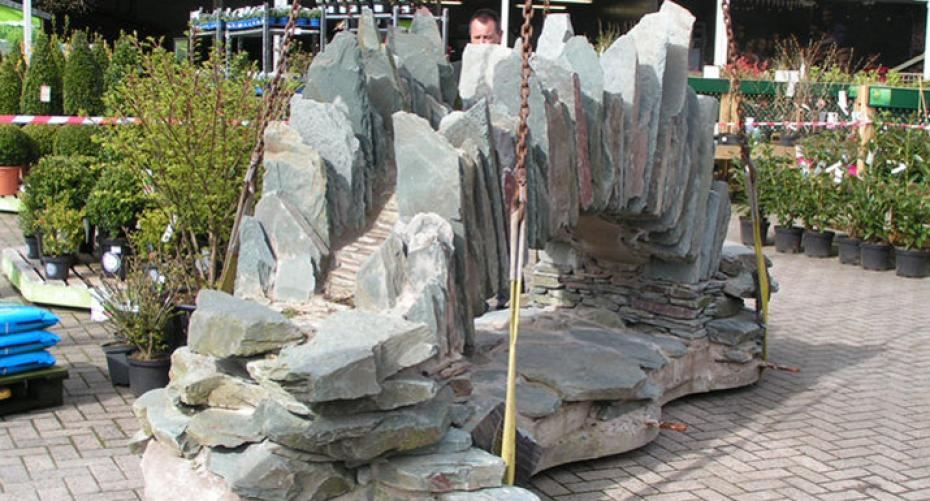 A miniature copy of the famous Lake District Slater’s Bridge has arrived at Hayes Garden World to join the copy of the Bridge House, Ambleside. It is situated just outside our plant information centre in the middle of the nursery.

The original Slater’s Bridge (Grid ref: NY311030) spans the Brathay River as it rushes from approximately 393m (1289’) near the top of Wrynose Pass on its way to join the River Rothay near Ambleside and eventually into Lake Windermere. They are actually two bridges, one just a flat stone slab and the other a more iconic packhorse style. It was possibly built around the 17th century to allow the quarrymen from one side of the stream to access the quarries, such as Hodge Close and Cathedral Quarries on the other side of the valley.

It is possibly one of the most photogenic bridges in the Lake District but as there is no car park nearby it receives much less tourist traffic than other well-known bridges, such as Ashness. There is a lovely 6 mile walk starting at Elterwater, which is relatively easy and takes about 3 hours. If you want something a little more challenging then start your walk at Grasmere, which is about a 12 mile trek. If you want to experience the raw beauty of the bridge without the exercise then come into the store and visit the replica, then you are only 2 minutes from our Four Seasons Terrace Café where you can relax with one of our famous scones and a cup of Farrer’s coffee.

The replica here at Hayes was made by Edward Robinson with slate from Honister Slate Mine. Edward has constructed Lakeland Miniature Village, Flookburgh which is open to the public. He started the project in 1992 with a little help from his son Michael and today he has over 100 iconic Lakeland buildings on show. The miniature landscapes feature houses, farms and barns including Townend, Troutbeck and Beatrix Potter’s Hilltop.