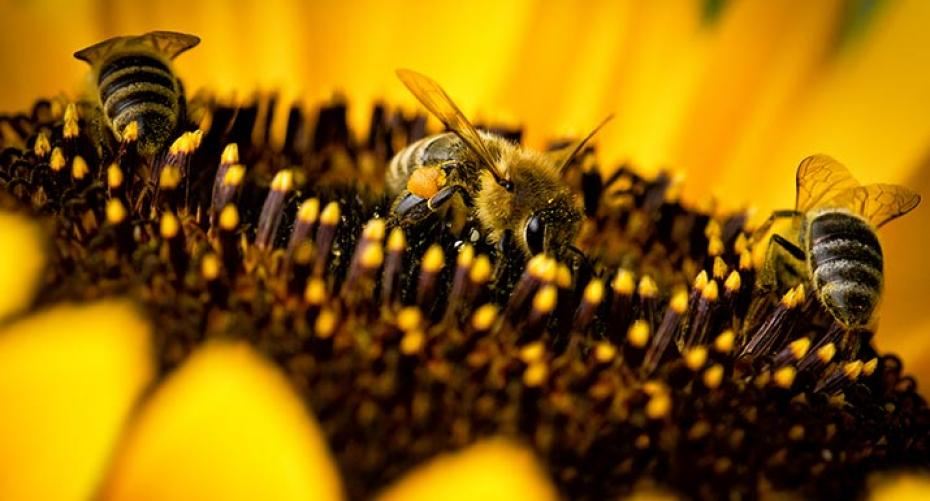 All over the world the numbers of honey bees and other pollinating insects, such as bumble bees and butterflies, are collapsing at an alarming rate. The murmur of bees in a summer meadow, once so illustrative of that season, is now hardly heard and soon the silence of extinction could replace it.

Pollinating insects evolved with flowers and plants. Honey bees are tempted by the nectar in flowers, by which they make honey; at certain times they also collect pollen, much of which is used to feed their larvae. Whilst visiting flowers they carry pollen from male to female plants, thus playing a necessary part in plant procreation. Some food crops such as cereals are wind pollinated but many rely on insects for pollination & these may disappear with their decline. In one province of China the pear crop now has to be pollinated by hand. The bees were destroyed by the indiscriminate use of fertilisers. Humans, understandably, are far less efficient at the job & far more expensive.

There are conflicting theories about what is to blame for the collapse. Amongst these are virus infection, pesticide poison, malnutrition through mono crop feeding, agricultural industrial use and years of artificial interference (sugar feeding and genetic manipulation being examples). Rudolf Steiner warned, back in 1923, that bee numbers would start collapsing in 80 or so years because of bee keeping practices at that time. The fact that he was and still is, by many, considered to be eccentric does not alter the fact that his predictions have come true.

These are insecticides that environmental organisations like Friends of the Earth and The Soil Association considers to be the most likely cause for the reduction in bee numbers & they want the products that contain them banned. On the other hand, The Horticultural Trade Association argues that the evidence is not clear on Neonicotinoids and other causes such as the Varroa mite are the more likely cause. In support of this they say that neither British scientists nor groups like the British Bee keeper Association have called for neonicotinoid products to be withdrawn. An industry report published earlier this year suggested up to £630m could be lost from the UK economy each year if neonicotinoids are withdrawn.

To be fair all sides have their own agendas and everyone, including pro and anti-ban politicians, are keeping an eye on developments. It has to be said that neonicotinoids are effective in dealing with aphids on crops & vine weevil in gardens and that makes banning a problem. Environmental groups would probably counter with talk of these insects developing resistance. In the end the real arbitrator is you the customer.

The problem with the debate at this time is that although some studies provide evidence of sub-lethal effects of neonicotinoids within certain experimental conditions, there are no proven links between the current usage of neonicotinoids & serious implications for bee colonies in the wild. The fact is that any action that deals with the likely contributors to the reduction in bee numbers needs to be taken now. Growing wild flowers to vary the bees’ diet rather than relying on a mono crop might be the first step.

Gardeners can play an important role in doing something positive about the problem by growing plants that bees like. In fact many city gardeners claim that bees are doing better there than in the open country. The number of parks, gardens, roof gardens, lack of pesticides and greater choice of plants all being put forward as possible reasons.

It is fifty years now since Rachel Carson's classic book; “Silent Spring” kick started the environmental movement. At that time, in Britain, there was a great fall in song bird numbers because of the effect of DDT on egg shells and fertilisation. Some pesticides were banned and fortunately bird numbers recovered. The book begins with a description of a dead and silent spring. Let's hope the loss of the bees doesn't cause a similar silent summer.

12 Reasons to grow a tree
Climate change is potentially catastrophic but it can be averted if enough of us plant a tree This…
How To Save Water In The Garden; 10 Top Tips
Help the environment and reduce your work by saving water in the garden Save rainwater. Install as…
Tree trivia
Trees are one of the most important organisms on earth in so many ways 2022 marks 70 years of…