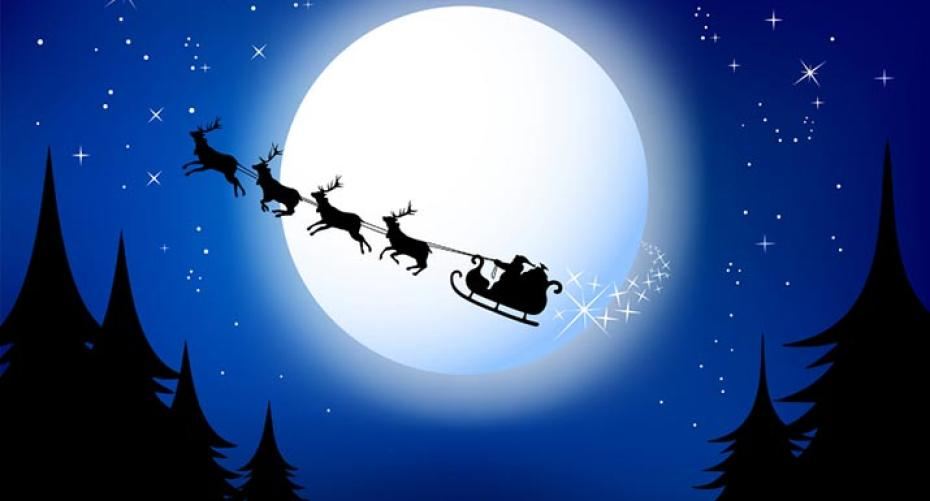 Penelope Prim had emailed Santa Claus to tell him that she wanted a new doll for Christmas. It was not to be any old doll, but one with all the latest features and umpteen changes of clothes, all   fashionable, of course. She knew, for certain, she would get what she wanted because she always had. Mummy and Daddy were very, very rich because they all lived in a huge house in the country.

Rosa Rag and, on the other hand, lived in a very small house and her parents were very, very poor. She, like Penelope had written to Santa Claus for a doll, but, unlike her, had not asked for any extras. All she desired was a doll she could love, whilst Penelope wanted one to show off to her friends. That she planned to do at the Christmas party at her house, on Christmas day.

As usual things were hectic, on Christmas Eve at Santa's Lapland Grotto. The Elves were run off their feet making sure the right toys were allocated to the right children. Two of them, Merry Belle and Crystal Flower were busy with some of the dolls.

“Come along, girls, you're all pretty enough,” prompted Crystal Flower to the dolls applying their last minute make up, “Father Christmas will be off soon!”

“Felicity, Please hurry up?” pleaded an exasperated Merry Belle at a doll called Felicity Fancy, who had changed her clothes seven times in the last ten minutes.

Felicity examined herself proudly in the mirror. Not only were all her clothes beautiful, but she would be able to talk, walk, dance and sing for the lucky girl who got her tomorrow. Still she was concerned about what to wear.

“I have to look my best, Merry Belle,” she replied to the Elf, “I am allocated to Penelope Prim. You wouldn't want me to go like that.” Felicity pointed to a tatty Rag Doll, with sad pleading eyes, who, by the look of her, had obviously had had many owners before.

“I pity the girl who gets landed with you,” she said sneeringly to the rag doll, “If I was her I'd throw you in the bin, straight-away.”

The rag doll began to weep.

Crystal Flower came over and asked what the delay was. Merry Belle told her how fussy Felicity was being. Crystal looked at her clothes and picked out an expensive green evening gown. “Wear this,” she said firmly, “It'll look good against your gold wrap.” Then not giving her time to disagree she had her changed, wrapped in expensive golden wrapping paper, put in a pretty box along with the extra clothes and make up, then covered the box with more gold wrapping paper and labelled it, “Merry Christmas, Penelope.”

Felicity made sure she told Crystal Flower that her box was to be placed on the best part of the sleigh. Dolls, like herself, never travelled economy class amongst riff raff like Sally Stuffing. She was, however, pleased that there was a battery light and mirror inside the box. These she planned to use, on the journey, as she wanted to make sure her make-up was perfect.

“We'd better get you wrapped up warm, Sally,” she told her, “It's a cold night outside. I'm sorry but most of the good stuff has been used up.

“That's all right, Merry Belle,” replied Sally. “When I see the look of delight in Rosa's eyes, it will be warmer to me than the best wrapping in the world.”

Merry Belle packaged her with last year's Christmas paper, put her in an old biscuit tin, where she made her snug with odds and bods like corrugated paper, cotton wool, old dusters and the like that she found round the place. Sally thanked her. Then unable to find any Christmas paper to go round the tin, Merry Belle enclosed it with brown paper and wrote on it in felt pen, “Merry Christmas Rosa.”

All presents were loaded onto pallets and taken by fork lift truck to the sleigh. Felicity felt so ashamed having wished to arrive by limousine.

Then all was ready. It was snowing hard, but that didn't worry Santa, he had travelled on worse nights. And after a glass of brandy (he hoped a few more of those would be left out for him that night), a merry dance and a chorus with the elves, of “Jingle Bells,” he climbed aboard the sleigh, laughed his “Ho, ho, ho,” waved goodbye to Merry Belle, Crystal Flower and the other elves, took the reins and was off.

Speeding, speeding, through the snow,

Dunder and Blixen. at the back,

thunder along with lightning crack.

Prancer and Dancer next in line,

happy pair so fleet and fine.

Comet and Cupid, next along,

are the two to lead the way.

No! Who's that alone ahead?

It's Rudolph with his nose so red,

shining in the darkest night.

On and on the reindeer go,

quicker, quicker through the snow

till their hooves, swift and sound,

move too fast to touch the ground.

Then up they go into the sky:

On Christmas eve these reindeer fly.

To see Santa Claus driving his sleigh and reindeer through the sky with the stars shining in the background and snowflakes gently sprinkling down is one of most magical sights of Christmas. Unfortunately it was not one anyone was going to see at present. The sleigh was speeding through a storm. The wind howled and the snow was thick. Santa Claus could not see his hand in front of his face. But there was one thing he could see and that was the bright red nose of Rudolph.

The sleigh sped on through the storm, swaying wildly from side to side, Father Christmas laughed heartily, singing “Jingle Bells” and other Christmas songs. Inside her box, Felicity was most put out as the jerking of the sleigh had made her smudge make up all over her face.

Suddenly there was a hideous screech.

“Yeee, ya, ha, ha!” it screamed and a witch, on a broom stick, flew past, right in front of Rudolph's path.

Up reared Rudolph! Up reared the rest of the reindeer. The sleigh upturned and down did fall Santa presents and all.

They landed all over the place, in the snow. Some ending up worse than others, Santa, who fell in soft snow soon got up and began to sort things out. Rudolph, having straightened the sleigh up, flew with it and the other reindeer down to Santa, who unhooked them all and sent them flying off in different directions. There were lots of presents to pick up and Santa was going to need all the help he could get to do that.

The storm abated as the reindeer returned with Christmas tree fairies and angels on their backs. Together these shone with a heavenly fairy light so pure and good that anything evil, if it did not flee in time, would be destroyed by it. That happened to the witch, who had caused the accident. She made the mistake of returning to the scene to gloat.

Felicity and Sally. Unfortunately for them, Merry Belle and Crystal Flower did not return with Rudolph, to say who they were going to. They were exhausted after all their work.

Sally lay peacefully in the snow, she had rolled away from the biscuit tin and her wrapping was gone. Felicity was furious. She had hit rocks, her dress was torn, her make-up was a mess and her box and all her gold paper wrapping was gone. She blamed Santa for drinking brandy before setting out and made up her mind to have words with him the next time she saw him.

“Yes I will!” she tried to shout out loud. Tried, but could not. To her horror of horrors she found she could not speak. Neither could she walk, dance, sing or do anything that she had been made to do. In a word, Felicity was broken.

A couple of elves found her and because of the state she was in decided she was not worth much, so they dumped her into Sally's brown paper wrapped biscuit tin. Sally, who was the last doll to be collected, got placed in Felicity's box as all other packaging had been accounted for.

If Felicity had to face the shame of travelling the rest of the journey economy class that was as nothing to being unwrapped the next morning and looking into the face of Rosa Rag. She wished she could scream.

Rosa fell in love with her right away.

“Oh, you poor thing!” she exclaimed kindly, “You're broken! Don't worry, I'll look after you and I'll call you Poorly Pamela, until I get you well.

“What a stupid name!” thought Felicity.

Penelope Prim howled and howled and howled. How could Father Christmas have left this awful rag doll as a present. She wanted to throw her in the bin straight-away, but found she got more enjoyment beating her against a wall. As Sally Stuffing was a rag doll it did not hurt her. In fact she felt rather sorry for Penelope and when the latter had tired of beating her she looked at her with her sad pleading eyes.

“Don't look at me, like that,” said Penelope. Yet, despite herself she began to warm to her.”

"I won't throw you away, Raggy doll,” she told her, “but I can't let any of my friends see you.” Then she thought of the Christmas party. How would she explain no doll to her friends?

To Felicity's disgust, Rosa made up a bed for her and began nursing her.

At the party, Penelope found that all her friends had dolls exactly like Felicity had been. She, to her amazement, found that if she had got the extra special doll she had wanted it would not have stood out.

Her friends wanted to see her new doll. Penelope kept putting it off. Then she decided that her doll would really stand out. Therefore she brought Sally Stuffing to show them. They laughed and laughed, but Penelope quietened them by saying, ”Do you think a girl like me would be seen dead with a worthless doll. No this doll is worth a fortune. Before me no fewer than five princesses owned her.” It was a lie, but it did the trick. All her friends were jealous and she was so proud of Sally Stuffing that she christened her Princess Priceless.

Felicity found feelings in herself which she did not know she had. She was a doll made for show, not for love. Yet Rosa's love woke something in her. It woke her own love. No one had loved her before, but Rosa did and now she loved Rosa.

And, all because of that fall from Santa's sleigh, things fell out well that Christmas, for both girls and  dolls - Penelope Prim with her Princess Priceless formerly Sally Stuffing and Rosa Rag with her Poorly Pamela formerly Felicity Fancy.