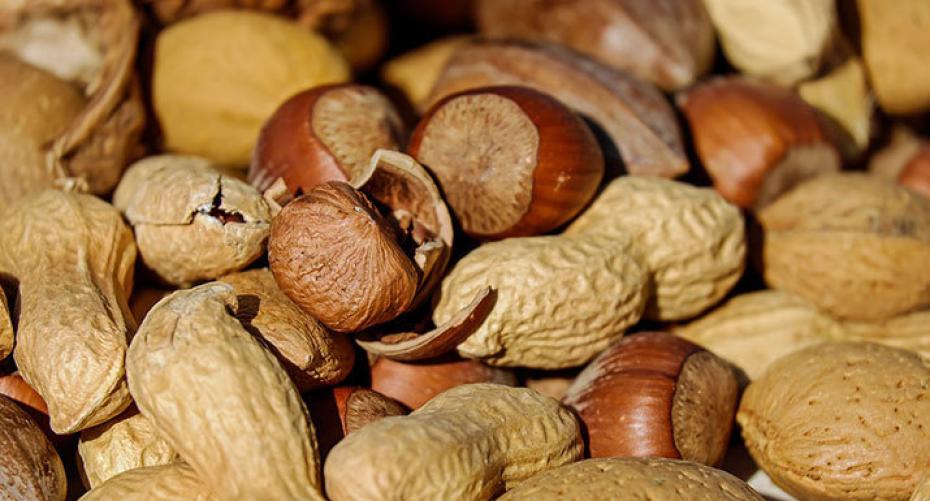 Nuts are tasty, nutritious, versatile and not just for Christmas

Nuts are incredibly good for you, especially in their raw state, so why is it that the majority of us only eat them at Christmas? Unfortunately only the hazelnuts are suitable for us to grow at home in an average garden, unless we are the proud owners of an arboretum! Most of the other species are full sized trees, apart from peanuts which are a low growing herbaceous annual which need tropical and sub-tropical conditions. There is research on-going into the effectiveness of eating nuts as an effective means of lowering cholesterol and other medical conditions. Most studies conclude that eating a moderate amount of nuts each day is extremely beneficial, but caution is required as they contain large amounts of fat and calories.

They can easily be incorporated into lots of dishes both savoury and sweet; especially in sweets widely available at Christmas, such as chocolate covered Brazils and praline.

Almonds are native to North Africa, central Asia, the Indian subcontinent and the Middle East where they thrive in the warm, dry summers and mild winters. They are a deciduous tree, growing up to 10m (33’), and related to cherries, plums and damsons. They can be grown in this country but need a south facing, sheltered frost-free spot; an old Victorian walled garden would be ideal. Wild almonds contain prussic acid, or hydrogen cyanide, but this has been bred out of the cultivated forms, which first appear about 3,000 years ago and also featured in Tutankhamun’s tomb.

They have a range of uses from cakes, sweets, desserts and of course can be eaten raw, but their largest use is for marzipan. Almond milk is a good gluten-free alternative to milk, making it suitable for vegans and those who are lactose intolerant, and for the gluten intolerant there is almond flour. The high oil content make it useful as a skin moisturiser and for conditioning clarinets and oboes.

It is rich in calcium, iron, manganese, magnesium, phosphorous, zinc, potassium, vitamin E, a range of B vitamins, dietary fibre and mono- and polyunsaturated fats. There is some research which suggests that almonds may lower cholesterol.

The trees are pollinated by bees which presents problems due to the worldwide dearth of bees due to colony collapse disorder. The USA is the largest producer, moving almost 1 million hives into orchards at the appropriate time of year. There are self-fertile varieties of trees available but the yield is much lower than the bee pollinated varieties.

This massive tree, up to 50m (160’), is one of the largest in its native South American rainforest, where it occurs as a single specimen. They are long-lived trees, up to 1,000 years, but unfortunately are falling victim to the massive deforestation of the Amazon basin; but it is now illegal to cut down the trees in Brazil. They need bees to pollinate the flowers and the bees do not live in disturbed forest so the trees need a pristine environment to exist; the fruit is ready to harvest approximately 14 months after pollination has taken place. The nuts themselves, from 12 - 20, are contained within a large fruit capsule which can weigh up to 2.3kg (5lb) and the size of a coconut.

They are really rich in beneficial vitamins, minerals, protein, Omega-3 fatty acid, zinc, fibre, magnesium and selenium, which is often difficult to obtain. Unfortunately they are also high in bad fats and calories so a maximum of 5 – 6 a day is recommended. Eat shelled nuts as soon as they are cracked as they tend to go off quite quickly.

There are several species of these nuts, most of which produce a crop, but there are a couple of purely decorative varieties; Corylus avellana ‘Contorta’, which is fantastic for using as a Christmas decoration (and incredibly expensive in the shops) and Corylus maxima ‘Purpurea’ which has large dark purple leaves.

They are invaluable as a food crop for wildlife if you can incorporate them as part of a wildlife hedge. Unfortunately if you want to grow them purely for their yield you may find that a proportion fall victim to the squirrel thieves!

Deer can also be a problem as they love to strip the bark. They produce yellow catkins in late winter and early spring so are a great source of nectar for early flying bees. They have been used in the UK for at least 7,000 years and even today are an important food crop; being used for cooking oil, as an essential ingredient in praline, sweets and desserts and who doesn’t love Nutella (watch our video showing how to cook waffles with Nutella and blueberries on the BBQ). Historically they have been coppiced to provide not only a food crop but also hazel rods for wattle fences, which have been used for corralling stock and as boundaries since Neolithic times, and also as the ‘wattle’ in wattle and daub houses.

Kent is the largest producer in the UK with their cobnuts mainly being sold fresh, Turkey is the largest worldwide producer. They are a really healthy foodstuff, but to obtain the maximum health benefits they must be eaten in their raw state. Research appears to suggest that they may be instrumental in preventing certain cancers and in lowering cholesterol. Their high magnesium levels help increase muscle strength and prevent cramps and muscle spasms. They are also rich in vitamins E and K, manganese which helps strengthen bones and guards against osteoporosis, calcium, zinc, potassium, monounsaturated fat and other essential nutrients.

Peanuts are an annual, herbaceous legume which, like all legumes fix nitrogen in the soil, so if you live in an area where you can grow them (not the UK) they play an important part in a crop rotation system, reducing the need for high nitrogen chemical fertilisers. It is widely produced in tropical and sub-tropical regions, being an important component of many Asian dishes, such as sauces and satay, it is also eaten boiled as a snack; but here in the west we tend to prefer them salted or dry roasted. The nuts have a high oil content and the resulting peanut oil is a popular cooking oil as it has a high smoke point and is high in monounsaturated oils which are much healthier than the saturated oils; it also keeps better than a lot of oils and doesn’t easily go rancid. They have been a part of civilisations diet for hundreds of years with remains being found which have been dated to about 7,000 years ago.

They are a rich source of manganese, magnesium, phosphorous, protein, dietary fibre and vitamins B and E and have a huge range of industrial uses from insecticides to cosmetics and even in the production of nitro-glycerine. Peanuts are one of the main causes of allergies and as they are used in such a huge diversity of products they are very difficult to avoid. There is some scientific research which suggests that a lack of exposure to germs and parasites in early childhood could play a part in suffering from food allergies. Some research has also been carried out into reducing the symptoms of allergic reactions by introducing the offending foodstuff a little at a time until the body has become de-sensitised.

The pecan is a large deciduous tree of the hickory nut species which is native to the southern states of the USA and Mexico. The largest producer is the USA, with pecan pie one of their iconic dishes originating from the southern states. The nuts can be eaten raw, but they are also used for desserts and sweets, particularly praline. They are a good source of the B vitamins, thiamin, iron, protein, magnesium, manganese, phosphorous, dietary fibre and fat, being many times more energy rich than a lot of meats. The trees can produce a crop for a good 300 years.

This large deciduous tree originally from southern Europe, North Africa and Asia Minor is quite tender so will only grow in the warmer south of the UK. They are long lived trees, up to 2,000 years, and play an important role in our ancient forest ecosystem. The nuts are protected by a spiky outer covering to deter predators but is no protection against foraging pigs. They are also a good food source for jays, woodpigeons and squirrels.

The nuts are a good source of vitamins and minerals and are similar in food value to wheat, like wheat they can be ground into flour; the Roman army apparently made the flour into porridge. They can be eaten raw but more commonly they are roasted at Christmas and served as a snack; just remember to remove the outer skin before consuming. They are also used as stuffing for the turkey and the famous marron glace, where they are candied in a sugar syrup. As a coppiced tree they produce rods for pailing fences and the more substantial wood is used for furniture, weatherboarding, fence posts and barrels for aging balsamic vinegar.

These nuts are usually only seen in the shell at Christmas but they are quite versatile and used extensively in sweets, desserts and muesli; they also make a lovely oil for use in salad dressings, it can’t be used for cooking due to its low smoke point. China is the largest producer, 49% of the world total. Rembrandt and Leonardo da Vinci, amongst others, used an ink made from the husks of J. nigra. There is some scientific evidence which suggests that consuming 42.5g (1.5oz) of walnuts per day may reduce the risk of coronary heart disease. There is also some evidence that they can reduce prostrate cancer, aid brain health and guard against osteoporosis. As with Brazil nuts they go off quickly once shelled, don’t discard the outer skin as this contains beneficial nutrients.

Walnuts can be grown in the garden, if it’s large enough, as they need to be grown alone due to their habit of secreting chemicals into the soil which prevent anything else from growing. This strategy decreases the competition and increases the amount of available water and nutrients. This tree can reach a height of 30m (100’) and a width of 15m (50’) so can’t be planted anywhere near to a house.

Place all ingredients into a pan and bring to the boil, stir continuously. Remove from heat.

For more information on how to make the most of your home at Christmas and masses of Christmas BBQ recipes just go to our youtube channel.