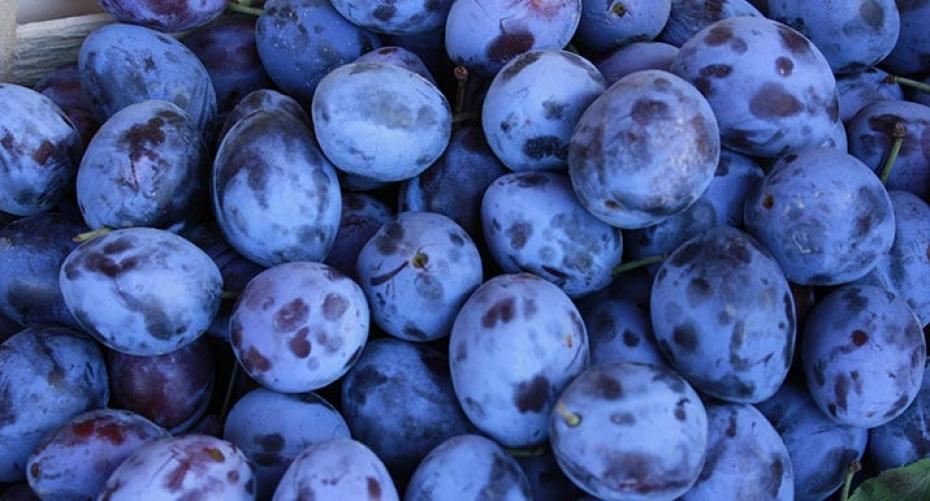 Damson growing in the Lyth Valley of Cumbria

This small plum is thought to have originated around Damascus and to have been brought to this country by the Romans or the Crusaders. The Lyth Valley Damson, Prunus domestica subsp. insititia, is thought to be derived from a Shropshire prune, possibly a variety called Blue Violet. The Lyth Valley Damson is more commonly called the Westmorland, Kendal or Witherslack Damson, Westmorland having now been swallowed into Cumbria. They are now mainly grown in the Lyth and Winster Valleys.

The unique, slightly tart, flavour of the Lyth Valley Damson is thought to be a result of either crossing with Sloes, Prunus spinosa, or Bullaces, which are a type of rounder larger sloe, or evolving directly from the Bullace. Many years ago coaches came through the Valley to look at the Damson Blossom which clothed the sides of the valley. Unfortunately the orchards declined after the Second World War when there was a lack of manpower to pick the Damsons and sugar was scarce for making the jam, which was the main end product of the Damson. As the productive life of the Damson tree is only approximately 50 years, the majority of the trees left in the Valley are now declining. Fortunately there is now an awareness of the importance of preserving Britain’s orchards and new trees are being planted, with grants being available through a number of sources. Awareness is also raised through the increasing popularity of the annual Damson Day country fair held at the Low Farm in the Lyth Valley, where Damson related products are sold alongside other locally produced foods & crafts. This fair is timed, hopefully, to coincide with the blossoming of the Damson trees.

How to grow Damsons

The trees are grown mainly on the sides of the Valley where the soil is drier and sweeter, as the bottom of the Valley is too wet and acidic. They are self-fertile and need moisture retentive free draining soil and will grow in an alkaline or a slightly acid soil but dislike growing in peat. They are relatively disease free and require little maintenance. They may need lower branches removed as they need full sun. A dry spring is required for a good pollination, also no frost, as this can dramatically reduce the yield, especially immediately after pollination. Propagation is by removing the suckers which spring up around the base of the tree; these should produce fruit in 7 or 8 years. Established trees are sometimes available in the garden centre (please phone for availability if making a special journey). There are other varieties of Damsons available such as Merryweather and Early Rivers.

Damsons were traditionally sold to the jam factories in Lancashire. It is also thought that the skins were used to produce a purple dye for cloth manufacturers in the 18th and 19th centuries. Nowadays they are used by several local producers for a variety of products including: jams, jellies, chutneys, beer, gin and wine. They are also used as a topping for pork pies make from locally reared rare breed pigs. They are still used locally for a range of puddings, but as they are comprised of approximately 80% stone, removing the stones can be a somewhat laborious task!

Damsons will be ready to harvest in late summer early autumn & can easily be turned into a rich tasty jam.

It is great on toast, with cheese or try mixing it with ginger & chilli sauce then brushing it onto the crispy skin of a roasting duck to give a bit of zing to your Sunday dinner.

From Windermere, travel into Bowness, turn onto the A5074 opposite St Martin's church and keep on that road for approx 9 miles.

From Kendal, take the A6 South then follow the directions for Barrow onto the A590, turn right onto the A5074 at P V Dobson' garage, approx 4 miles.

From Barrow, take the A590 east and follow the direcyions for Kendal, turn left onto the A5074 at P V Dobson's garage, approx 4 miles.