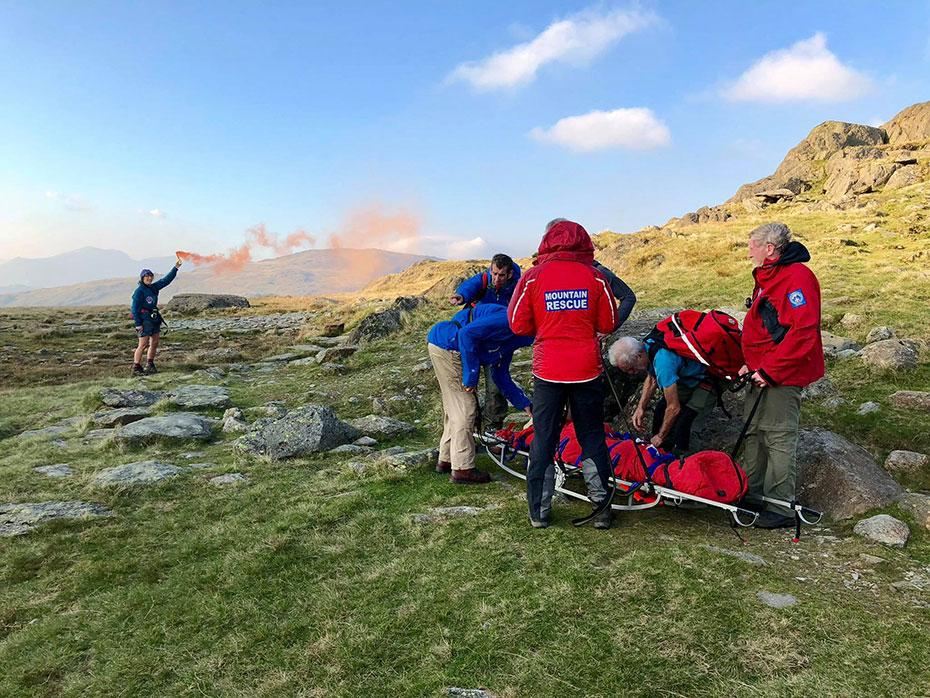 Be brave and take the first step to follow your dreams

This story is about one of our sales team here on the internet at Hayes Garden World and is a true inspiration as to what is possible when you are brave enough to take that first step. It is written by Jenna Maryniak and first appeared in the Spring 2018 edition of Trail magazine and it is with their kind permission that we reproduce it here:

"ALL I KNEW WAS THAT I WAS HOOKED"

“I was at a low point in my life when I saw the Coniston Mountain Rescue’s collection box in the local newsagent, and thought ‘maybe I could be of use to someone, even if it just means making the tea’”.

That was 10 years ago, and Janice Hamilton, now aged 62, is Lead Casualty Carer and Assistant Team Leader for Coniston Mountain Rescue.

“It was actually a TV series that first gave me the idea. It was called Rockface, and it was a drama about Scottish Mountain Rescue. It made me wonder whether perhaps I could look after people. I loved being out in the mountains with my dog, but I was just a walker and never dreamed I’d have the skills to be part of the rescue team”.

Janice contacted Coniston’s team secretary and arrived on her first day offering to make tea and be a general dogsbody, but instead ended up tagging along on a rescue.

“It was every bit what I’d imagined but didn’t expect to be part of! A helicopter whirring above us (I was half-convinced it was going to drop on me!), a man on a stretcher… then the next thing I knew I was being asked by the helicopter paramedic to hold a rope (I didn’t have a clue what it was then, but it was a high line), and the casualty was flown off to hospital. It was all very dramatic – and what a buzz I got! All I knew was that I was hooked.”

At first, Janice didn’t think she would fit in, but instead she found a lovely bunch of individuals who all looked out for each other. “I now see it as a second job,” says Janice, who’s day job is a full-time internet administrator for a garden centre. “We get around 50 rescues a year in the Coniston area and I’ve been on almost every rescue in my 10 years on the team.”

Freedom of the hills

Janice started hillwalking at 18. “It was my ex-husband who introduced me to it properly, but it was once I got divorced that the love of the outdoors really took over. The first thing I did was trek to Everest Base Camp, something I had always wanted to do. The mountains were magical, but I just didn’t enjoy being part of a group, so from then onwards I walked on my own with my dog.”

Although Janice still gets away on long-distance walking holidays occasionally, her commitment to Mountain Rescue has changed her life somewhat. “Very rarely do I now leave the village to go walking in other parts of the Lake District in my spare time. Even taking my dog, Harlie, out for her late-afternoon walk at weekends, in the accident witching hours of 12 – 5pm, I am always a little on edge. I’m always thinking… if we have a call-out, how can I get home quickly? It’s silly really, because at weekends there are other Casualty Carers available who are just as capable. But it gets under your skin, it really does… that feeling of needing to attend to an incident, the guilt if you can’t make it. Last February there was a serious incident where a walker slipped off the ridge of the Old Man of Coniston. Shortly afterwards a second call-out came through for a casualty on Brown Pike. Where was I? Enjoying myself on Bow Fell. It really ate into me that I wasn’t there, although I went straight to the Base when I got back into Coniston, and was the last to leave. So, my life is not really my own as it used to be in terms of freedom. But it is my choice.”

When it comes to responsibilities, Janice is qualified to give drugs, including morphine, to casualties. She will attend the call-out with other team members, carrying the drugs and medical supplies, and assess and treat the casualty. “I’m lucky actually,” she says, “as in bad weather I am usually warm and cosy with the casualty in a shelter, while other members are out in the cold putting the stretcher together.”

A most wonderful feeling

The first time Janice was called to an incident as Casualty Carer around five years ago was her most memorable rescue. “We got a call-out to a man who had fallen down South Rake on Dow Crag. It’s a long walk in, with a subsequent negotiation through boulders and then a steep scree slope, but South Rake is the easiest of several gullies – just a scramble, which I had previously done.”

When the team reached the bottom of the gully, it eventually become clear that the casualty was not in South Rake at all, and had instead climbed about three-quarters of the way up the more difficult Easy Gully, and fallen around 10m (30ft).

“I was a little nervous about reaching the casualty, as I wasn’t a climber,” says Janice. “I had to scramble up the rocks as best I could with the heavy First Aid sack. I reached the casualty on a small, cramped area of the gully and I tried not to think about the precariousness of our position.

“The man was very stoic, and having checked him over I deduced that he probably had a broken pelvis and was bleeding internally. His pulse and oxygen level were becoming increasingly worrying. It was the first time I actually gave orders, and I couldn’t quite believe it was little old me dealing with a situation like this.”

The helicopter paramedics were unable to get a line into the casualty, so the team had now to get him to the bottom of the gully and onto safer ground as quickly as possible, before he could be winched up and off to hospital. “I improvised a pelvic splint by using two leg splints secured round his pelvis,” explains Janice. “He was then loaded onto the stretcher which the other four members were able to assemble even in the confined rocky space… all credit to them. He was then gently lowered down using the rope system set-up, not an easy task at all.

Once the patient was down, I suddenly realised that it was much harder to get down than it had been to climb up! The relief was enormous when I was back with the rest of the team.”

The casualty did indeed have a badly broken pelvis. “He was lucky as it could have been much worse,” says Janice. “It was a momentous experience for me, as it was the first time I’d had the responsibility of being the only Casualty Carer, although I couldn’t have done it without the support of those on the crag that day. To actually have saved a life is the most wonderful feeling!”

Being on the Mountain Rescue team provides some incredible opportunities for training. As well as the External Trauma exam to become a casualty carer, training can involve external trauma, rope rescue, avalanche search, major incidents, helicopter rescue, power boat training, methodical search including with SARDA dogs, winter mountain skills, and most exciting of all, off-road training in the Land Rovers. Janice says, “During my last 4x4 training session, I was so determined to get the vehicle over a boulder patch where it had previously got stuck, that I nearly took off… I certainly managed to scatter fellow members who were watching! I’ll leave the driving to safer hands!”

In fact, there’s not much that stops Janice. In the summer of 2011, Janice’s Rottweiler. Teazle, began acting strangely towards her and prompted her to discover a lump in her breast. She was subsequently diagnosed with breast cancer, but even after a mastectomy and six months of chemotherapy Janice still attended call-outs and training. Then in September 2016, she underwent a total knee replacement, but still nine weeks later she was stood on the top of the Old Man of Coniston.

For Janice, her 10 years in the team has been a life-affirming and life-changing experience. “This week I have had four nights surviving on toast and cereal… a call-out, a Base visit, a First Responders AGM (I am also a Community First Responder for Coniston) and a MR committee meeting. The reward is that after years of feeling a bit useless, I now have a sense of self-worth which I’ve never known before. I just feel privileged that the team trusts me, a simple soul, to do the job.”

WHAT DOES IT TAKE TO BE A MOUNTAIN RESCUE TEAM MEMBER?

→ Enjoy being out in the fells, whatever the weather throws at you.

→ You needn’t be a climber or medical professional, as the relevant training is provided. However, a willingness to learn and assist as required is definitely a must.

→ Show commitment to attending call-outs and training when necessary. Also helping out at fundraising events is really appreciated.

→ Be willing to carry equipment to a casualty, and then help carry the stretcher. An ordinary walker can meet this objective without having to be a superhero!

Coniston Mountain Rescue was the first ever official Mountain Rescue team and is completely reliant on charitable donations. Go to http://conistonmrt.org.uk/ to find out more or donate.

(pictures did not appear in the original article)