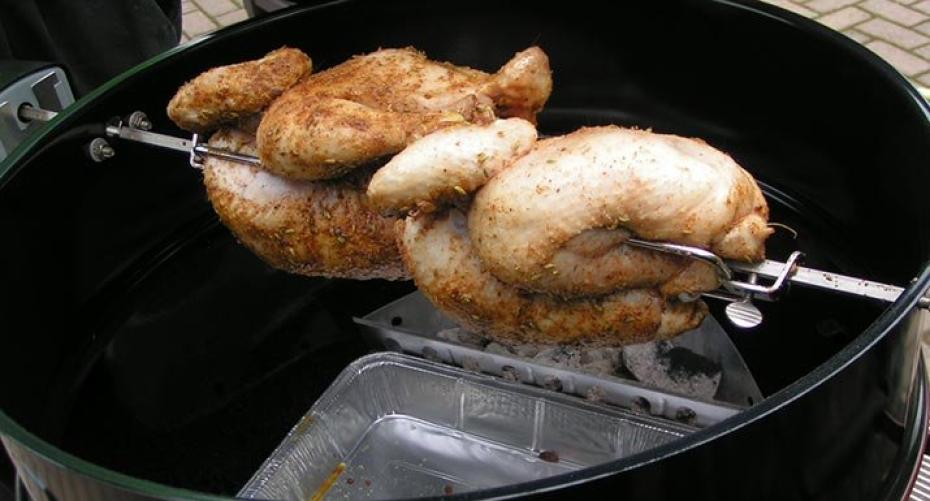 Once you’ve roasted a chicken on the barbecue you won’t be going back to cooking it in the oven, it’s completely different. Much more flavour, tenderer and juicier. In this video Richard Holden, the Gourmet BBQ chef, shows you how easy it is to cook a whole roast chicken on the barbecue. We are cooking it on a 57cm Weber charcoal BBQ with a rotisserie attachment. The rotisserie ensures that the chicken is cooked evenly all around. Avoiding the dreaded salmonella is really easy with an Instant Read Temperature Probe; just probe the chicken in at least 4 different places and once it has reached a temperature of 75C it is thoroughly cooked. The chicken was sourced locally from award winning Higginson’s Butchers, Grange over Sands, Cumbria.

The chicken has just been prepared with a rub of dried coriander, cumin, paprika, oregano, fennel seeds, soft brown sugar, sea salt and ground black pepper, made into a paste with the addition of a little rapeseed oil. One of the keys to successfully roasting meat on the BBQ is to use the indirect cooking method, where the baskets of hot coals are placed to each side of the BBQ leaving a gap down the middle. The rotisserie is positioned so that it is directly over the area where there are no coals; if you place the chicken directly over the coals it is too hot and the outside will burn before the centre is cooked. This is when you leave yourself open to the threat of salmonella. Place a foil tray on the charcoal grate between the char baskets to catch any juices which drip from the chicken; this keeps the bottom of the BBQ clean and the juices can be used for gravy.

Click here to see when we have future BBQ demonstrations in store.

Sleep with your Christmas tree
How having a Christmas tree in the bedroom can lead to a better night's sleep After what’s been a…
December
Well, November is seeing itself out with windy weather & blustery showers spreading across the…
How to decorate a small space at Christmas
No space doesn't mean no decorations We all imagine a lavishly decorated home at Christmas with a…