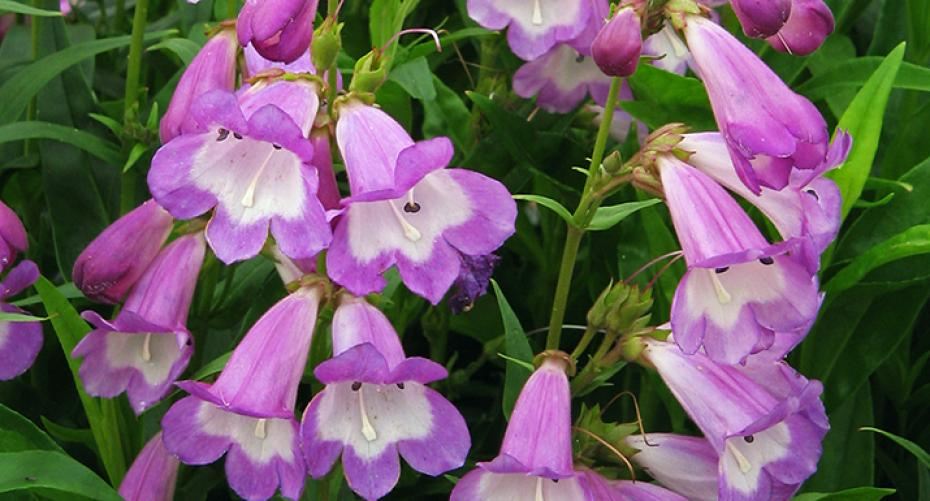 How To Have Perfect Penstemons

If you are looking for late summer colour then look no further than the pastel shades of floriferous Penstemons. Flowering from early summer through to October, they are easy to grow and come in a variety of shades from soft pinks to deep purples, even reds, often with pale throats to the flowers. They will grow in any fertile, reasonably moist, free-draining soil in full sun to light shade and are happy in mixed herbaceous borders or tubs. They are resistant to garden pests and loved by bees, making them a valuable source of nectar later on in the year.

There are many different penstemons to choose from but we have some new varieties available in the Garden Centre this month which form part of the ‘Pensham’ Penstemons range. These varieties have been bred to withstand lower winter temperatures and to flower for longer periods even through the inclement British weather. Pensham Penstemons were originally bred by the late Edward Wilson of Pershire Plant Raisers. He spent over twenty years as a Penstemon breeder along with his wife Stella in the village of Pensham and received many accolades & awards for his work.

Penstemon ‘Pensham Czar’ (main image) – has lovely purple rimmed flowers with a white throat on upright stems from July to October. This is a semi-evergreen variety which has been bred to withstand heavy rains and strong winds. It is borderline to fully hardy with an eventual height & spread of 70cm (28”) x 40cm (16”).

Penstemon ‘Pensham Plum Jerkum’ – has rich plum coloured flowers which blend to dark red before slipping down the mottled throat. The flowers are borne on upright stems from July to October. It is borderline to fully hardy with an eventual height & spread of 70cm (28”) x 40cm (16”).

Penstemon ‘Pensham Amelia Jane’ – has cherry red flowers with a white throat that are borne on upright stems from July to October. It is borderline to fully hardy with an eventual height & spread of 70cm (28”) x 40cm (16”).

Penstemon ‘Pensham Eleanor Young’ – has dark crimson flowers with a mottled white throat that are borne on upright stems from May to November. This is a vigorous, semi-evergreen variety which forms bushy clumps. It is borderline to fully hardy with an eventual height & spread of 80cm (32”) x 60cm (24”).

Penstemon ‘Pensham Laura’ – has vibrant pink flowers with a white throat that are borne on upright stems from July to October. This is a prolific flowerer which has been bred for slug damage resistance. It is borderline to fully hardy with an eventual height & spread of 70cm (28”) x 40cm (16”).

Ideally penstemons should be planted in spring to give them a chance to establish themselves before flowering. Enrich the planting hole with well-rotted compost and a general purpose fertiliser then water well, add grit and sharp sand if your soil is heavy. As the season progresses, keep deadheading spent flowers to encourage flowering well into autumn. Many penstemon varieties are hardy in all but the coldest areas, however harsh winters and heavy, waterlogged soils can take their toll so it is often best to take some precautions to avoid losing your plants. As winter approaches leave most of the top growth on the plants as this will afford some protection to the crown of the plant and to new shoots appearing next year, adding a layer of mulch may also help in overwintering stock. In late April/early May, when new shoots have appeared at the base, the old stems can be trimmed back. If there are only a few or no new shoots growing from the base of the plant it is best to trim the old shoots back to just above the lowest set of new leaves then tidy the area around the plant.

As many penstemons are not reliably hardy and are sometimes considered a short-lived perennial, the best way of ensuring their survival is to take cuttings. Although September is a good time to take cuttings from your established penstemons, softwood cuttings can be taken any time during the growing season and vigorous cultivars may even give you a display later the same year. A softwood cutting is a non-flowering stem about 10cm (4in) long, cut just below a leaf. Remove the bottom two leaves and trim the top and side leaves by a third to reduce moisture loss. Dip the cut ends in hormone rooting powder and insert around the edge of a pot containing a 50/50 mix of compost and grit or perlite and water in. Rooted cuttings just need cool, ventilated frost free conditions to survive over winter.

Penstemons can be used in a variety of settings including mixed borders, themed plantings or simple single species container plantings for the patio. In an herbaceous border you can mix in generous clumps of penstemons with a huge variety of shrubs and perennials to give a lovely cottage garden effect. Try using hardy geraniums, late flowering roses, sedums and dark leaved Heuchera. Alternatively, go for a prairie look with swathes of Echinacea purpurea and grasses including the purple-hues of the bottle-brush flowerheads of Pennisetum villosum. Whichever planting scheme you choose, the long flowering season you get from penstemons make them a very worthy choice for your garden!

Careers at Hayes
Make the change and join the Hayes family Hayes Garden World has been in the same family since it…
Let’s Take a Look at Summer 2021
What we're going to be doing in our gardens this year It’s been a long time since we’ve been able…
Looking good
STORE NOW OPEN 7 DAYS; MONDAY - SATURDAY 09:00 - 5:30, SUNDAY 10:00 - 5:00 The Internet Department…