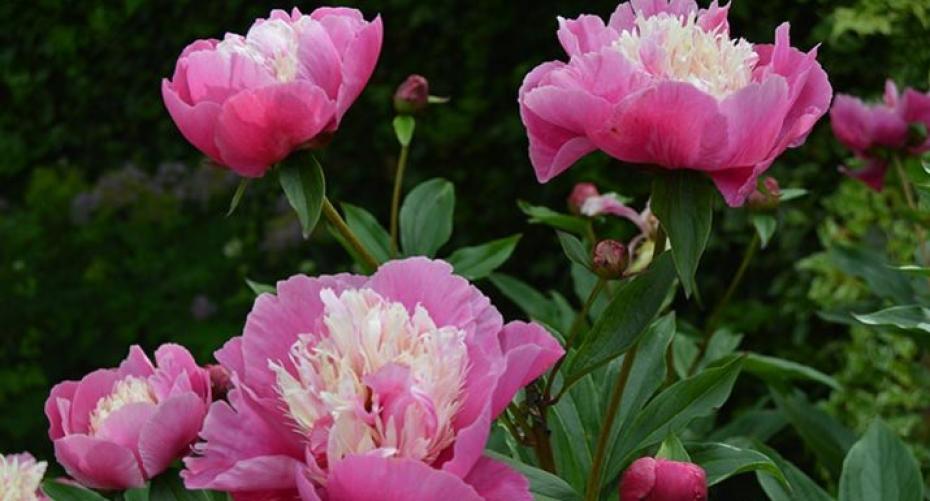 How To Grow A Profusion Of Paeonies

Nothing heralds a glorious summer to come quite like luscious paeonies

For sheer voluptuous exuberant blooms in early summer look no further than Paeonia; they only flower for a short time but are well worth the wait. They may only flower for a short period but they are very long-lived plants needing very little maintenance. There are about 33 species with the herbaceous varieties being native to western North America, Asia and the southern Mediterranean. The tree paeonies are a woody perennial, native to the mountainous regions of eastern China; requiring almost the same growing conditions as the herbaceous plants. As they have woody stems they remain above ground in winter, just losing their leaves, unlike their herbaceous relatives who lose all their foliage.

Paeonies have been cultivated in China for about 4,000 years and are still culturally significant. The root of the P. lactiflora has been used in traditional medicine in China, Japan and Korea for as long as it has been cultivated in these regions. Monks north of the Alps first cultivated them in monastery gardens in the early Middle Ages; in 1784 they were widely introduced into the rest of Europe, with an explosion of new varieties taking place in the 19th C. In the Middle Ages the root was used to cure nightmares, stomach ache, jaundice and lunacy, amongst many other ailments. It is currently the subject of medical research into its many healing properties. They were also planted to protect crops and drive away storms and evil spirits.

Paeonies in the herbaceous border at Sizergh Castle

Most of the plants offered for sale in garden centres are the herbaceous hybrids and the tree paeonies. They are completely hardy, needing a period of cold to flower at their best. If they are planted in a mixed herbaceous border their lack of flowers for most of the year is overcome by there being other areas of interest; the leaves provide autumn colour as most of them turn red. The herbaceous species can vary in height from 0.5 – 1.5m (20” – 5’) tall, whereas the tree paeonies can reach a height of 300cm (10’). Many of the herbaceous varieties are fragrant. They flower in late spring to early summer and come in a range of reds, pinks, yellow and white. They are ideal for anyone plagued by rabbits and deer as they are one of the few plants which they don’t like!

If you are growing them for cut flowers just allow one bud to form on each stem, cut off any side buds, this will result in one large bloom rather than a few small ones. Each bloom should last for 10 – 15 days if it is picked as soon as it starts to show some colour. Cut it in the morning or evening whilst the stem is full of water and place immediately into a bucket of water. Cut the stem diagonally across the bottom to ensure it has the maximum surface to take in water; the stem rests on the point on the bottom of the vase, if it is cut straight across there is a chance that the cut surface will rest on the bottom and won’t be able to take up water. To ensure as long a life as possible change the water every couple of days.

If you are collecting seed from an established plant just leave one or two heads on the plant to set seed, as seed production takes energy away from building up the root system. Sow the seed on the surface of good quality peat-free seed compost in autumn and cover with a thin layer of sieved compost. Place in a cold frame to germinate, this can take up to 2 years. Prick out the seedlings in May when they are large enough to handle. Grow them on in the cold frame for a further 3 – 4 years until they are large enough to plant out into the border in early autumn. Raising paeonies from seed is a slow waiting game and they will not come true to the parent plant, but they are certainly a challenge for anyone with patience.

Plant in rich, well-draining soil preferably in full sun; they will tolerate a little light shade in the middle of the day but will not flower well if they are too shaded. A little light shade will also help the blooms last a little longer. The single flowered varieties seem to fare better in the shade than the larger flowered types. They need to be well away from trees or large established shrubs as it is too shady and the soil is too dry and impoverished. They need some moisture but if the soil becomes waterlogged in winter you will almost certainly lose the plant. Give them at least 1m (40”) of space all round; spring bulbs can be planted in the space to give some early colour until the paeony comes into leaf. Don't plant them too close to other plants as they need good air flow to discourage any fungal infections. They are not fussy about soil type but given the choice would prefer a slightly alkaline soil. They do not like heavy clay soil so you must improve the drainage by adding coarse structured organic matter, some horticultural grit and a little lime.

Planting depth is crucial, make sure the base of the eye is no deeper than 5cm (2”) below the soil surface. If you buy your plant from a reputable supplier they should be planted to the right depth in the pot, so plant to the same depth as it is in the pot. Make a hole 30cm (12”) across by 30cm (12”) deep and fork in some garden compost or well-rotted farm manure plus a handful of bone meal or general purpose fertiliser, such as Growmore. Make sure the fertiliser is well worked into the soil as if it comes into contact with the roots it can burn them. If the soil is damp when you plant there is no need to water, if it is dry just give it a little water. They may not flower the first year after planting so make sure you plant in the correct position as they really dislike being moved.

They are not suitable for planting in containers as they eventually have a substantial root system and will soon outgrow any pot and stop flowering.

Only water if there is a prolonged drought and the plant has not had time to put down a good root system, it really dislikes being overwatered. Once the buds emerge give it a dressing of super phosphate and calcium nitrate to improve the flower size; potato fertiliser can be used as a substitute. Lightly fork in the fertiliser, so don’t feed close to the crown as you could damage the tuber; feed about 15 – 45cm (6 -18”) away. A dressing of lime in the autumn will also be beneficial. Don’t feed with a high nitrogen fertiliser as this just produces a lot of leafy growth which is susceptible to fungal infections and pest attack. It is not necessary to mulch but if you do, use bark as straw or compost can harbour fungal infections; keep the mulch away from the crown as it can lead to rotting. Weed by hand close to the plant as the tuber and roots can be damaged by hoeing. Most of the herbaceous types need support as the heavy heads are easily damaged in rain and strong winds. After heavy rain it is advisable to shake the water out of the blooms as soon as possible as if left the heads can break and they are liable to rot. Leave the foliage to die down naturally as the leaves need to photosynthesise in order to build up the root; once the foliage has died down clear away so that it doesn’t harbour any fungal infections or overwintering pests.

This is best done in the autumn when the plant is dormant and the foliage has died down; only split if the clump is large and it isn’t flowering very well as once you have split the tubers they may not flower for a couple of years. You may only need to do this every 20 years! Dig up the plant and wash all the soil off the tuber, remove any dead woody sections. Cut the healthy tuber into sections, each with between 3 – 5 eyes. Re-plant as described above.

Botrytis paeoniae (Paeony Wilt) can be a problem in a wet summer; at the first sign take off and destroy any infected leaves.  It usually occurs either just before or just after flowering; the stems rot and collapse. In autumn make sure you remove and destroy all the dead foliage.

Aphids can be a problem as they are attracted to the new fresh growth which leads to curled stunted leaves. You can rub them off between thumb and forefinger if the infestation is only light otherwise spray with a solution of washing-up liquid and water or feed the birds and they will do the job for you.

Thrips can cause the flowers to be deformed; look for signs in leaf axils. Spray with a soap based spray or use natural predators.

Ants can be attracted by the sweet sap on the buds which are about to open; once the buds open they usually disappear.

Amillaria melea (Honey Fungus) can strike the tree paeonies; the only remedy is to destroy the plant, either burn it or dispose of it in the grey bin, and don’t re-plant with woody species.

Paeonies not flowering is a common complaint and most commonly is caused by the plant being planted too deep, the plant being too young and just isn’t ready to flower or it is in too shady a position. Botrytis and thrips can also affect flowering. Some varieties will only open their buds if the weather is ideal; if your plant is a variety routinely sold in garden centres this is unlikely to be the case. If it is planted in a container it will cease to flower after a few years as the compost becomes exhausted.

‘Coral Charm’ – semi-double variety in an unusual colour; it starts out salmon pink then turns orange and finally yellow.
‘Duchesse de Nemours’ – double creamy white flowers with a good scent.
‘Early Windflower’ – single pure white with golden stamens; looks like a Japanese Anemone. It is excellent for a woodland garden as it doesn’t mind dappled shade. It doesn’t set seed.
‘Eden’s Perfume’ – triple flowered with the outer ring of petals being pink, the second layer is cream tinged with pink and the inner layer is pink again. Some claim this to be the most fragrant of the paeonies.
‘Illini Warrior’ – single flowered in a gorgeous dark blood red.
‘Karl Rosenfield’ – is a fully double crimson red.