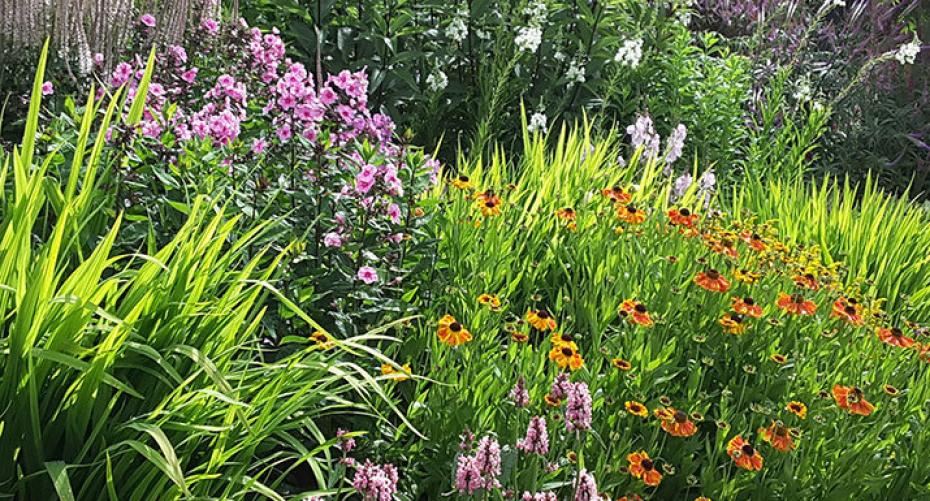 How to grow phlox

Phlox are a genus of 67 perennial and annual species native to North America, with one exception. They come in an array of colours; white, pink, red, lilac, blue, orange and bi-colours. The most common forms are P. paniculata, the tall growing favourite of the herbaceous border and P. subulata the low growing form ideal for softening the edge of the border or tumbling down the rockery. The tall growing varieties are fantastic in a large border as they produce a huge mass of colour and make ideal partners for campanulas, delphiniums and old roses. They are hardy and need very little maintenance, the main problem being that they are susceptible to powdery mildew so need some space around them to ensure a good airflow. Modern varieties are more resistant to this disease than old varieties and may be labelled as so, but there are many forms of mildew and they will only be resistant to a few so could still become affected.

Their greatest asset is their scent which fills the air on a warm summers day, they are also a haven for bees and butterflies. Phlox paniculata reaches a height of 120 – 180cm (4 – 6’) in the wild but most of the modern varieties have been bred to grow to around 90cm (3’) to enable them to be better able to stand up to the weather. The smaller Phlox subulata grow to a height of about 15 - 30cm (6 – 12”), are semi-evergreen and make excellent ground cover. Taller varieties will need some form of staking but the shorter growing plants are a lot sturdier and may be able to get away without any support. These large herbaceous phlox usually flower between July and September but if you cut down about half the stems at the end of May you can extend this flowering period well into September, as it will produce fresh new growth.

They need a nice sunny site with rich moisture retentive soil, but they will tolerate a little shade; too much shade could provide ideal conditions for mildew to thrive. Enrich the planting hole for P. paniculata with either compost or well-rotted farmyard manure and a little blood, fish and bone. When planting P. subulata just enrich with a little fresh compost, if you give them too much fertiliser they will lose their nice compact habit and grow too big and straggly. Plant P. paniculata just a little deeper than it is in the pot, but P. subulata needs to be planted at the same depth as it is in the container. Water after planting and until it becomes established.

Keep well watered, especially vulnerable is P. subulata when planted in a rockery; water at the base to avoid wetting the leaves which could encourage mildew. Cutting out half the stems of P. paniculata at the end of May encourages a burst of new growth which will extend the flowering season into late summer/early autumn. Keep deadheading to encourage the plant to keep on producing more flowers. When P. subulata has finished flowering cut it back and it will give you a second flowering in late summer. Feed them with a balanced fertiliser in spring and a second feed in summer for the large varieties. In early spring cut back P. paniculata then feed and water and mulch with compost. They will need digging up and dividing every 3 – 5 years as the centre will become woody and produce few flowers.

Phlox subulata is even easier, just cut out any old woody stems as these don’t produce any flowers. Once it becomes bare in the centre remove it in spring and take off the new fresh growth from around the outside and replant. This may need doing every 5 years or so.

Lifting and dividing is the easiest method and done in spring or autumn, but you can also take basal cuttings in spring when the new shoots emerge, just pot them up in a 50/50 mix of potting compost and Perlite.

Powdery mildew is the biggest nuisance but you can take steps to guard against it by buying resistant varieties, making sure they are well watered, not growing in too much shade and that they are not too crammed in the border, ensure they have a good airflow. If you do have a variety which is prone to mildew you can spray with a fungicide in late spring to try and prevent it happening otherwise take off the affected leaves and cut out any stems if it is widespread. Click here to read the blog telling you how to deal with powdery mildew.

Stem eelworm is also another threat which manifests itself in the form of thin distorted leaves and split stems. Unfortunately there is no cure, you will have to burn the plant, but you can take root cuttings which should be free of the pest.