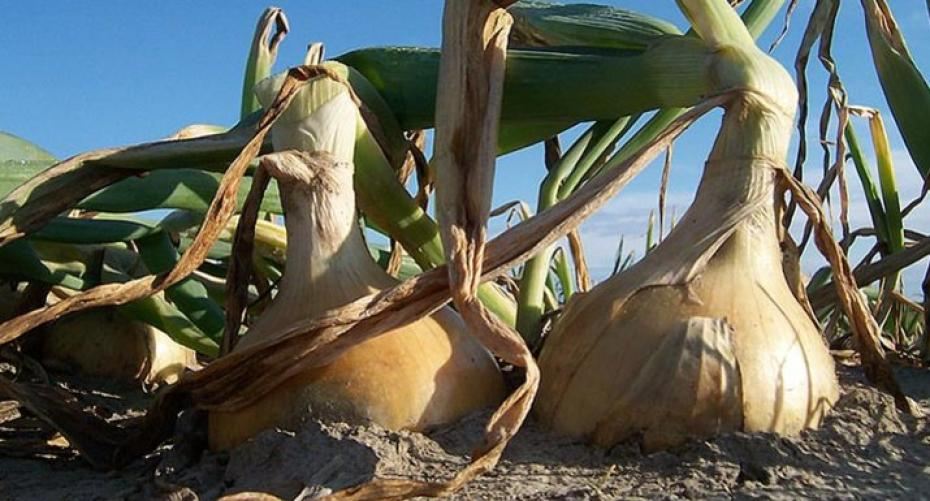 How To Grow Onions

Onions are the most versatile vegetable and a worldwide favourite

Onions are one of the most versatile vegetables and are cultivated worldwide, with an estimated 9,000,000 acres grown. They are an Allium, a family which includes both edible and ornamental species. They are known to have been cultivated for at least 7,000 years. The health benefits are alleged to include: lowering blood pressure and reducing cholesterol and fat levels. They are also alleged to contain anti-inflammatory and anticancer properties and antioxidants. They are low in calories, fat and sodium and contain vitamins C and B6 and folic acid.

There are three colours of large onion bulbs: yellow/brown, red and white. The yellow and red onions have a balanced sweet/astringent flavour and are good all-rounders. White onions have a sharper flavour. The skins of yellow onions can be used to dye pace-eggs at Eastertime. Chopped onions, covered with boiling water and left to cool produces an environmentally friendly pesticide.

Chopping onions can irritate the eyes; this allegedly can be prevented by chopping under running water on in a basin of water. Leaving the root end intact whilst chopping reduces the amount of gas released, as this part of the onion contains most of the irritant gas. Refrigerating before chopping is also said to cut down on the amount of gas released. The eyes apparently become more immune to the gas the more they are exposed, so the more you eat the less the irritation.

They are grown either from seed or from sets (small immature onions), which crop more reliably than seed. Choose a sunny, sheltered site with well drained, fertile soil. If the soil is sandy you will have to incorporate some organic matter, such as peat-free or garden compost. If the soil is heavy clay incorporate some grit and organic matter in order to improve the drainage. Don’t plant in freshly manured soil as this can lead to rotting. They prefer a neutral to alkaline soil so add a dressing of lime to acidic clay soils. Sandy soils are low in sulphur whereas clay soils are quite high so they will produce a more pungent bulb than those grown on the sandy soil. They are best grown in open ground or a deep raised bed, they will not do any good grown in grow bags. They need as long a growing season as possible so sets planted in autumn will be ready to harvest from June, and a spring sowing should be ready from August.

Seeds can be sown in modules in late winter, January/February, and kept in a heated greenhouse, 10 – 15C (50 – 59F). Sow 5 – 6 seeds per module into damp seed compost. Cover with vermiculite and label. As the seedlings grow, thin out the weaker ones. Plant out into the onion bed when the soil has warmed and the frosts have finished. Plant in rows 20cm (8”) apart and each plant 10cm (4”) apart. They can be sown directly into the soil but wait until late February/ early April. Rake the soil to a fine tilth and sow 13mm (1/2”) deep in rows 20cm (8”) apart. Remove the weaker seedlings until they are spaced approximately 10cm (4”) apart.
Sets can be planted in autumn (September to November, depending upon the weather) and spring (mid-March to mid-April). Plant 10cm (4”) apart in rows 20cm (8”) apart. Firm in leaving just the tips showing. They are easier to grow than seed, but you don’t have as wide a choice of varieties. Try and choose sets which have been heat-treated as this process kills the flower embryo and renders them less likely to bolt and run to seed. Sets are more reliable in cool, damp areas than seed. It may be necessary to protect them as pigeons love to pull them up.

Make sure they are well watered, but not sodden, in dry weather. Feed with a balanced liquid fertiliser every 2 – 3 weeks, then in June give them a dressing of sulphate of potash, to the dose recommended on the pack, this helps to ripen the bulbs. Keep the weeds down as they compete for feed and moisture; a mulch of garden compost would help suppress weeds and conserve moisture. Remove any flower spikes as soon as they appear as the plant will put energy into producing seed instead of making a decent bulb. When the bulbs have reached a good size stop any feeding and watering. Expose the bulb to the sun by removing the mulch and soil. They are prone to bolting or running to seed; this can be caused by a late, cold spell or becoming dry, so make sure they are always well watered.

Don’t bend over the foliage, leave it to turn yellow and bend naturally. Leave them exposed to the sun for 2 – 3 weeks then lift carefully without damaging the bulbs. Lay them out in the sun to dry or in a shed if the weather is wet. Only keep firm, clean bulbs for storing; use any which are showing signs of mould or which have thick necks, as these are prone to neck rot. Discard any which have gone soft. Seed grown onions can be harvested young as spring onions.

Once the foliage is dry and crisp, they can be hung up in nets, plaited, laid out in apple drawers (away from any fruit) or stored in tights by tying a knot between each onion. Store somewhere cool and dark. The length of time they can be stored depends upon the variety grown, but they need to be checked for any deterioration every couple of weeks.

White onion rot is a fungus which is characterised by yellow, wilting leaves. When you lift the bulbs they will show a white, fluffy mould. They must be lifted and if possible burned, do not put on the compost heap. It is a long lived fungus for which there is no chemical control. Don’t replant that piece of ground with onions, garlic or leeks for at least 10 years.

Downy mildew is characterised by greenish grey fuzzy patches on the leaves and is worse in wet weather. It can become a serious problem for which there is no effective control so lift and burn any infected plants as soon as it is spotted. Make sure there is a good air flow by not planting too close and keeping down the weeds.

Leek rust is characterised by yellow/brown spots on the leaves and is exacerbated by long wet spells. A mild attack will not affect the yield, but a serious attack which causes the leaves to shrivel will. A humid atmosphere encourages the fungal growth so leave plenty of space between the plants and keep weeding regularly, this should encourage a good air flow. There is no control so burn infected plants and don’t plant onions, garlic or leeks on that patch of ground.

Onion fly larvae eat into the roots of the bulb and in summer burrow into the bulb. Remove and destroy any infected bulbs as soon as they are spotted, before the larvae start to pupate in the soil. Sets are more resistant than seed sown onions. Plant companion plants such as carrots or calendulas to mask the smell.

Onion thrips are small black or yellow winged insects about 2mm long. An attack is characterised by white mottling on the leaves, if it gets too bad it will affect the yield. They are more numerous in hot, dry weather so spraying with a fine hose should keep their numbers down. Try and encourage predators such as lacewings by companion planting. Mulching cools the soil and also provides a barrier to the pupa, which moves from the soil to the plant.

Heat oil and butter in a large frying pan until foaming. Add onions and season. Cook over a low heat for 5 mins stirring regularly. Add sugar, cover pan and cook for 10 – 15 mins until juices have run out of the onions. Uncover pan, increase the heat and cook for a further 20 mins until thickened. Add the vinegar.

Rub all ingredients together to form a fine crumb. Add 3 – 4 tbsp cold water to form a ball. Knead lightly until smooth. Roll out and line the base and sides of a loose bottomed 25cm (10”) flan tin. Prick the base with a fork and chill for 30 mins. Preheat oven to 190C/375F/Gas 5. Line with baking parchment and fill with baking beans. Bake for 15 mins. Remove beans and parchment and bake for a further 10 mins until golden.

Beat together all the ingredients, except goat’s cheese. Mix with the onion marmalade. Season. Pour into flan case and arrange goat’s cheese on top. Bake for 30 – 35 mins until lightly browned. Remove from oven, cool, remove from flan tin.