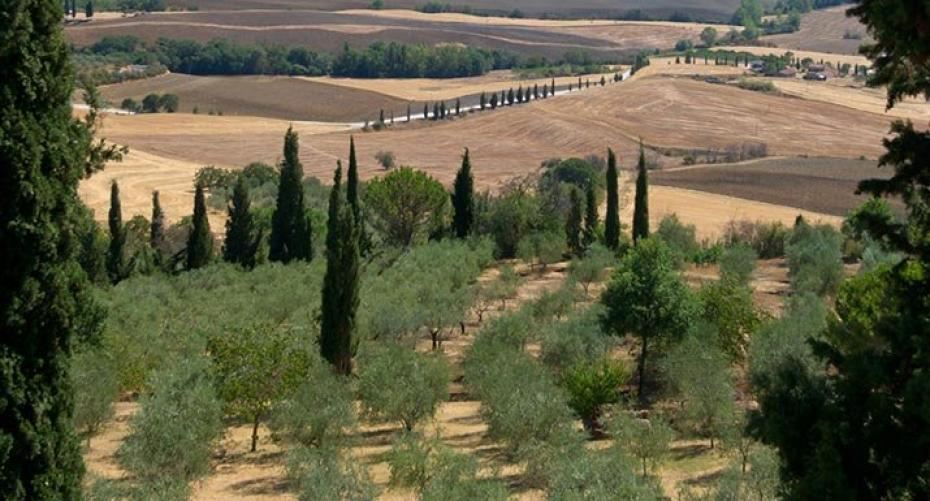 Olive trees (Olea europaea) are small evergreen trees which are now in widespread cultivation, being extremely important, economically, in many Mediterranean countries. It is one of the worlds most economically important crops, with 95% of the world’s production being concentrated around the Mediterranean. In 2011 there were about 9.6 million hectares under cultivation. The wealth of the Minoan civilisation, about 3,500 years ago, is thought to have been built on the back of olive oil. Originally it was widespread in the Mediterranean region, Africa, the Canary Islands, Reunion, Mauritius, China and southern Asia. In the wild it can reach a height of 15m (49’) and attain a considerable girth, with the trunk becoming twisted and gnarled and particularly sculptural.

It prefers to grow on well drained limestone soils, but is happy for a number of years in a large container, given the right conditions. There are trees which are scientifically proved to be over 2,000 years old, but it is thought to have been in cultivation for at least 5 – 6,000 years. It has been held sacred for centuries, being a symbol for peace, glory and abundance. An olive branch was found in the tomb of Tutankhamun.

Most of the olives produced, 90%, go for oil, with the remaining 10% being used as table olives. They can be picked at three stages: green, when they are picked at full size but before they have started to ripen; semi-ripe, picked when they are just starting to ripen and ripe or black, picked when they are fully mature. In their raw state they are quite bitter and must be put through a process of curing and fermentation to make them palatable.

If you are to leave them outside all year round they need a warm, south or west facing sheltered urban garden or a mild area which gets little or no frost. Planted in the ground it can reach a height and spread of 10m (30’). Most of us have to grow them in a container, especially here in the Lake District. Place them somewhere sunny and sheltered in the summer, then bring them under cover in winter to a frost-free environment, an unheated greenhouse, conservatory or lean-to. It does not have to be completely frost free if the tree is quite mature as it can withstand temperatures down to -10C (14F).

Choose a container which is in proportion to the size of the tree. Remember that you will have to move it inside in winter. If you have a pot which is too big for the plant there is a danger that it will sit in too much wet compost over winter. Place a good layer of crocks, 5cm (2”) at least, in the bottom of the container. Raise the pot off the ground with pot feet, stones or a couple of bricks so that the water can get clean away from the pot, this ensures that the drainage holes don’t become blocked up with silt. Plant to the same depth as it is in the pot; into a mixture of 4 parts loam-based John Innes No 3 and 1 part horticultural grit. It needs well-drained compost as sitting in soggy wet compost in winter can be fatal.

Make sure it is kept damp during the growing season and feed fortnightly with a balanced liquid fertiliser. It can cope with occasional dry spells but it could lead to it shedding leaves. It will naturally shed some of the older leaves in spring when the new seasons growth begins. In winter reduce the watering to keep the compost just and so damp.

It is naturally slow growing so does not need much pruning. Keep the inside of the tree fairly clear to ensure a good airflow, which discourages fungal infections. Take out any dead or diseased branches. When the plant has reached 150 – 180cm (5 – 6’) pinch out the growing tips to encourage the tree to become bushier. If the plant is a particular shape, such as lollipop, keep it trimmed to maintain the shape. If you are going to make a standard out of a bush choose one which has a strong lead stem; as the plant grows take off any side branches. Once you have the desired height start to shape the head by trimming back. Pruning too hard will produce a lot of sappy growth which won’t bear fruit.

Olives are self-fertile but you can increase productivity if you have two trees. It needs two months of cold temperatures in winter below 10C (50F,) to initiate flower production; it also needs a fluctuation between day and night temperatures, so keep it somewhere unheated at night. If it is kept indoors with a fairly constant temperature it is unlikely to fruit. A prolonged cold spell of below 7.5C (45F) will also reduce the likelihood of fruit production, as will keeping it too dry between February and May.

Propagation is by taking semi-ripe cuttings in summer. Most varieties are grafted as these produce more fruit than trees produced by cuttings or seed.

Leaf drop, dieback and bark splitting are caused by too long a cold spell, even mature plants can be damaged if the temperature drops below -10C (50F).

Verticillium wilt and Phytopthora are caused by the roots becoming water-logged, so make sure the compost is well draining and don’t overwater.

Scale insects are small disc shaped flat insects which suck the sap and can seriously debilitate the plant. They exude sticky honeydew which attracts a black sooty mould which can be the first sign that you have an infestation. They are not easy to get rid of; if there is a lot of sooty fungus you may have to deal with this first before you can get rid of the insects. The fungus can be removed with soapy water then sprayed with a fungicide to stop it spreading. The insects can be scraped off by hand if there are only a few, otherwise you may have to spray several times with a systemic insecticide. There are parasitic wasps if you want to use a biological control but it needs to be carried out in a controlled area, such as a greenhouse.

Olive scab is a fungal infection which produces dark brown/purple spots with a green centre, on the leaves. It leads to the leaves yellowing and dropping and eventually to branches dying back. Prune back infected branches, collect fallen leaves and either burn them or dispose of in the grey bin; don’t put them on the compost heap as this only spreads the infection. Spraying with Fungus Fighter will protect against the fungus, especially if the weather is wet in spring and summer, you will probably need a couple of applications. When you water just apply to the compost and not over the leaves as this spreads any spores.