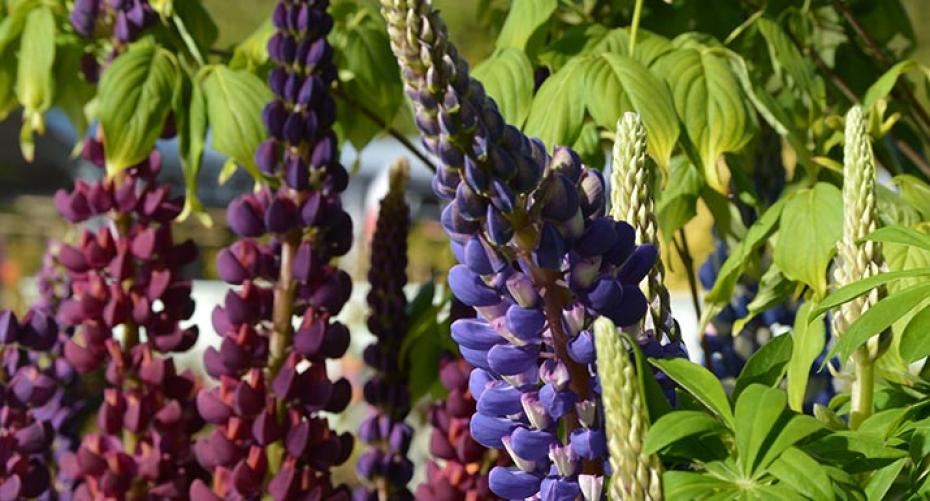 How To Grow Lupins

Lupins are one of the quintessential cottage garden plants adding height and majesty to any border. They are hardy, easy to grow and come in a huge range of colours. They are native to North and South America, North Africa and the Mediterranean. The beans have been used as a food source in the high Andes for at least 6,000 years; however they are toxic if they are not properly prepared. In the late 18th century they were introduced into northern Europe. Most of the modern day hybrids are the result of a breeding programme in the 1930’s, 40’s and 50’s by Alfred Russell. They are a member of the pea family, with around 200 species, and as such can fix nitrogen in the soil. They are grown for animal feed as a substitute for soybean, being high in protein and containing less fat than the soybean. Over 85% of lupins for animal fodder are grown in poor soils in western Australia. They are an important nectar source for the bees.

They ideally need well-drained poor soil in full sun; they will tolerate a little shade but if planted under trees they tend to grow soft and leggy with very few flowers. They won’t tolerate chalky soils or heavy wet soils as they will rot in winter.

Plant at the same depth as it is in the pot; plant too deep and the crown will rot. There is no need to feed as they are tolerant of poor soils. Don’t feed with farmyard manure as this will also lead to the crown rotting. They are fairly short-lived plants, only living for 7 – 8 years, but you can easily take cuttings to ensure a continuation of colour. Protect from slugs as soon as you plant them.

Water well when you first plant them, then leave them to spread their roots and find their own water; unless of course there is a prolonged hot, dry spell after planting, in which case you will need to water. They don’t need feeding as they perform better under poor conditions. Deadhead regularly during summer and they will flower from the beginning of summer to well into autumn.

Growing in pots and containers

They will grow very well in a large container. Put a piece of broken crock over the drainage hole to prevent silt blocking the hole. Fill with good quality loam-based compost mixed with a little horticultural grit to improve the drainage. Plant at the same depth as it is in the pot and water after planting. You will need to keep an eye on the watering and keep it just damp. Once the plant has grown, at the beginning of summer feed with a little high potash fertiliser, such as Tomorite, this should ensure that it keeps flowering all summer.

Sow seeds as soon as they are ripe into good quality loam-based seed compost. Place in a cold frame or unheated greenhouse. Unfortunately they don’t come true from seed so is just pot-luck as to what colours you will get. Prick out into 9cm (3”) pots when they have formed 4 true leaves. Use a 50/50 mixture of loam-based compost and sharp sand.

If you want an exact copy of the parent plant you will have to either divide the plant in spring, not autumn as this will kill it, or take basal cuttings in spring. Place the cuttings into a 50/50 mixture of loam-based compost and sharp sand. Place in a cold frame or unheated greenhouse.

If you don’t regularly deadhead they will set seed around the parent plant and it will look as if the original plant has changed colour.

Aphids can cause stunted growth and leaves to become distorted. Control is either by spraying with a systemic insecticide or soapy water. If you feed the birds, and encourage blue-tits in particular, they will eventually start to eat the aphids.

Slugs are a big problem as they see lupins as a Michelin starred restaurant, so make sure you protect at all times.

Lupin anthracnose is a fungal infection most prevalent in a warm wet spring and summer. It is characterised by brown patches with orange spores on the stems and leaves. The leaf stalks tend to grow in a spiral manner resembling a corkscrew. If the infestation is only light cut out and destroy the infected tissue; don’t compost, either burn it or put it in the grey bin. If the infestation is heavy the plant will have to be dug up and destroyed; also remove any leaf debris from the soil surface. Try and avoid the infection by making sure there is adequate air-flow around the plant and don’t water from overhead as this spreads the spores. Don’t save seed from a plant which has been infected and if it returns for a second year don’t grow lupins.

This is an evergreen shrub with fragrant yellow flowers eventually reaching a height and spread of 150cm (5’). It can occasionally reach a height of 3m (10'). It needs a sheltered position facing either west or south in full sun or partial shade. The soil must be well drained with a pH in the acid to neutral range.