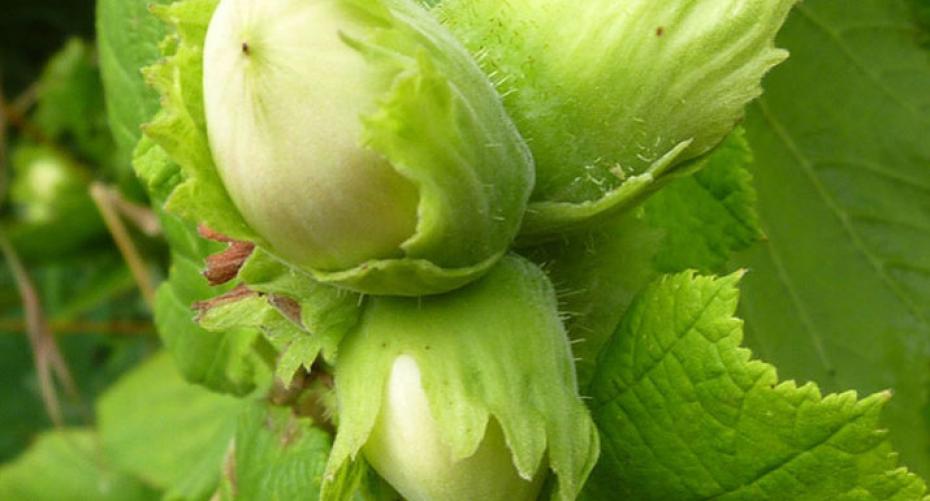 How To Grow Hazelnuts

Hazelnuts (Corylus avellana; C. maxima), sometimes called cobnuts or filberts, are a really useful shrub/small tree for both wildlife and for cooking. The cobnuts are short, fairly round and have a short husk from which the nut protrudes but the filbert is long and has a husk which completely covers the nut. There are several species of these nuts, most of which produce a crop, but there are a couple of purely decorative varieties; Corylus avellana ‘Contorta’, which is fantastic for using as a Christmas decoration (and incredibly expensive in the shops) and Corylus maxima ‘Purpurea’ which has large dark purple leaves.

The varieties which produce a crop are invaluable as a food crop for wildlife if you can incorporate them as part of a wildlife hedge. Unfortunately if you want to grow them purely for their yield you may find that a proportion fall victim to the squirrel thieves! Deer can also be a problem as they love to strip the bark.

Corylus produce yellow catkins in late winter and early spring so are a great source of nectar for early flying bees. They have been used in the UK for at least 7,000 years and even today are an important food crop; being used for cooking oil, as an essential ingredient in praline, sweets and desserts and who doesn’t love Nutella (watch our video showing how to cook waffles with Nutella and blueberries on the BBQ). Historically they have been coppiced to provide not only a food crop but also hazel rods for wattle fences, which have been used for corralling stock and as boundaries since Neolithic times, and also as the ‘wattle’ in wattle and daub houses.

Kent is the largest producer in the UK with their cobnuts mainly being sold fresh, Turkey is the largest worldwide producer. They are a really healthy foodstuff, but to obtain the maximum health benefits they must be eaten in their raw state. Research appears to suggest that they may be instrumental in preventing certain cancers and in lowering cholesterol. Their high magnesium levels help increase muscle strength and prevent cramps and muscle spasms. They are also rich in vitamins E and K, manganese which helps strengthen bones and guard against osteoporosis, calcium, zinc, potassium, monounsaturated fat and other essential nutrients.

They need a well-drained, fairly poor soil as planting in rich soil produces a lot of leafy growth but not many nuts. It is hardy so can be planted anywhere in the UK but does require plenty of sunshine and neutral soil. They are ideal planted as part of a wildlife hedge or a mixed woodland scheme.

Plant them about 4m (15’) apart if planting up a nuttery, to provide a crop, or as part of a woodland. If planting whips in a hedge plant about 45cm (18”) apart. Bare rooted plants can be planted from late autumn to early spring but larger specimens bought in pots can be planted at any time of the year. The bare root plants usually come as bundles of whips which are small single stemmed plants. They are self-fertile and wind pollinated but you will get a better crop if you plant more than one. Spread out the roots and dig a hole large enough to accommodate them, plant to the same depth as they are in the pot or if planting whips bury about 5cm (2”) of stem. Water in if the soil is dry.

Make sure they are kept weed free for 2 – 3 years after planting to ensure they have every advantage to produce a good root system. If planting whips cut off the lead shoot when they are about 60cm (2’) then they will start to produce side shoots. Give them a feed of a balanced fertiliser, such as Growmore, in late autumn and mulch with well-rotted farmyard manure, keeping it away from the stem.

They are prone to producing suckers so keep cutting them off otherwise you will be left with an impenetrable thicket. Prune out the old stems down to ground level in winter, leave the new growth. Keep the centre open and airy and try to keep the outside stems in a nice round goblet shape. If the plant has become congested you can rejuvenate it by being ruthless and cutting it back to a few centimetres above ground level. Once the plant has attained a reasonable size and is well established snap the new long side-shoots in early summer but leave them attached to the stem; this encourages the plant to produce more nuts. In winter cut these broken branches back to about 4 – 5 buds. If you don’t prune the shrubs they will eventually reach a height of 6m (20’) with the nuts all inaccessible at the top.

If you have the space to plant a few trees then coppicing them could provide a steady supply of poles to use for weaving hurdle fencing, beanpoles or hedge laying spars or simply as a small source of income; after all there is always something to spend money on when you have a garden! Cut the poles every 6 – 10 years, about 10 – 15cm (4 – 6”) from the base, in winter when the tree is dormant. Coppicing opens up the tree canopy which enables a plethora of ground flora to flourish; it also creates an ideal habitat for forest clearing specialist butterflies such as the Pearl Bordered Fritillary. Unfortunately the new shoots of the coppiced trees are the equivalent of a Michelin starred restaurant for deer and rabbits so you will have to either fence off the trees or undertake some form of control.

You can either pick off the nuts when they are green to eat straight away or leave until they mature and drop off the tree, squirrels permitting! To dry them lay out in a single layer in a warm spot indoors, away from any mice, keep turning them and in about 3 weeks they should be dry. You can roast them out of the shells in the oven pre-heated to 140C, 275F, Gas 1 for 20 minutes.

They are relatively disease free but if you see small holes in them when harvesting it could be down to weevils; prevent it the following year by investing in a few chickens who will eat the bugs from May to July when they emerge. Other problems include squirrels and jays, so if you don’t want to share consider growing them in a fruit cage. Deer and rabbits can also be a problem (see Aftercare).