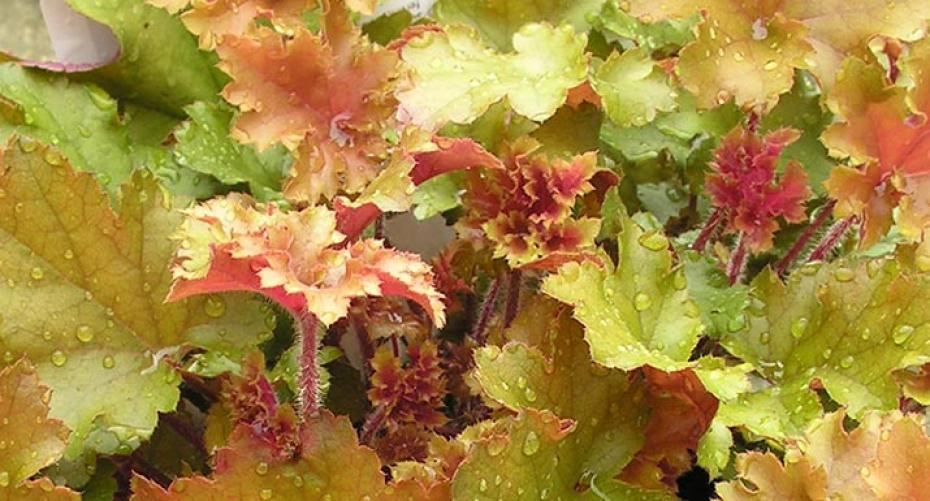 How To Grow Handsome Heucheras

If you are on the lookout for a compact plant that will give you year round interest through its flowers & foliage, look no further than the Heuchera - be warned, because once you have grown a few of different varieties there is a distinct probability that you will want to grow more!

Their pleasantly lobed, often evergreen foliage, ruffles, frills or flounces in a selection of colours including bright green, autumnal oranges, reds & the darkest chocolates & blacks. There are also varieties which have deeply contrasting leaf veins which give a marbled effect or ones with incredibly shiny foliage which looks like a metallic sheen on the deep coloured leaves. If you have been wowed by their foliage they will continue to impress with delicate spires of flowers in summer which sway above the foliage in shades from creamy white to bright red.

Heucheras (sometimes called Coral Bells) are members of the Saxifrage family & are hardy & easy to grow, preferring sun or part shade in moist but well drained neutral soil. Their final size depends on the variety but they range from approximately 20cm to 50cm height & spread. As they are shallow rooted plants the rootstock often lifts with winter freezing & thawing so to compensate for this it is worthwhile mulching or lifting & replanting deeper, not right up to the crown or it will rot. As they get older they also tend to lose leaves from lower down the stem & become quite woody often suffering from broken stems in high winds. When the plant starts to look messy or there is reduced flowering they can be propagated by splitting them into sections & replanting. If you want to propagate from seed it is unlikely that the new plants will look the same as the parent unless it was a species plant not a cultivar. Collect the seeds on a dry day then they will need to be stored in a fridge for about 6 weeks (stratifying) before being sown on the surface of a seed & cutting compost & watered. Plant the seedlings up in pots & grow on before hardening off & planting out after the risk of frost.

Heucheras suffer from very few pests & diseases in the garden, the main one being powdery mildew, so give them some room to create good air circulation. They also make great companions for container plantings but in these situations they are often prey to vine weevil. Dose with Provado in spring & autumn or if you prefer to be organic you can use nematodes or watch out for your plant looking unhealthy & remove it from the container to check the root system for grubs. The good news is that when you have removed all grubs from around the roots or base of the plant it will often recover if replanted in a pot of fresh compost & given some TLC. The bad news is that you will have to do the same with all the plants in the container just to be sure.

Whilst you are searching for the right plant for your garden you may also come across Heucherellas. These are a cross between a Heuchera & a Tiarella, taking the foliage colours from the former & the leaf shapes & foamy flowers from the latter. They grow in similar conditions to Heucheras enjoying moist but well drained soil in part shade unless bred from a sun-loving Heuchera.

We have a lovely selection of Heucheras in the garden centre this September in a variety of colours to suit your planting plans. Remember to check whether they prefer full sun or partial shade before you buy.

Heuchera ‘Frosted Violet’ has serrated leaves in a deep silvery violet. It is a strong growing plant that reaches approximately 45cm & flowers in summer with long spires of tiny white flowers that are pink in bud.

Heuchera ‘Lime Marmalade’ is a marvellous contrast to its parent Marmalade & will light up any display. It is a vigorous plant which grows to about 30cm & has more tolerance to sun than a lot of the lime green varieties.

Heuchera ‘Marmalade’ really does stand out with its shiny orange leaves which crinkle nicely around the edges & have a shocking pink underside for contrast. It stands up well to inclement weather & prefers partial shade.

Heuchera ‘Obsidian’ has smooth rounded leaves of deep maroon to almost black with a glossy sheen. It grows to approximately 45cm & has ivory flowers in summer.

Heuchera ‘Siver Scrolls’ is a very pretty variety with delicate silver foliage that is flushed with burgundy on young leaves with older leaves turning to a deeper slate grey with dark veins. It produces flower spikes with soft pink buds in early summer which open into creamy white flowers. It grows to approximately 35cm & is happy in sun/part shade.

There are a huge range of possible planting combinations to spice up your garden or containers this autumn using Heucheras. The darker forms look great combined with oranges, yellows & lime greens & the orange & green forms look great with dark foliage, purples & reds. Choose from the wide colour range of winter flowering pansies & patio chrysanthemums that are on offer & mix with small evergreen shrubs for added height. For something a bit more adventurous try mixing them with cordylines, sedums or grasses with dwarf Michaelmas daisies or Rudbeckia. In the garden they will happily grow alongside other plants which enjoy the same sort of growing conditions such as astilbe, hostas, ferns, carex & ajuga. Alternatively plant them in the shade of taller specimens such as phlox, Cotinus coggygria or Japanese Maples as long as they get sufficient moisture.

Of course, when you have seen the varied choice of foliage colours & leaf designs you might just decide to combine your favourite ones in a tiered container display for the patio or a single species planting in a corner of the garden. You won’t be disappointed!