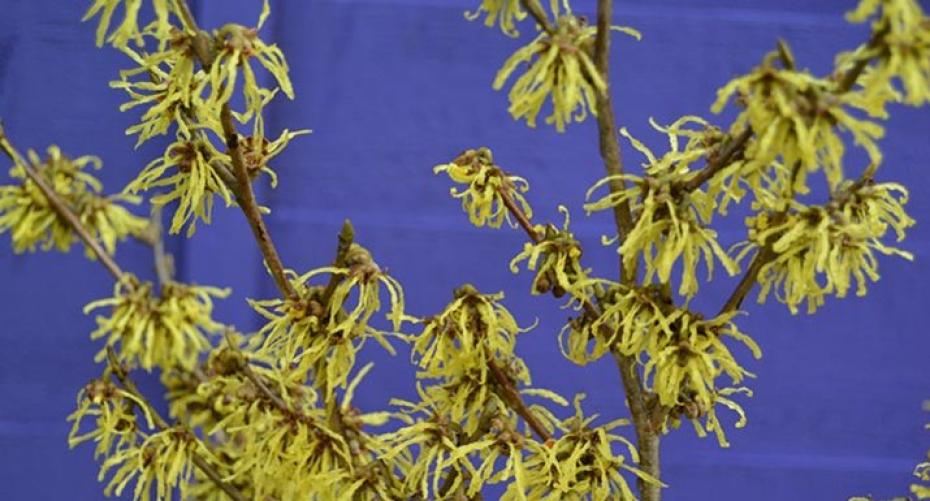 How To Grow Hamamelis (Witch Hazel)

Grow Hamamelis for colour and scent in the winter garden

Hamamelis is a captivating shrub which flowers in winter and early spring when there is little else. Colours range from deep red to pale lemon. The flowers have narrow petals and are spidery in appearance. They can sometimes be fragrant. It is an easy shrub to care for requiring little, if any, maintenance. The flowers are frost resistant; however a very young plant may need some protection from very harsh frosts in the first couple of years until it becomes established. It is quite a large shrub with some specimens eventually reaching a height and spread of 5m (16’). The twigs were commonly used as divining rods. The leaves and bark are used to produce an astringent, which is used in the treatment of bruises, swelling, insect bites and as a component of aftershave. It is also a valuable food plant of the moth Colotois pennaria (Feathered Thorn).

It needs a sunny or semi shaded, reasonably sheltered site out of the strong winds.

It requires a free-draining yet moisture retentive neutral to acid soil; if the pH is too alkaline it will become yellow in appearance. It won’t do any good in a chalky soil, so will have to be grown in a container. If your soil is clay incorporate some organic matter and horticultural grit to improve the drainage. Similarly if you have a free-draining sandy soil, again, incorporate some organic matter to hold onto the moisture.

Make sure it is well watered in dry periods, even in winter, as if it dries out it will drop its flowers. A mulch in late winter or early spring will retain the moisture. Before you mulch apply a dressing of a balanced fertiliser such as Growmore or blood, fish and bone. Remove any suckers from the base in autumn; these will emerge from the soil-line or just below. Cut them off; if you don’t the plant will eventually revert back to the rootstock which will be completely different from the plant you bought. It needs little or no pruning, but if you have to, cut out last season’s growth just after it has flowered. They can be fan-trained if you buy a young supple plant. Just tie in some canes, in a fan shape, to horizontal wires along the wall and tie the strongest branches to the canes, cutting out any weak or superfluous growth.

Growing in a container

Start with a container just slightly larger than the pot it comes in; gradually increasing the container size as the plant grows, eventually ending up in a large pot, about 45cm (18”) across. Put a good layer, 5cm (2”), of crocks in the bottom and stand the pot on pot feet to minimise the risk of it standing in water and freezing in winter. Use John Innes Ericaceous compost. As it is in a container it is more susceptible to drying out, so make sure it is kept well watered.