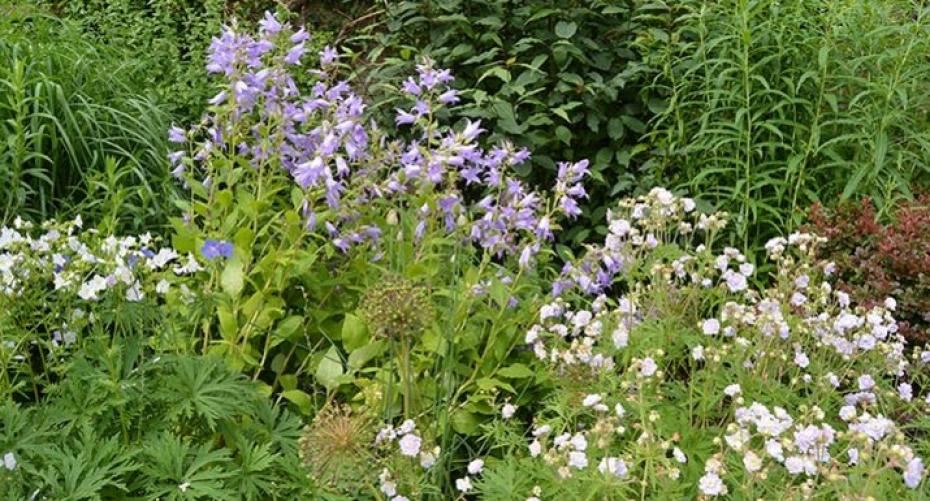 How To Grow A Garden Full Of Carefree Campanulas

Think of a quintessential English herbaceous border and Campanulas will be there somewhere, either tall and stately at the back, adding height, or low and creeping over the edge. They are a genus of around 300 species plus several sub-species which come in white, blue, pink or purple. They originated in the temperate and sub-tropical regions of the northern hemisphere. The height ranges from the dwarf Arctic and alpine varieties at only 5cm (2”) to the tall species from temperate grassland and woodland, which can reach 180cm (6’).

Their flower resembles a bell, which is how they got their name, from the Latin for ‘little bell’. One of the most common species is the wild Campanula rotundifolia, called the Harebell in England and the Bluebell in Scotland and Ireland. They are an important food plant, especially the Harebell, for the larvae of several moths including Common Pug (Eupithecia vulgate), Mouse Moth (Amphipya tragopoginis) and the Ingrailed Clay (Diarsia mendica), to name just a few.

The large herbaceous species like fertile, moist, well-draining soil in full sun or light shade with most of them performing better in a climate which has cool nights. The small alpine varieties need a very well-draining situation and are even happy growing between paving slabs or in gaps in the wall. These small varieties may become a little invasive and can swamp smaller slow-growing plants. Most of the varieties offered for sale in the UK are hardy down to -20C (-4F), provided they are not planted in a soil which water-logs in winter.

Sow the seed thinly on the top of good quality peat-free seed compost, don’t cover as they need the light to germinate. Place in a propagator or on a warm, sunny windowsill at a temperature of 24C (75F) and they should germinate in 10 – 14 days. When the seedlings are large enough to handle prick them out into 9cm (3”) pots, using good quality peat-free potting-on compost. Place outside in a cool frost free spot until they are large enough to be planted up into the border.

Plant at the same depth as they are in the pot. Add a little garden compost and a sprinkle of blood, fish and bone to the hole before planting and fork in so the roots are not in direct contact with the fertiliser. Water well after planting and make sure it is kept watered in the first summer, especially if there are periods without rain.

When they are growing feed with a balanced fertiliser every fortnight. They need to be kept evenly moist so make sure they are watered in dry periods. It is essential to deadhead them if you want a continuous supply of flowers. The tall herbaceous species will need staking as they are easily battered down in a wind or heavy rain. Cut back the lactifolia species by a half to a third after they have finished flowering and they will often reward you with a second flush in late summer and early autumn.

They are pretty tough and disease resistant but can be marred by aphids and slugs so you will need to be vigilant and act as soon as they are spotted.