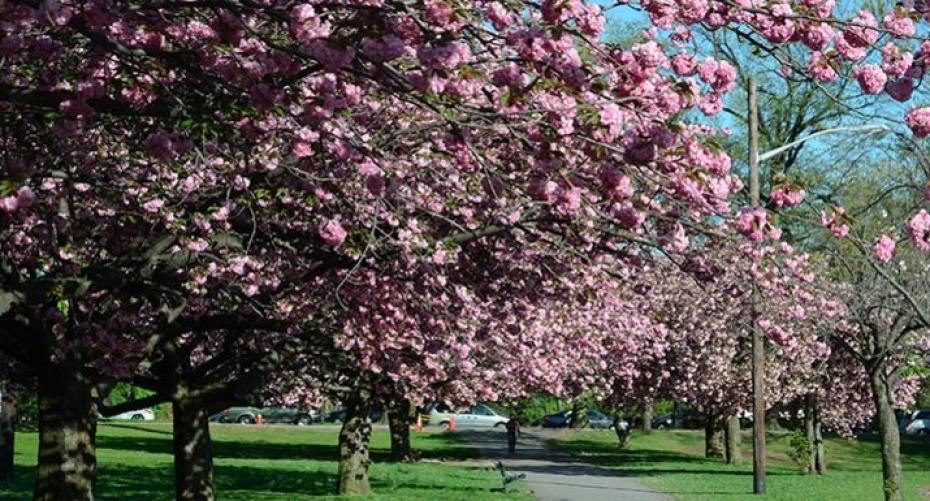 How To Grow Flowering Cherries

Flowering cherries belong to the genus Prunus of which there are approximately 430 species plus countless hybrids. There are well over 200 cultivars in Japan. All the flowering cherries are deciduous. The species include: apricots, peaches, plums and almonds. The edible cherries produce a nutritious fruit beloved by mammals and birds, but the flowering cherries tend not to produce much fruit; they are usually grown for the flowers and autumn colour, and occasionally the bark. The autumn colour ranges from yellow through to fiery red. The flowers attract pollinating insects so they are a good addition to any vegetable and fruit garden. The flowers, either single or double, come in white and myriad shades of pink, from the softest blush pink to the darkest rose. Wild species in the UK include: Wild Cherry, Prunus avium, Blackthorn (sloe), Prunus spinosa and the Bullace, Prunus domestica subsp. insititia.

They play a major role in Japanese society with the cherry blossom being widely celebrated. These festivals or “hanami” are commonly celebrated with picnics under the trees while viewing the cherry blossom. They start in late March and last until early May. Blossoming begins in Okinawa in January and moves through the country, reaching Kyoto and Tokyo at the end of March and beginning of April; and then moves to higher altitudes, arriving at Hokkaido a few weeks later. At the World Heritage Site of Mount Yoshino it is possible to see 1,000 trees all blooming at the same time. The “hanami” are thought to have started as far back as the 3rd century and were originally only for the elite of the Imperial Court. Cherry blossom symbolises mortality and is widely represented in Japanese art, films, music and consumer goods.

In the UK one of the country’s largest collections of flowering cherries, over 150 varieties, can be seen at Keele University in Staffordshire. Batsford Arboretum at Moreton-in-the-Marsh in Gloucestershire holds the national collection of over 125 varieties. Flowering cherries are usually grown for their flowers but most of them also have spectacular autumn colouring. Prunus serrula, Tibetan Cherry, is grown for its shiny, coppery mahogany bark which peels with age. This is a medium sized tree reaching a height of approximately 8m (26’) after 50 years. The flowers are small, white and fairly insignificant, blooming in April/May. The foliage turns red and yellow in autumn.

If weather conditions are right you can have cherries flowering almost continuously from November onwards; starting with Prunus x subhirtella ‘Autumnalis’, which has semi-double blush white flowers. This is a medium sized tree reaching approximately 4m (13’) after 20 years. After the flowers it can have small cherries which the birds love; it also has good autumn colour so it certainly earns its place in the garden.

Prunus mume ‘Beni-Chidore’ is one of the best Japanese apricots for a small garden, reaching an approximate height of 2.5m (8’); producing deep rose madder flowers in February. They are sometimes available as a small grafted standard reaching a height of 1m (3’6”) plus the foliage.

Prunus ‘Amanagawa’ is an upright, columnar tree suitable for a small garden where width is restricted. It flowers in April/May with fragrant, semi-double, shell pink blooms. If you are sold a tree which is tied up and are told that it needs to be left like that to train, it is not an upright tree. They do not need training.

Other notable varieties are: Prunus ‘Blushing Bride’ (Oku Miyako); this is ideal for a small garden reaching an approximate height of 3m (10’) after 20 years. It has double white flowers and the leaves in autumn turn orange then red.

Prunus incisa ‘Kojo-no-mai’ is an ideal plant for a container as it grows very slowly; the ultimate height and spread if grown in open ground is approximately 8 x 8m (26 x 26’). It has attractive zig-zag branches, small blush pink flowers and good foliage colour in the autumn.

Prunus ‘Kanzan’ has deep pink, double flowers and lovely bronze foliage but unfortunately is not suitable for a small garden as it can reach a height of 12m (40’) and a spread of 8m (26’) after 50 years.

Flowering cherries are fairly easy to grow if given the right conditions. They are usually disease free and require very little pruning. They will tolerate almost any soil conditions but prefer a well-drained chalk or limey soil; they don’t thrive in wet clay soil. They need an open sunny position, as they don’t flower too well in a shaded position. The only pruning required is if there are any dead or diseased branches. Any pruning is best carried out in late summer so that the wound has time to heal before winter. If the plant is a small standard, any growth below the grafting point must be removed. If the tree is grafted make sure it is not onto a wild cherry rootstock as this will produce a large tree; buying from a reputable nursery should solve this problem.