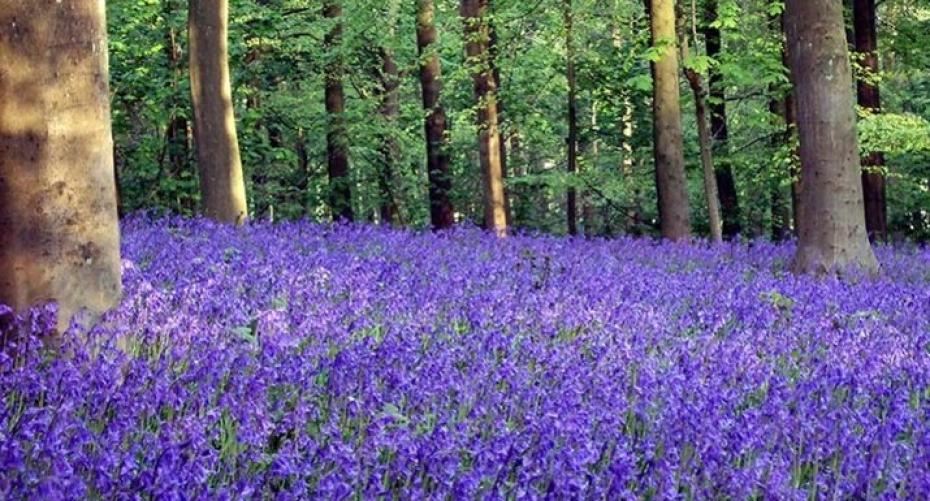 How To Grow English Bluebells

English bluebells, Hyacinthoides non-scripta, bedeck our ancient woodlands with an ocean of deep violet blue in late spring. Occasionally genetic mutations produce a white variety. Spanish bluebells are pale to mid-blue, pink and white. They are a perennial bulb originating in Europe, from north-west Spain to the British Isles; where it is thought over half the world’s population of bluebells can be found. They are often an indicator of ancient woodland from the 17th century.

They are most commonly found in deciduous woodland, flowering before the canopy closes over in April or May; and occur most commonly on slightly acidic, moist soils. They are protected in the UK under the 1981 Wildlife and Countryside Act which makes it an offence to dig up the bulbs. They are an early source of nectar for their main pollinator, the bumblebee. The bulbs are poisonous if eaten. In the Elizabethan era starch from them was used to stiffen the ruffs on collars and cuffs. They also produce glue which was used in book binding and to attach the feather flights to arrows. The ‘Bluebell Railway’ in East Sussex, near Wakehurst, is a steam train which, if timed right, runs through scenic bluebell woods.

They are presently under threat from a number of sources; loss of habitat through the destruction and neglect of woodlands, interbreeding with Spanish bluebells and illegal trade. It is also thought that climate change could pose a further threat as they start growing when the temperature is cold so giving them an advantage over warmer growing species. If springs become warmer they will all start to grow at the same time, so the bluebells could lose out to stronger growing competitors.

Please use reputable nurseries to source your plants. They are available either growing in pots or ‘in the green’; which means they have been dug up after flowering and are dispatched straight away. Dry bulbs are available in the autumn but the success rate is not as high as with fresh plants. They may take a couple of years to flower while they establish a root system. Plant them fairly deep, at least 10cm (4”), in a hole enriched with well-rotted leaf mould. They like a damp position in dappled sunlight; if they are too dark they won’t flower very well.
They look most spectacular planted en masse and left to naturalise, but can also work well planted with tulips and hyacinths.