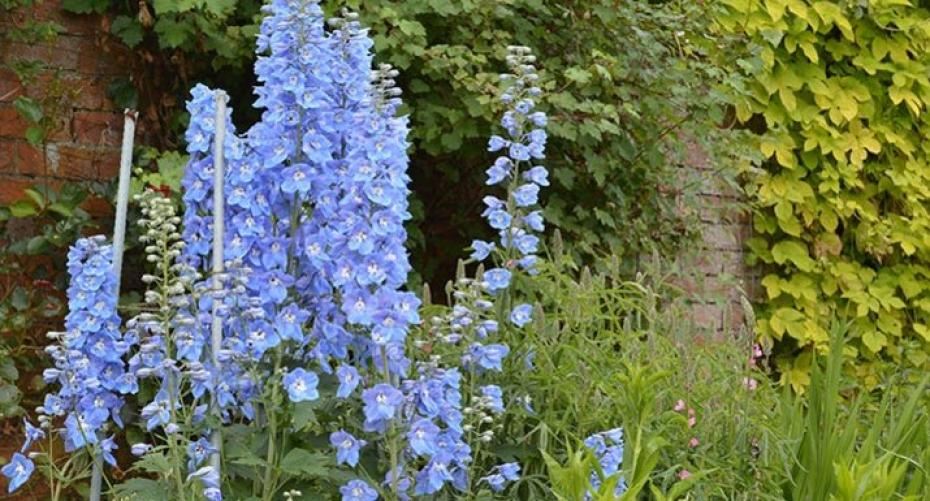 How To Grow Debonair Delphiniums

Delphiniums are the showstoppers of the herbaceous borders

What can be more attractive in the herbaceous border than the tall, majestic spikes of delphiniums, in eye-catching colours of blue, purple, pink, white and salmon. The species include perennials and annuals and are fully to half-hardy. They are a cottage garden favourite, fairly quick to grow and give a good show over a long period. There are about 250 – 300 species, most of which originate from the northern hemisphere, although there are some which are from the high mountains of tropical Africa. All parts of them are toxic so make sure children and animals don’t have access, grow them at the back of the border behind other plants. They vary in height from 10cm (4”) to over 2m (7’).

Sow seeds from the end of January to the beginning of April. Sow in a good seed compost and cover with a piece of black plastic. Keep at a temperature of 16C (60F), a heated propagator would be ideal. Germination should take 10 – 14 days. Prick out into John Innes No 2 compost in 9cm (3.5”) pots. Harden off by taking outside during the day, gradually increasing the amount of time left outside. Plant out in their permanent positions in May.

They like rich, moisture retentive but free draining soil in a sunny position. If you have heavy clay soil, incorporate some horticultural grit to aid drainage. Incorporate a good amount of organic matter in the form of peat-free compost or well-rotted farm manure before planting. Established plants will benefit from a dressing of blood, fish and bone in spring, water well and mulch with chipped bark, keeping it away from the stems otherwise it may encourage fungal infections. Make sure they are well watered in any dry periods. Cut the first spikes back as soon as they have finished, they will then produce a second flush in late summer. Feed with a high potash feed, such as Tomorite, and water well after removing the first spikes. In spring remove any thin growth leaving 5 – 7 strong shoots.

They need staking in early spring when the growth is young. Support each individual flower if they are the tall growing varieties, making sure they are tied in loosely to enable some movement, otherwise if tied too tightly they will snap in a wind. The smaller more compact varieties can be staked as a clump with: twiggy branches, either Hazel or Silver Birch; cages or linked supports.

White rot; this is a fungus which shows as a white, downy patch on the leaves. Remove and destroy the plant and disinfect the soil as it can live up to 4 years in the soil. Don’t plant any susceptible plants in the plot. You can take preventative measures by dusting the roots with sulphur before planting and not feeding with a high nitrogen feed, which encourages soft growth.
Powdery mildew; spray with a fungicide in early summer as a preventative measure.
Black and crown rot; the centre of the plant goes black and rotten, which leads to the death of the plant.
Stem rot; a grey mould at the base of the stem, cut out any stems and dust with sulphur.
Sooty mould; this is a fungi which grows on the honey dew exuded from sap sucking insects, such as green and white fly. It is prevented by getting rid of the aphids, either by spraying chemicals or organic compounds or by encouraging the birds which will eat the aphids.

Most of the fungal infections can be prevented by: ensuring a good air flow around the plant; cutting out any weak growth; not feeding with a high nitrogen fertiliser which only encourages soft, weak growth; not letting the plant become stressed through lack of water; not putting mulch against the stem.

Slugs and snails are a real nuisance as they look upon delphiniums as a 5* restaurant. They do most damage when the new shoots are coming through in spring. A circle of grit around the plant should deter them; otherwise use any slug control method you prefer.