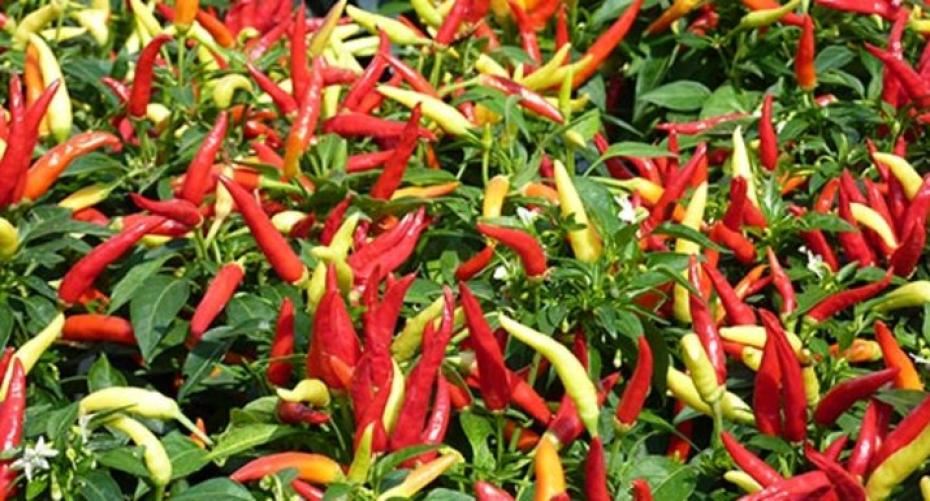 How To Grow Cracking Chillies

Chillies are easy to grow, nutritious and can be dried, pickled or frozen

Chillies are one of nature’s wonder foods with new health benefits being discovered every day. They were first brought to Europe c1493 after Christopher Columbus visited the West Indies, and are now one of the most common vegetables used throughout the world.  They are relatively easy to grow and there is a huge variety available in most garden centres either as seeds or small plants in spring. You don’t need any fancy equipment; a sunny kitchen windowsill will suffice.

They can help fight winter colds and by releasing endorphins there is also evidence that they can help fight depression. They have high levels of vitamin C, more than oranges, more vitamin A than carrots and high levels of vitamin D which is normally obtained from sunshine, which can sometimes be lacking here in the Lake District. Currently there is on-going research into chilli’s effects of lowering the amount of insulin needed by the body to reduce blood sugar levels. Present experiments on rats are finding that chilli can kill up to 80% of cancer cells associated with prostate cancer. It is thought that the natural antioxidants contained in chilli can help prevent cancer, with cultures regularly consuming chilli having lower than average occurrences of cancer.

They are one of the oldest recorded condiments, being eaten in South America as long ago as 7,000BC, where they were also used as a means of paying taxes to the Aztec emperors.
If squirrels are a problem on your bird table just add some dried chillies to the bird feed; birds are not sensitive to the effects whereas squirrels have the same response as other mammals.
Farmers plagued by elephants raiding their crops use a range of chilli based methods to protect the crops. These methods range from planting chillies amongst the crop to preparations either burned or smeared on fences. This is not a problem in the UK, fortunately!
India is the world’s largest producer.

The heat intensity of chillies is measured using Scoville units, named after Wilbur Scoville, an American pharmacist.
There are about 400 varieties in cultivation around the world, ranging from the bell peppers with no heat to the hottest variety being Carolina Reaper weighing in at a massive 2.2million Scoville units. The Jalapeno pepper by comparison measures from 2,500 to 8,000.

How to grow chillies

They need a long growing period so need to be sown as soon as possible from January. Sow in a seed tray in a loam based seed compost about 5mm deep. Stand tray in water for approximately half an hour then lift out; place on a warm sunny windowsill or in propagator with slight bottom heat. They must be in as light a place as possible otherwise the seedlings will grow too weak and gangly, and the aim is to produce sturdy seedlings.

Prick out when two leaves have grown; lift out gently by the two leaves and by levering out with a plant label. Pot on into individual cells using a loam based potting compost. Peat based compost is not suitable as chillies like good drainage and peat retains too much moisture. When the seedlings are 5cm (2in) high, pot on into 9cm (3in) pots.

Plant in their permanent spot after about 8 weeks; 3 plants to a grow bag, approximately 45cm (18in) apart if growing in open ground or one plant to a 3ltr pot.  Grow in a sunny position. They also appreciate a little well-rotted farmyard manure, not too much as this will result in lush growth and little fruit.

Keep evenly moist, if growing in a pot or grow bag be extra vigilant as they can dry out extremely quickly when the weather is hot.  Once the first fruit has set feed weekly with a high potassium food, such as a tomato feed.  Ensure night-time temperatures don’t drop below 12C (54F) and maximum day-time temperatures don’t exceed 30C (86F) as this will reduce yields. Try and keep the atmosphere humid by either placing the pot on a tray of damp gravel or wetting the greenhouse floor twice a day. Pinch out the main shoots when the plant is 30cm (1ft), this will encourage fruiting side shoots. It may need to be supported with several canes.
If the flowers turn brown and drop off they are most likely not being pollinated. This mainly occurs if they are grown indoors. This is easily remedied by either putting the plants outside to let the bees do the work or, using a paintbrush rub the insides of all the flowers.

Picking fruits when green will encourage heavier cropping, but leaving them to ripen on the plant will result in sweeter peppers and hotter chillies.

Fruits can be left to shrivel and dry on the plant or dried in the oven on a very low setting, 10 – 15 minutes at a temperature of 100C should be sufficient but this will depend on the size of the chilli. If they are not dry after this time check every 2 minutes as they burn very easily. They can also be strung up and left to dry naturally. This method is best for long thin fruits. A good portion of the stem is left then, using a needle and string or fishing wire, thread through the stem at an angle of 45 degrees to produce a long bunch, called a ristra. Hang somewhere light, warm and well ventilated. Keep an eye on them and remove any fruit which become rotten as they will contaminate the rest of the bunch. Once dry they should keep for several years. Hang the ristra in a sunny window or keep in a sealed storage jar. If the fruits become moist they will darken and need to be discarded.
To freeze chillies; remove seeds, chop, place on a tray and freeze. When frozen store in an airtight bag.
Chilli oil is another useful way of preserving chillies and can make a lovely present if preserved in an attractive bottle. Place chillies, amount varies according to how hot you want the oil, into a pan of hot malt vinegar. ( If this is not carried out you run the risk of the chillies becoming contaminated with botulism.) Simmer for 10 minutes then remove and drain on kitchen paper. Add to olive oil and simmer for 5 minutes. When cool put into sterilised glass bottles.

Pickle chillies by cutting a couple of slits in them then wash in salt water. Pack into pickling jars with a teaspoon of peppercorns, 5 bay leaves and 3 tablespoons of salt, finish approximately 1cm below the rim. Heat 1 litre of cider, rice or white wine vinegar with 6 tablespoons sugar until almost boiling, pour over chillies, cool and seal. Leave for 2 weeks before consuming.