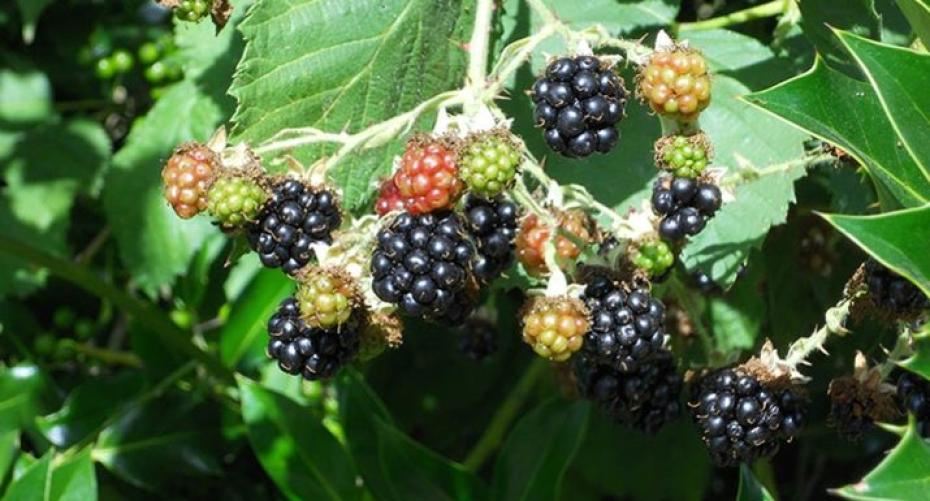 How To Grow Bountiful Blackberries

Blackberries are easy to grow, food for free in autumn and nutritious

The humble blackberry considered to be a weed by so many is one fruit which almost always never fails to give a generous crop. Picking blackberries out of the hedgerows on a sunny, late summers evening is one of life’s little pleasures; with the added bonus of getting food for free. If the thought of being lacerated is off-putting then the thornless varieties are easy to grow at home. The blackberry, or bramble, is perennial and belongs to the rose family. There are over 375 species spread over Europe, north-west Africa, North and South America and the temperate regions of west and central Asia; with Mexico and Oregon, USA being the major commercial producers.
They make very good security hedging and are a valuable nectar source, with the leaves being food for caterpillars and loved by deer and goats. When left to grow wild they soon colonise waste land where they form a dense tangled mass, providing shelter for small mammals and birds. Ancient folklore says that they shouldn’t be picked after Michaelmas Day, 29th September, as the Devil makes them unfit by spitting on them. There is logic to this tale as in the cooler, wetter conditions of autumn the fruit becomes infected with moulds. They are high in fibre, vitamins C and K and also manganese.

They are tolerant of most soils but need a sunny aspect in order for the fruit to ripen. They ideally need a free-draining but moisture retentive soil. If your soil is based on chalk, sand or clay it would be worthwhile enriching it with a barrow-full of organic matter, such as compost or well-rotted farm manure. Plants are usually bought in the autumn in bundles of 5, and really need planting straight away when the ground is still warm and the plants can put on some root growth before the winter. Soak the bundle before planting as this enables the roots to be separated easily and so minimises any damage. They need support from a wall, fence or wires; which need to be 45cm (18”) apart with the bottom wire 23cm (9”) from the ground. Plant about 2.5m (8’) apart, depending upon the cultivar. Cover the root ball with soil. Mulch with chipped bark, about 7cm (3”) thick, to keep the area around the plants weed-free, keeping the mulch 5cm (2”) away from the stems, to prevent any rotting and fungal infections. If planting in a dry spell make sure they are well watered, until they are established. Cut the canes back to a healthy bud to ensure lots of shoots in spring.

In spring top dress around the plants with a general purpose fertiliser at a rate of 100 grams per square metre. The new shoots need tying into the wires. After the canes have had their first winter cut the side shoots back to 5cm (2”) as this will encourage fruiting shoots. Remove the old canes once they have finished fruiting, and tie in the new growth. Remember to keep well watered to ensure plump, juicy fruits.

Keep the soil between the plants weed free to minimise the chances of attacks from pests and diseases. They are usually fairly disease free, but may have to be netted against the birds. Blackberry cane spot can be a problem; it appears as grey spots on the canes which can spread to the leaves. Canes split and eventually die; the only remedy is to cut out the affected canes.

Pick the fruit from the end of July to the end of September. Remember to ask the landowners permission before entering fields. Pick carefully as they crush easily. Avoid any over-ripe fruit or any with mould or unripe segments. Store in the fridge in a single layer for up to 3 days. Freeze in a single layer, then store in plastic bags for up to 3 months.

They can be used for jams, jellies, wine or desserts. Use unsweetened puree as a glaze for duck instead of the usual orange. Made into a coulis it can be used as a topping for ice-cream or in fools and sorbets.
Coulis
Put 250g of blackberries, 50g caster sugar and 10ml water into a pan, bring to the boil and simmer for about 5 minutes until the fruit is tender. Stir in half teaspoon of vanilla extract, remove from the heat and allow to cool. Blend to a puree then strain through a sieve. It will store for 3 days in the fridge or 3 months in the freezer.
Blackberry and Apple Crumble
60g unsalted butter
60g porridge oats
60g plain flour
60g Demerara sugar
Rubbed together until the mixture resembles breadcrumbs.
Place equal amounts of sliced cooking apples and blackberries in an ovenproof dish. Sprinkle with Demerara sugar, amount depends upon how sweet you want it to be.
Cover with the crumble mix.
Bake in a moderate oven for approximately 30 minutes until the fruit is bubbling and the crumble has browned.
Serve with custard, cream or ice-cream.