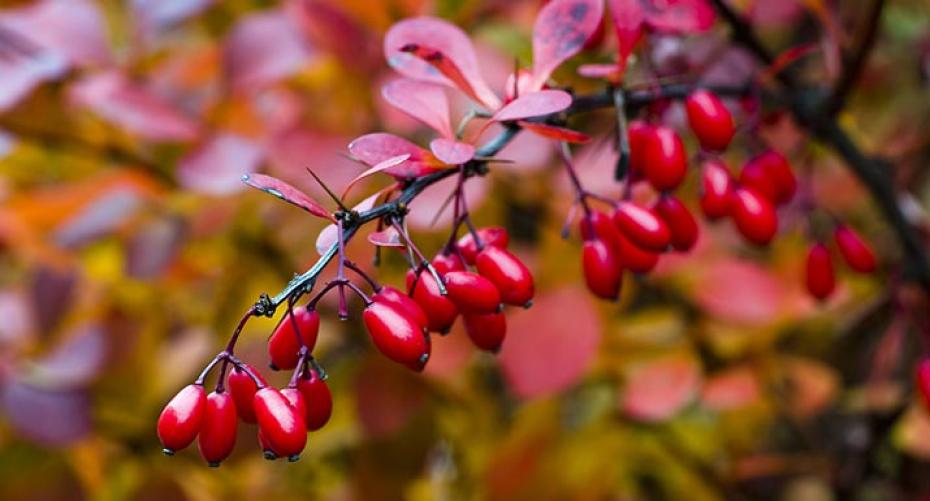 How To Grow Berberis

Perhaps a plant that you may consider is too common to have in your garden, berberis has plenty to offer. Commonly known as the barberry, it is a genus which can be found across the globe from temperate to subtropical regions. It comes in a range of sizes & shapes including evergreen & deciduous species which offer colourful foliage, flowers & fruits. Although berberis are easily available from garden centres & nurseries, they are mainly species and cultivars of B. thunbergii & B. darwinii. More unusual berberis are less easy to find as they are difficult to propagate from cuttings & if propagated by seed, will readily hybridize with other species grown nearby.

As berberis are robust & versatile they can be used in a variety of situations from borders to specimen shrubs & because most are spiny, make good formal or informal hedges. Specimen shrubs of evergreen or semi-evergreen plants such as B. darwinii can be left alone or pruned lightly; hedges can be pruned twice a year or once a year for a less formal look. Prune after flowering in early summer which will unfortunately lead to a loss of berries, alternatively prune some of the fruited branches in winter to neaten hedges. Deciduous berberis such as B. thunbergii can be kept in check by winter pruning of one in five stems down to the base, this also stimulates new growth. Alternatively they can be coppiced each year by pruning down to a few inches above ground level. Hard pruning will probably delay flowering for a year but is a good way of rejuvenating an overgrown shrub.

There are a number of berberis cultivars with an award of garden merit from the RHS. Deciduous Berberis thunbergii f. atropurpurea cultivars ‘Atropurpurea nana’, ‘Rose Glow’, ‘Golden Ring’ & 'Harlequin' all come into this category & have small pale yellow flowers followed by deep red or crimson berries. 'Atropurpurea Nana' is an ideal shrub for a small garden as its compact dwarf nature (to 60cm) makes it easy to place in a mixed border. It has reddish purple leaves that colour up nicely in autumn before falling. 'Harlequin' is also fairly compact (to 1m) & has rounded deep purple leaves which have splashes of cream and pink which lightens the foliage. ‘Rose Glow’ grows to about 1.5m & has foliage that changes colour with age starting off marbled pink & white before gradually turning purple. 'Golden Ring' (above) also grows to about 1.5m but has nicely rounded purple leaves that turn red in autumn but have an eye-catching narrow edge of yellow.

Other berberis of note include B.’Georgei’ which has nicely arching branches to 2.5m which bear pendant racemes of yellow flowers producing abundant deep red berries. Evergreen B. stenophylla (above) which can grow to 3m & has narrow leaves on arching branches which clusters of deep yellow scented flowers followed by berries which are blue-black in colour. Also evergreen is Berberis lologensis 'Apricot Queen' which grows to about 2.5m & is similar to B. stenophylla but its abundant flowers are bright orange in colour.

If you enjoy growing berberis there are other species & cultivars available but you may have to hunt them down. The RHS Plantfinder may help you or ask in store to see if our suppliers can find the shrub you are searching for.