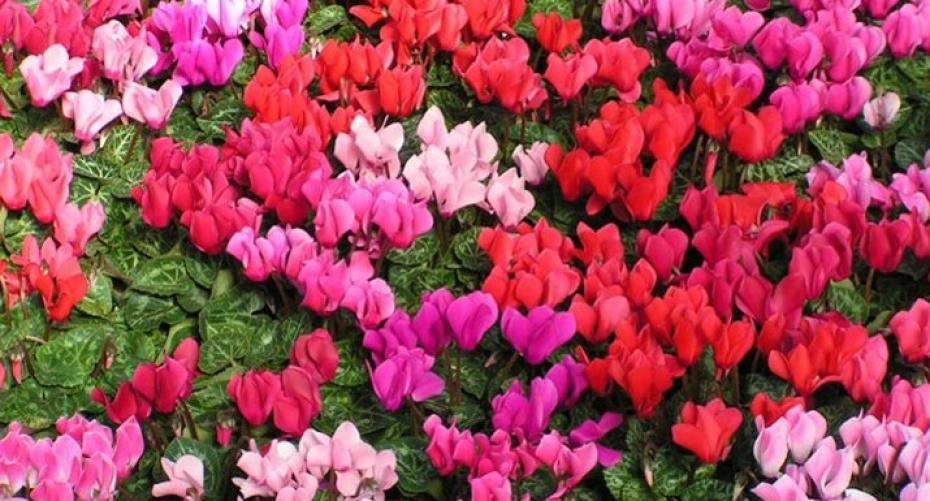 How To Grow Bedding Cyclamen In The Garden And Indoors

Brighten up winter with a patch of colourful cyclamen

Cyclamen persicum, the Persian cyclamen, has been improved to be longer lasting, to have more flowers and a larger range of colours than the original botanical species. Colours range from pure white through pinks to deep magenta, red, striped and picotee edged. They are approximately 20 species, and were originally from the Middle East and the Mediterranean. They were thought to be introduced to France in the late 16th century, where the first hybrids were developed in the 19th century, producing a much stronger, more floriferous plant. In the language of flowers they stand for sincerity. They provide a welcome burst of colour and fragrance in the autumn/winter garden when there is little else. They are very versatile being used indoors, outdoors and as a cut flower.

They can be used in hanging baskets and containers or planted into the ground. They don’t like heavy rain and strong winds so would appreciate a sheltered site in dappled shade with dry soil. They are fairly hardy and can tolerate frost down to about -3 to -4C (24 – 26F). They need an open free draining soil as they rot if left to sit in wet soil, so it would be a good idea to incorporate some grit before planting. If planting in hanging baskets or containers use good quality peat-free compost mixed with Perlite to aid drainage. Also add some slow release fertiliser to the mixture or the planting hole if planting into the ground, as they will need feeding throughout the growing season. They need a good air flow as rain on the leaves needs to dry as soon as possible otherwise they tend to rot. Dead head as soon as the flowers start to fade, take the stem off down to the corm by twisting and pulling at the same time; any stem left attached to the corm will rot and this could lead to the corm rotting too.

They need a cool situation out of direct sunlight. Keep on the dry side, don’t worry if it wilts a little as soon as you water it will perk up again. There are several ways to water them: water around the edge of the pot with a long necked watering can, avoiding the corm in the middle; stand the pot in a saucer of water for 10 minutes then throw away any un-used water or plunge the pot up to the rim in a bucket of water for a few seconds if the plant has started to wilt.

If slow release fertiliser isn’t incorporated into the compost they will need feeding every week with a balanced liquid fertiliser. Feed until the leaves start to go yellow in summer. Don’t feed if the soil is bone dry. Slow release plant sticks are available for indoor plants and ensure that you don’t over-feed.

If the flowers start to lose colour they need more light, so move to a sunnier position and feed; as above.

Yellow leaves over the flowering period, not to be confused with the natural yellowing of the plant dying off, are a sign that it is too warm and wet. Take off the yellow leaves, let it dry out completely and move somewhere cool.

If the flower stems are soft that is a sign that it is too wet and starting to rot, so cease watering until it is dry.

Feed and water until the flowers have finished and the leaves have gone yellow in early summer. Let the corm dry out then re-pot in September leaving the top third of the corm above the soil. Start watering gradually and feed when the leaves have appeared.

Used as a cut flower it should last for up to 2 weeks. Use only pure water with no preservatives and keep cutting the stems back.