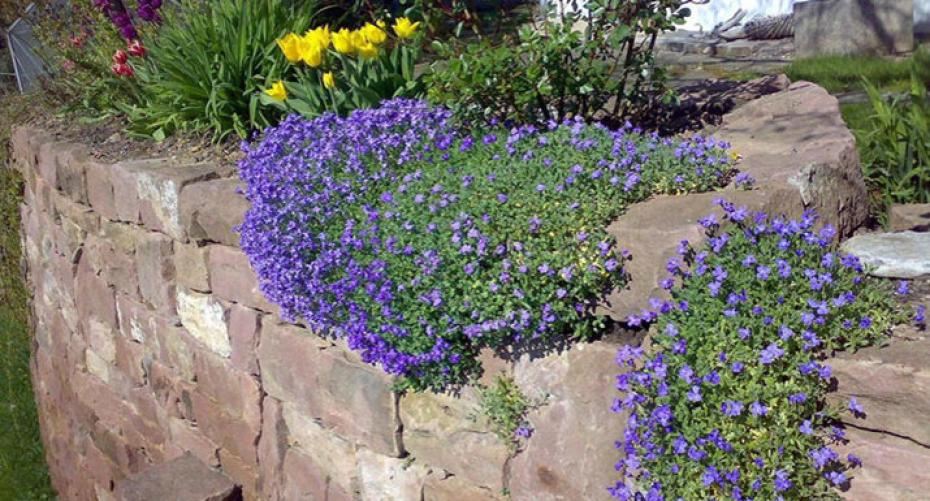 How to grow aubretia

You know spring has arrived when you see walls covered in a purple waterfall of Aubretia. This alpine member of the Brassica family needs full sun and dry conditions so is ideal to plant in the top of a wall where you will see it to its best advantage, cascading down the sides. It looks fantastic grown with bright yellow Alyssum montana ‘Mountain Gold’ and snow white Arabis caucasica ‘Snowcap’. They originally come from Central Asia and Europe where they grow in poor soil on rocky limestone screes and outcrops. Most of the varieties come in lots of shades of purple and lilac but if you search you can get pink and dark red forms.

They need a really well drained spot in full sun, ideally on top of a wall or in a container where they can cascade over the edge, as they can reach a drop or 60 – 90cm (2 – 3’). They prefer an alkaline soil but do seem tolerant of a neutral growing medium. Incorporate some horticultural grit into the compost and a little lime if it is neutral. Don’t enrich the soil with any fertiliser just a little leaf mould.

Water when first planted but once established it should take care of itself. Top dress with a 50/50 mixture of horticultural sand and leaf mould with a small handful of lime added, in spring. Once it has finished flowering shear it over to keep it nice and tight and prevent it going straggly, just don’t go right into the old woody growth. It should then grow new leaves which will keep the nice tight cushion form.

Take cuttings from mid to late summer by pulling off a shoot. They seem to take better if pulled off with a heel rather than being cut. Select a shoot with a nice rosette of leaves at the top and about 5 - 10cm (2 - 4”) of brown stem. Place it in a really gritty cutting compost, add extra grit if necessary, and place it in a cold frame to root.

They are relatively pest and disease free but if they are not sheared over every year they can become a bit bald and woody in the centre. You can try and regenerate the centre by placing some gritty compost over the bald patch, obviously if it is growing down a wall this is not an option. You could try cutting it right back or the best option could be to just pull it out and replace with a new plant. Once it starts to go a bit woody take cuttings a couple of years before needed.

Purple and lilac varieties are to be found in early spring in all garden centres but there are a few a little bit different: