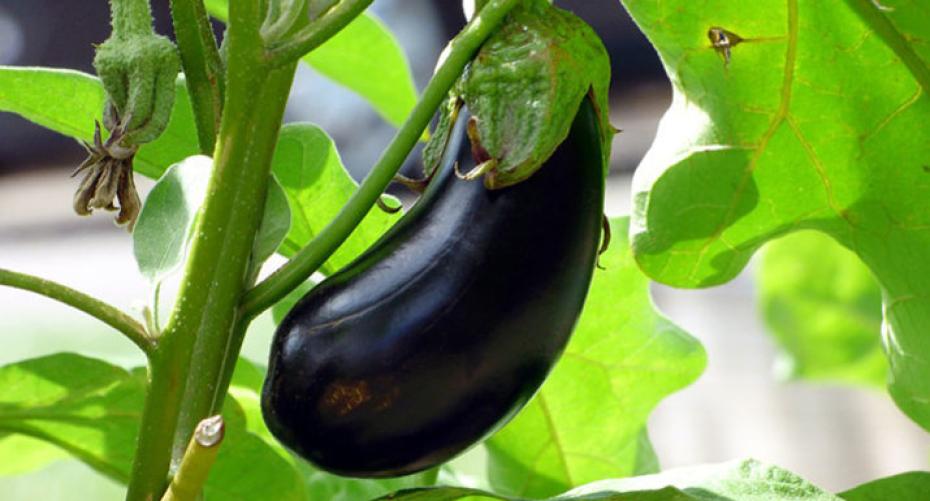 How to grow aubergines (eggplant)

Aubergines have the reputation of being quite tricky to grow as they need a long hot summer; it takes about 6 months from sowing the seed to harvesting the fruit. As they are Mediterranean plants they also need a long stretch of sunshine; however that’s no reason not to give them a go, if you can grow tomatoes then you will be able to grow aubergines. They can be a bit bland but combine with some spices and herbs then grill over charcoal and they are delicious. They are packed full of goodness; phytonutrients protect brain cells and block harmful free radicals, antioxidants help lower cholesterol and they also contain vitamins B and C, folic acid and potassium, so it’s worth trying them out in a few recipes. They don’t keep very long in the fridge so are better cooked in a dish and then frozen, or they can be preserved in jars in olive oil.

As they need such a long growing season the seed must be sowed as early as possible, late February - early March. Sow 5 seeds in a 15cm (6”) pot on the surface of good quality seed compost then cover with a thin layer of vermiculite. Place in a heated propagator at a constant temperature of 20C (68F) and keep the compost just damp. Once they have germinated, about 2 – 3 weeks, and formed 2 pairs of leaves prick them out into individual 7cm (3”) pots into seed compost. Continue keeping them warm and damp and start feeding with liquid seaweed once a week. Once the pot is full of roots repot into a 10cm (4”) pot. Keep repotting into a slightly larger pot until you reach the plants final growing position; either a 30cm (12”) deep pot or into a greenhouse bed. They can be grown in a growbag, maximum 2 per bag but don’t cut the bag along the top, instead stand it on its side and cut holes in one side.

Choose a site which gets as much sun as possible. The advantage of growing them in pots is that you can move them around during the day so that they are in sunlight as long as possible.

When you plant into the final position use good quality peat-free compost with a forkful of well-rotted farmyard manure in the bottom of the container or planting hole. This will help retain moisture. They need high humidity which is easier to achieve when they are grown in the greenhouse. In the north of the UK they are probably better grown in a greenhouse but in the south you could probably get away with a sheltered, south facing position, preferably against a brick wall as they retain heat and release it at night. Space the plants, either in pots or the ground, about 60cm apart.

They need constant heat, at least 15C (59F) at night when young and at their peak growth and a pretty constant daytime temperature of at least 20C (68F). They need to be constantly damp and also a high humidity so damp down the greenhouse floor, mist regularly with a spray and leave water in buckets. Once they have reached a height of 40cm (16”) pinch out the growing tip so that the plant will branch out and produce more fruit. Once you have done this start feeding weekly with a high potash fertiliser, such as Tomorite. At this stage they will also need supporting with canes.

Once they have formed a good amount of fruit, 6 in the case of the large varieties and 10 – 12 on the smaller forms, remove any subsequent flowers and new side shoots so that the plant can put all its energy into growing its existing fruits. As soon as they start to flower make sure that doors and vents are open during the day to allow access for pollinating insects. Planting French marigolds between the plants can also attract pollinators, as well as attracting white fly away from the aubergines. If you want to make sure that they are pollinated just gently shake the plants to allow the pollen to float around the greenhouse.

If planted outdoors and a cool night is forecast just cover them with a couple of layers of horticultural fleece.

The large fruiting plants should give about 4 – 6 fruits whereas the smaller fruiting plants will yield substantially more, around 10 - 12. The general rule is to pick them when they are just yielding to the touch and nice and glossy; if they have started to lose their shine then the seeds are starting to form inside and you may have to scrape out some of the centre.

Aphids generally cluster around the growing tips so can be rubbed off between finger and thumb or just spray with a weak solution of washing-up liquid and tepid water.

Red spider mite are microscopic bugs which flourish in a warm dry greenhouse, and are very difficult to spot, the first signs often being mottled leaves. If you take a fine mister and spray gently between the leaf axils their webs will become visible. Keeping the greenhouse damp and humid will deter them.

White fly are tiny white winged insects which flourish in greenhouses and again cause yellow disfigured leaves. They also exude honey dew, a sweet sticky substance which in turn attracts sooty fungus. Control by planting French marigolds or other plants which attract beneficial insects which will feed on the white fly. Sprays are also available but they will also wipe out the beneficial insects; just make sure you use one which is food-safe. Sticky traps can be used to identify insects but don’t leave them too long as they also trap beneficial insects. Biological control in the form of Calcid Wasps (Encarsia Formosa) is the best form of eradication as they lay their eggs in the whitefly.

Aubergines not only come in the familiar large dark purple form, there are small egg sized fruits and long thin ones which are much more manageable for a small family. They also some in white, green, yellow, pink flecked and purple/white striped.

Just slice, brush with a little cold-pressed rapeseed oil and place directly onto the grate over direct medium – high heat, they taste even better grilled over charcoal or wood pellets. They can also be cubed and threaded onto skewers with peppers, courgettes, mushrooms and halloumi for a great tasty vegetarian dish.

Aubergine, potato and goat’s cheese gratin (adapted from a recipe of Diana Henry)

Fry the aubergine, in batches, in olive oil until soft and golden brown on both sides. Season. Drain on kitchen towel.

Cook onions in olive oil until soft, about 10 minutes, add garlic and cook for another minute.

Bake at 180C/gas 4 for 45 – 60 minutes. If cooking on the BBQ cook over indirect heat at the same temperature.

This dish is a really tasty vegetarian dish or a one-pot accompaniment to meat.