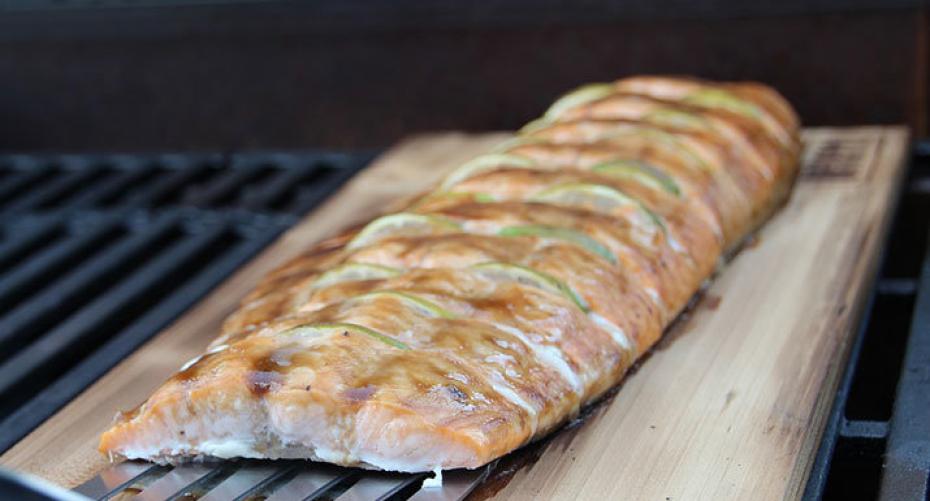 How To Grill On The BBQ Using A Plank

Cook your salmon on a traditional flavoured wooden plank

Cooking food on a plank of wood besides an open fire has been carried out for centuries and was probably started off by Native Americans in the Pacific Northwest who fastened whole salmon to a wooden board and stood it besides an open fire. This method of cooking usually coincided with the annual salmon run up the rivers. Nowadays it has been adapted to suit the barbecue with the food being cooked over an indirect heat source; a lot of other foods are now cooked on the plank, not only salmon.

The first planks were Western Red cedar, but now different flavoured woods are being used, such as maple, pecan, anything in fact that comes as flavoured chips. Click here to read the blog ‘Get that authentic BBQ smokiness with flavoured wood chips, chunks and pellets' to see how the different flavoured woods compare. As with the wood chips you may need to experiment to find a flavour which suits your style of cooking. They are fantastic for quick cooking fish, meat, pizza, vegetables and cheese. If you do want to cook a thicker piece of meat then you will need a thicker board, as a thin board could burn through before the food is cooked.

The size of plank you choose will depend upon the size of your BBQ and what you are going to cook. The flavour you choose will also depend upon what you like to cook; the most common plank being Western Red Cedar. Fish takes on a good flavour from both alder and cherry, chicken and pork are good with apple, maple and pecan, but if you like the more flavoursome beef and game then they can stand the stronger flavours of hickory and oak.

If you don’t buy a dedicated board from a BBQ outlet then you will have to prepare your board by sanding well to avoid any splintering.

The first thing you need to do is soak the plank in water as this slows down the time it takes to burn through the wood; weigh it down to make sure it is completely submerged. If you want to add an extra layer of taste to your food soak it in a flavoured liquid such as beer, wine, fruit juice or herb and garlic infused water. Use lukewarm water as it opens the pores allowing more of the flavour to penetrate into the board. Soak for anything from 1 to 4 hours; if they are not to be used immediately store in a sealed plastic bag in the freezer. Make sure it is thoroughly thawed out before using.

Heat the grill to 175 – 225C (350 – 450F) and set the coals or burners up for indirect cooking. Place the plank over the indirect area and toast for 3 – 4 minutes on both sides, with the lid down, before you start cooking. If you want that intense charred woody flavour then char the plank on one side over direct heat before cooking. Place the food on the charred side; this particularly suits quick cooking items such as fish fillets. If the plank becomes too charred you may not be able to re-use it, it depends upon the thickness of the plank.

There are two schools of thought on whether you need to oil the plank or not and either way seems to have its aficionados. If you do oil it just lightly oil the side the food is going onto and definitely not the underside as it will then just catch fire. Try experimenting with flavoured oils to add another dimension. If you are cooking fish with the skin still on just brush the skin with a little oil to prevent it burning.

Fish can also be cooked on a layer of thinly sliced lemons to prevent it sticking, add another flavour and keep your board clean. You can also sprinkle the board with a thin layer of sea salt. Fresh herbs can also be used to keep the food just off the actual plank; woody Mediterranean herbs, such as thyme and rosemary work best.

Your plank just needs to smoulder and not catch fire so keep an eye on it throughout the cooking process. If it does happen to catch fire or start to blacken too quickly just keep a small plant hand sprayer filled with water nearby to douse any parts of the plank which do catch fire. You can cover the whole plank and food with tin foil to slow down the cooking process and prevent the food burning.

If you have your fuel source at either side of the plank then there is no need to move the food, but if it is to one side then the plank will have to be turned round halfway through the cook. It is easier to cook with a plank on a gas BBQ as the heat source is more consistent and won’t suffer from flare-ups which can ignite the wood. Always cook with the lid closed.

Serve the food from the plank; make sure it is not smouldering underneath by giving it a light spray with water. Place the plank onto a heatproof surface or onto a baking sheet. Make sure you are wearing proper BBQ heat-proof gloves when handling the board. The Unity BBQ tables from Norfolk Leisure with their heat-proof tops are ideal for standing next to your BBQ. They can be used as a prep area, can store all your serving dishes, glasses, napkins and anything else you will need, saving you endless trips into the house. Also recommended is the Memphis Grillzebo, which comes with 6 stools and 2 bars to accommodate your guests, drinks and food. The metal canopy covers your BBQ and provides some protection from the elements. There is also a rail which includes a spice rack and space to hang your BBQ tools.

Most planks can be used several times, it depends upon the thickness of the plank and how much it has charred. Place the plank into water as soon as it has been used as this will help loosen any food residue. Just wash the plank in plain warm water and using a steel scouring pad clean off any food residue; don’t use soap as this will penetrate into the wood and taint your food. If the plank is heavily charred it may be necessary to sand it down. Make sure you leave it somewhere warm with a good air flow to dry out, if its left in a damp atmosphere mould can grow on the wood. The more the plank is used the less flavour it will impart to your food so eventually it will end up as firewood.