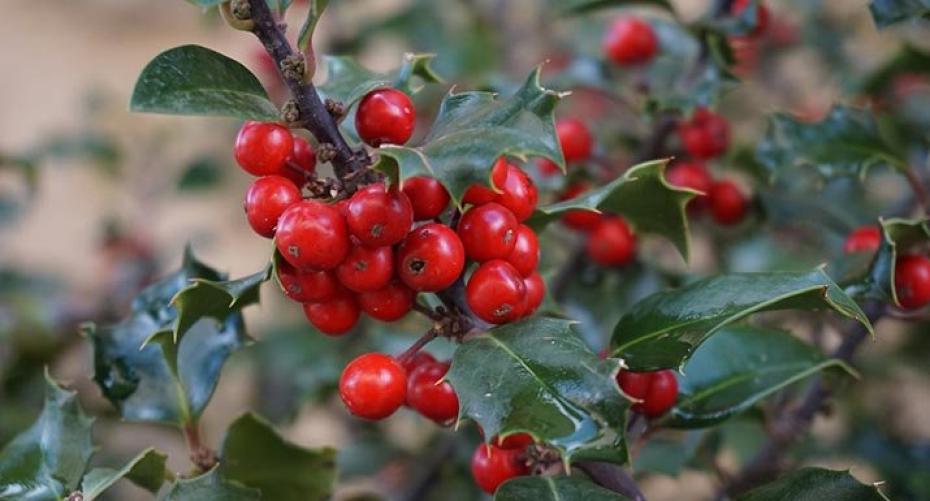 How To Deck The Halls With Holly At Christmas

Follow our hints and tips for growing holly for Christmas

What could be more Chrismassy than boughs of holly; this versatile Christmas decoration is so easy to grow, even if you don’t have a garden. Placed along a mantelpiece all you need to add are some chunky candles and a few baubles. Weave branches around the stair rods and add a string of lights, just don’t use the prickly variety if you have children. Placed down the centre of the dinner table interspersed with some dried fruits and nuts and some colour co-ordinated dinner candles and you have a simple, quick, stunning centre-piece. Even if you are not artistic this rustic look can easily be achieved. Holly is the classic base for your Christmas wreath, just wire it into a circle of twigs and add some nice rosy crab apples and berries for a simple rustic look. A sprig of holly with berries is the traditional decoration for the Christmas pudding.

In pagan times they represented eternal life and even centuries later the scarlet berries were thought to deter witches. A holly tree planted outside the house was thought to guard against the ‘Evil Eye’, bring good luck and protect from lightening, fire and storms. It was also thought to cure whooping cough if the patient was given milk to drink from a bowl made of holly wood. It is still considered unlucky to bring it into the house before Christmas Eve and to remove it before Twelfth Night. Placing the prickly leaves into a seed drill on top of seeds helps deter mice from digging them up; particularly large seeds such as peas and beans. It also provides a refuge for nesting birds from predators.

Holly is very hardy so is suitable for all areas of the UK and is also tolerant of salt-laden winds so makes a great plant for seaside gardens, making an excellent wind-break. It likes nice fertile well drained soil in a sunny or semi-shaded position, although it is quite tolerant of most soils except really wet water-logged soils. It would be ideal on the edge of a woodland planting scheme. The prickly varieties make an excellent security hedge. Even if you don't have a garden try planting a standard holly either side of the front door to create a focal point; they can be dressed at Christmas with ribbons and weather-proof baubles. Don’t plant in an herbaceous border as weeding is a nightmare owing to the dropped leaves continually pricking your fingers!

They really don’t like being moved so make sure that you think carefully about the planting position. Bare root plants need to be planted over the winter period when they are dormant; from late autumn to early spring, but container plants can be planted at any time of the year provided the ground is not frozen or waterlogged. Dig a hole large enough to accommodate the root ball and enrich with some good quality peat-free compost or well-rotted farmyard manure. Tease out the roots if they are running round and round the pot, to allow them to grow straight out into the new compost. Add a handful of balanced fertiliser such as Growmore. Plant to the same depth as it is in the pot and back-fill with the soil, firming it in with your foot to remove any air pockets. Give it a good water and make sure it is kept well watered for the first year after planting until it has established a good root system. If planting in a pot choose one which is a few inches larger than the pot it is already in. Place a piece of crock over the drainage hole to prevent it becoming clogged with silt. Use peat-free John Innes No 3 compost.

They are very slow growing so if there is not much change for a couple of years after planting, but it still looks healthy, don’t despair you aren’t doing anything wrong. A native Ilex aquifolium if left to grow unchecked will eventually reach a height of around 12m (39’) over a period of about 50 years. Feed with a balanced fertiliser in spring. Keep well watered. Mulch in spring with chipped bark to keep down weeds, which compete with the holly for water and nutrients. They don’t usually require much pruning just remove any dead or diseased branches in early spring, or cut off any wayward shoots to maintain a nice round shape on standards. Cutting off straggly shoots will result in a more compact shrub with more berries. If you have a variegated variety you must cut off any all green shoots as soon as they appear otherwise the plant will eventually revert back to being all green.

You can sow the seeds but they do take several years to germinate and if your plant is a named variety the resulting plant can revert back to look like one of the parents, and bear no resemblance to the original plant. The easiest way to propagate is by taking hard-wood cuttings. Use new growth that has started to harden in early autumn. Cut a piece about 15cm (6”) cleanly, just below a leaf node. Take off all the leaves apart from about 4 at the top of the cutting; dip the bottom in a rooting compound and place several around the sides of a 10cm (4”) pot filled with John Innes potting compost and place somewhere cool until they have rooted.

Hollies are relatively trouble free; the major problem being a lack of berries. There are 2 main causes of this; number one being that your plant is a male, only the females have berries. Number two is that there is not a male plant nearby to pollinate your plant; this can be rectified by buying a male companion. If you live in an urban environment there is a good chance that there will be a male nearby. You cannot tell which plants are male and which are female unless there are berries or flowers on the plant. The male plant has longer stamens in the flower than the female and the female will have the berries. Some varieties such as ‘J C van Tol’ are self-fertile and don’t need another plant in order to produce berries.

Sooty fungus can sometimes be a problem but this forms on the honeydew which is excreted by sap sucking insects such as aphids or scale insects. Remove the fungus with a soap and water spray or a fungicide and then use a systemic insecticide to control the insects. If you only have a slight infestation of fungus you can apply both at the same time but if the leaves are covered in black mould you may have to cut out the worst affected branches and wash off the mould before the insecticide can penetrate through the leaf surface.

Worldwide there are over 400 varieties with some, such as Ilex crenata, bearing no resemblance to the traditional holly we have at Christmas. The native holly is Ilex aquifolium and is usually used at Christmas. Some of the named varieties of holly can also be misleading with ‘Silver Queen’ being male and ‘Martin’ being female.

For more information, hints and tips on gardening, decorating for Christmas, barbecuing and much more check out our youtube channel.