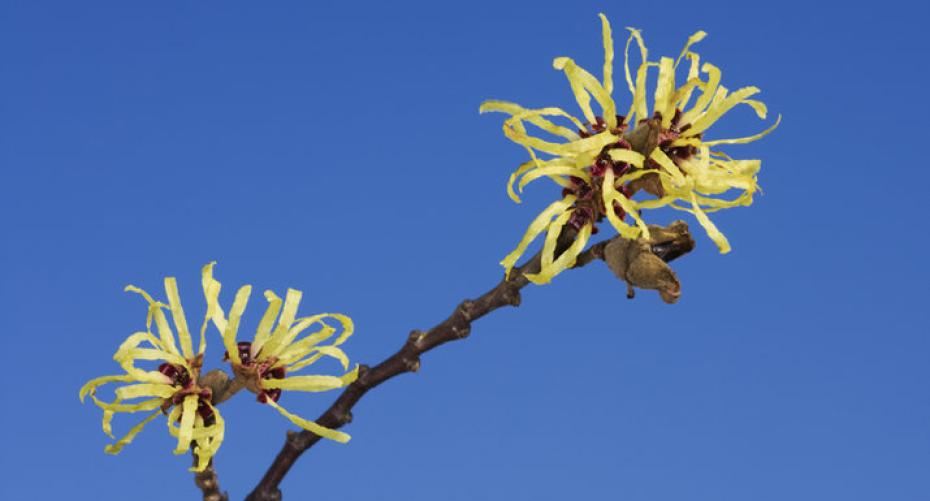 How To Create Interest In The Winter Garden

At this time of year, plants that were unassuming partners to the summer display suddenly leap to the fore. Variegated evergreens such as Elaeagnus seem much brighter and the hollies provide a contrast with their rich red berries which promise a good source for Christmas displays indoors and out. Many conifers are also at their best at this time of year such as Pinus mugo ‘Ophir' whose long needles become suffused with gold. There are a number of Cornus (Dogwood) and Salix (Willow) varieties too, whose coloured stems brighten the garden at this time of year and which can be kept down to size by pruning.

As most of the leaves have dropped off deciduous trees and shrubs and you have had the time to do some clearing up, it is time to take stock of your ‘winter garden'. Although you will not be spending as much time outdoors over the coming months, it is just as important to be able to look out of your window and see some colour and interest. If you are going to create a winter garden you need a small space that is overlooked from a window and is near to the house. If you don't have the space, or even a garden, then a small group of pots near the door would make all the difference.

Whether you are planting a bed or creating a display in pots you should not be without a fragrant winter flowering shrub. On a cool, still day, their fragrance can be detected some way away from the plant, inviting closer inspection whilst lifting the heart.

Witch Hazel - Hamamelis spp.
The Witch hazels are a family of quite slow growing trees or shrubs, making them ideal for small gardens or containers. They ideally need an acid to neutral soil so if your soil is alkaline then plump for a container. In autumn they give a good display as their foliage turns spectacular shades of gold. In winter their bare twigs erupt with sweetly fragrant clusters of spidery flowers in shades of yellow through to deep red. H. x intermedia ‘Sunburst' has pale yellow flowers whilst H. mollis ‘Goldcrest' has large yellow flowers with dark golden bases and H. intermedia ‘Diane' has deep mahogany red blooms.

Daphnes are delightfully fragrant shrubs which grow well in borders or in woodland settings and once planted do not like to be moved. They will also perform well in a container which means you can place them near the path or door to your house. There are a large number of species and varieties so look out for some favourites like the winter-flowering Daphne Mezereum which is popular at Hayes. It has purplish-pink or white flowers along the length of its stems which can grow to 1.2m (4ft). If you prefer something that flowers a little later, try Daphne bholua ‘Jacqueline Postill' with its pretty star-shaped blooms which are pink on the outside and white within. D. bholua prefers a sheltered position in a lime-free soil which does not dry out in summer.

Wintersweet - Chimonanthus praecox (fragrans)
Appropriately named because of its sweet winter fragrance it has pendant yellow flowers with paper-thin petals and reddish brown centres which appear on leafless branches during the winter months. A mature shrub can reach a height and spread of 3m (10ft) and can be grown in the border or trained up a wall. C. praecox var. luteus has pure yellow blooms.

Christmas Box - Sarcococca confusa
This is an understated yet deliciously spicy perfumed shrub with dark green leathery leaves. It will tolerate less than perfect growing conditions yet produce healthy stems which erupt with fragrant white sprays along their length. A slightly shaded position will promote healthier growth and make the flowers stand out more in the winter light. We stock S. confusa, S. humilis and a variety which is new to us this year, S. hookeriana var digyna 'purple stem'. The new shoots are flushed with an attractive dark purple-pink hue which gradually fades as the stems mature. The stems are clothed with slender, tapering, dark green leaves and the winter flowers are sweetly scented and pink-tinged; they are followed by rounded blue-black fruit.

Honeysuckle - Lonicera spp.
Maybe not quite as blowsy as the summer flowering varieties, the winter flowering honeysuckles are just as fragrant. Lonicera standishii has small flared creamy white flowers on bare stems from late autumn into winter and looks similar to L. x Purpusii ‘Winter Beauty' which flowers from winter well into early spring. L. fragrantissima has pairs of two-lipped white blooms which burst out from the leaf bases throughout the winter. These fragrant beauties would make a great display grown up a wall to maximise flower production and to ensure their delicious perfume is within reach of your front door. A single twig, picked and brought indoors, will scent a room for days!

The Viburnums make quite a large shrub and come in evergreen and deciduous varieties some of which are happy to fill the air with their heady perfume into the spring months. We stock all those mentioned below.

Mahonia
The Mahonias are spiky shrubs with deeply divided leaves and spectacular racemes of yellow fragrant flowers. They prefer some shelter from cold desiccating winds and can grow to 2.5m (8ft) on most soils, but will survive a severe pruning once flowering has finished. Amongst others at Hayes, we stock Mahonia bealei and Mahonia x media which has a number of good cultivars such as ‘Charity' & ‘Winter Sun'.

I could not finish off without mentioning Jasmine nudiflorum. Although its flowers do not have the scent of its summer flowering cousins it is a reliable winter favourite.

The winter flowering jasmine has bright yellow flowers which clothe its spreading branches throughout the winter. It can be used to cover an east-facing wall, where it will shrug off the early morning thaw and cope with searing April winds, or cheer up a north facing wall in the depths of winter. It needs tying-in and training but its sunny flowers brighten up long winter days.

If you need further inspiration we have many displays in the nursery at the moment which are geared towards making your garden or patio look brighter for the winter. There is a great selection of conifers of all shapes, sizes and colours and our new stock of hollies and standard hollies have recently come in. If you are looking for something on the smaller side we also have a number of plants with winter interest, such as berries or variegated leaves, which would look good in containers whilst you wait for the bulbs to push their way through.

Don't forget, if we haven't got something in stock that you want, we will do our best to order it in for you!