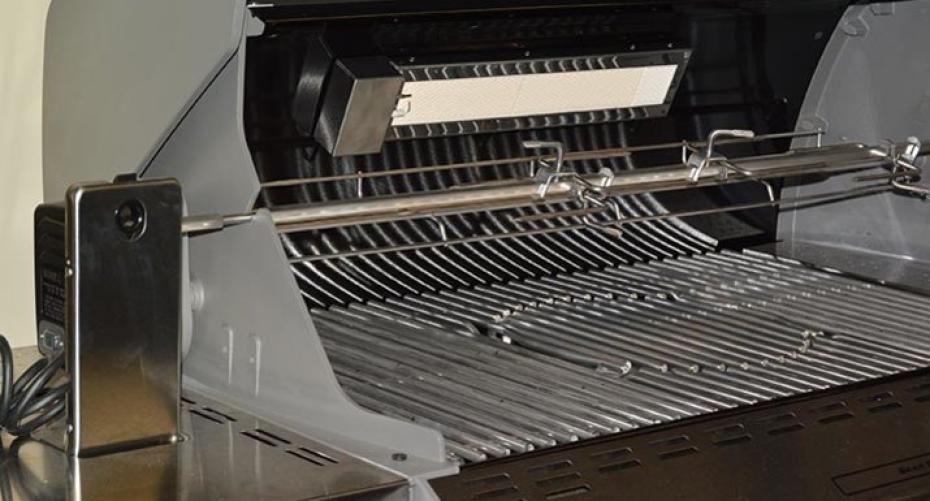 Use a rotisserie attachment for tender, succulent, flavoursome meat

This video was shot in the nursery of Hayes Garden World during one of Gourmet BBQ chef, Richard Holden’s, frequent weekend demonstrations. It was one of 5 dishes he was cooking on 4 barbecues all at the same time. The local lamb was sourced from Stuart Smith butchers of Milnthorpe. The leg of lamb was boned and rolled by the butcher so just needs the flavourings applied to the outside. Richard has used chopped rosemary and mint, grated garlic, grated lemon rind, some salt and pepper, all bound together with a little Dijon mustard and rapeseed oil. Massage the mixture into the lamb.

The lamb is being cooked on the rotisserie attachment on the BBQ as the all-round heat enables the lamb to be cooked quicker and keeps the juices within the meat rather than them flowing out; this results in a more succulent joint of meat. Rotisseries are available both for gas and charcoal barbecues, with some of the larger barbecues including them as standard. Invest in a Weber Instant Read Digital Thermometer and there will be no more guessing when the meat is cooked; once it reaches 60C it will be just cooked pink, if you want it a bit better done leave it until the temperature reaches 75C. As soon as the meat reaches temperature take it off as cooking it further will just start to dry out the fibres. Place it on a warmed plate, covered with foil to rest for about 30 minutes, this makes it easier to carve and enables the juices to set. You don’t need a rotisserie to roast on the BBQ but it does make for more succulent meat.