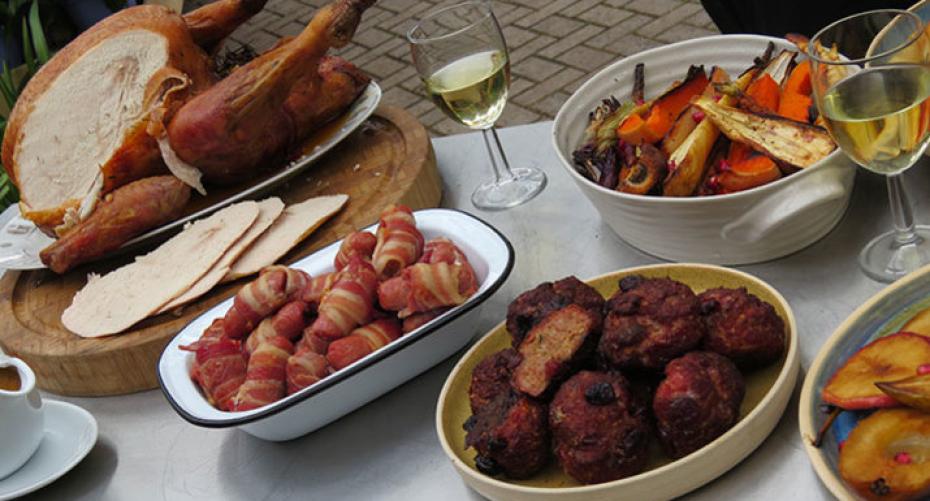 A BBQ is not just for summer; cook a juicy tasty Christmas turkey outside

You don’t need a high end BBQ to cook the Christmas turkey outside. Richard Holden and Ian Hodgett, from The Barbecue Shop here in store, show how easily you can cook a juicy, tasty turkey on a normal Weber 57cm Master-Touch charcoal barbecue. This does require a little more attention than cooking on gas as you will have to add more briquettes at hourly intervals. The BBQ draws in damp air from the surrounding atmosphere resulting in a tender, moist bird; so why not use your BBQ to relieve the pressure on the oven, as it can often be a mammoth juggling act to get everything cooked at the right time.

Drip pan (for the gravy)

Roughly chop the vegetables and place in a large Weber drip pan with the giblets.

Mix all the ingredients together.

Season the turkey cavity with a generous amount of the salt and pepper. Cover the outside of the bird with the rashers of bacon and place the stuffing mix into the cavity. Position the BBQ so that you can see the integrated thermometer from the house then you don’t have to keep going outside to check.

Place the lighted briquettes into the two char baskets, one at either side of the BBQ leaving you with an indirect cooking zone in the centre.  Bring the BBQ up to a temperature of 175 – 200C (347 – 392F) before you start to cook. Make sure the turkey has been at room temperature for at least 30 minutes, this allows it to cook evenly and also takes less time, which means using less fuel. Place the drip pan containing the vegetables on the bottom grate between the char baskets. Replace the top grate and place the turkey in the BBQ over the tray of vegetables. The vegetables will catch the juices and form the base of the gravy. Fold 2 pieces of tinfoil and place one at each side of the turkey just underneath the wings then fold up half of the foil to shield the wings and stop them burning.

Using the iGrill to monitor the temperature place the 2 probes into the thickest part of the bird and set the temperature on your smartphone to 75C (167F). The iGrill will send a text when the temperature of the turkey is 5C below the limit. Check the fuel levels every hour and add 3 briquettes to each side and that should maintain a constant temperature. Take the bacon off about halfway through the cook so that the skin will crisp, there is no need to add butter or any other oil to the skin as the fat from the bacon should have rendered down.

Once the turkey reaches 75C take it off immediately otherwise it will start to dry out; place it to rest for at least 45 minutes in a warm spot covered with 2 – 3 layers of tinfoil and a couple of tea-towels. If you don’t have the iGrill check that the turkey has reached the correct temperature with a digital temperature probe.

For more Christmas recipes head to our Youtube channel.