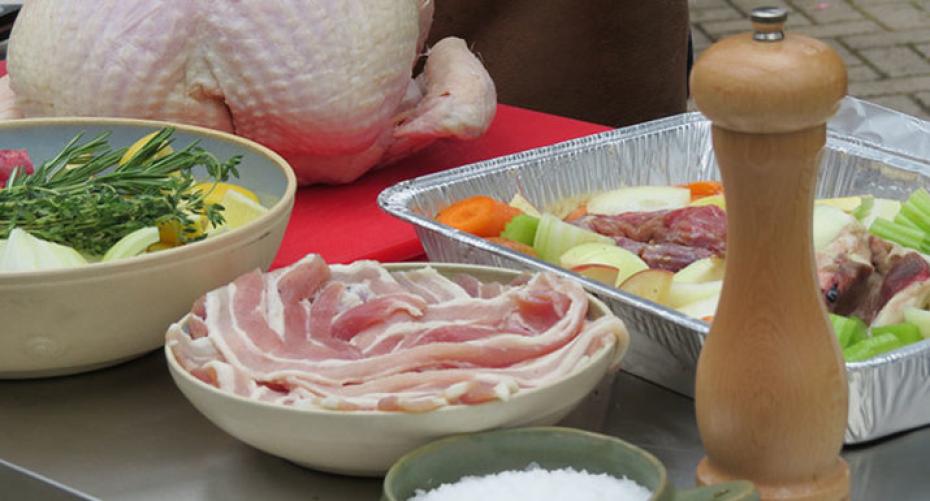 Solve the problem of having too much food to cook and not enough oven space at Christmas, by cooking Christmas dinner outside on the barbecue. If the BBQ is set up with plenty of fuel and the iGrill inserted into the turkey then you can be warm and snug inside enjoying the festivities while the turkey quietly cooks outside. Just position the BBQ so you can read the integrated thermometer from indoors. Richard Holden, top UK BBQ chef, and Ian Hodgett, from The Barbecue Shop here in store demonstrate how straightforward this can be using the Weber Genesis II LX gas barbecue.

Season the cavity well with the pepper and salt. Cover the outside of the bird with the streaky bacon.

Drip tray (for the gravy)

Roughly chop the vegetables and place in a large Weber foil tray with the giblets.

Mix together all the ingredients and fill the turkey cavity.

Make sure the turkey has been at room temperature for at least 30 minutes before cooking as this allows it to cook more evenly and take less time, therefore using less fuel. Heat the grill to 185C (365F), the 2 side burners being on and the central one completely off. Place the tray of vegetables and giblets in the centre underneath the grate and over the unlit burner. This will catch the juices dripping from the turkey. Fold two pieces of tinfoil to sit underneath the turkey and fold up to protect the wings (see the video). Place the turkey in the centre of the grill over the tray of vegetables.

We have used the iGrill to monitor the temperature. Insert the 2 probes into the thickest part of the bird and set the temperature on your smartphone. The iGrill will send an alert to your phone when it is 5C off the desired temperature; which should be set at 75C (167F) for poultry. Cooking the turkey outside makes for a much more succulent bird as the BBQ draws in the moist air.

Remove the streaky bacon about halfway through the cook to allow the skin to go nice and crispy. The skin shouldn’t need brushing with butter or any additional fat as this should have rendered out of the bacon. Once the turkey has reached the required temperature remove from the grill and leave to rest in a warm environment covered in 2 – 3 sheets of tinfoil and a couple of tea-towels. Don’t be tempted to leave the turkey on the grill ‘just to make sure’ as cooking it after the required temperature has been reached will only result in a dry tasteless bird. Once you have used a digital thermometer to allow you to accurately cook poultry you will become addicted to it as the difference in taste and succulence is amazing, especially if, like me, you always cook poultry to death to make sure it is safe.