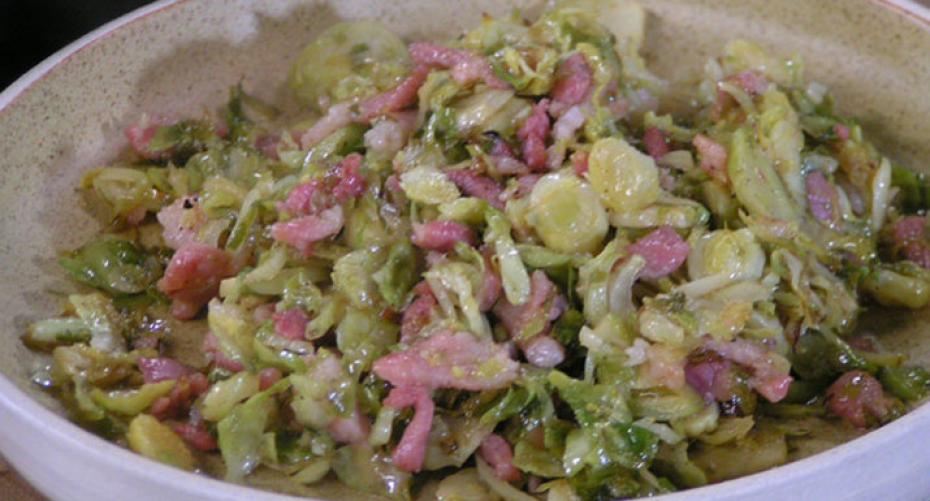 This recipe is so delicious it will win over any Brussels sprout haters. Gone are the days of hard, bitter sprouts that you have to boil to death. Old varieties of sprouts had to have a frost on them to turn the cellulose to sugars to make them more palatable, but modern varieties have been bred to be sweeter without needing to be frosted. Cooking them quickly in the bacon fat gives them a lot more flavour and drizzling them with a little maple syrup at the end just adds a little more sweetness. If you want to add another layer of flavour just use some of the flavoured Traeger pellets.

Cooking them on the Traeger or any charcoal or gas BBQ in a skillet is really easy, only takes about 5 minutes and is a simple task for any non-barbecuer relieving the burden on the Christmas chef.

Slice the Brussels sprouts into thin threads and chop the bacon into small pieces.

Pre-heat the Traeger skillet on the grill, to around 200C then add the bacon. Cook for a couple of minutes until crispy and the fat has rendered out. Remove the bacon and add the sprout threads. Close the lid and allow to cook for a couple of minutes, give them a stir and cook for another 2 – 3 minutes. Once they have softened but still retain their nice green colour add the bacon, season and drizzle with a little maple syrup. If the bacon does not render much fat you can add a little butter.