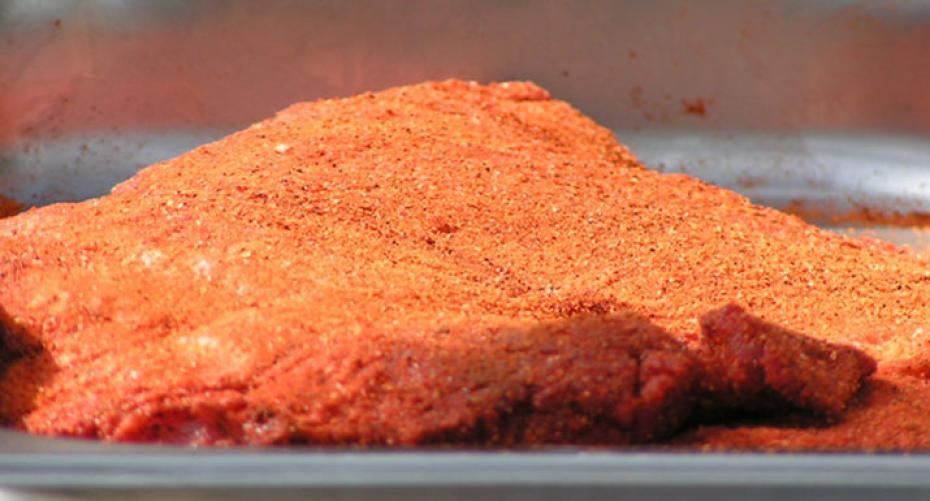 How To Cook Beginners Brisket On The Traeger Pro 22 Grill

Brisket is one of those iconic American barbecue staple dishes. It is one of the cheaper cuts of beef and as a working muscle needs to be cooked ‘low and slow’, over a low heat for a long period of time. You need the beef to reach a temperature of 95C (203F) as this is the temperature at which the connective tissue will have broken down, leaving you with tender, tasty meat. We have cooked a whole flat brisket, about 3.2kg (7lb), which has two separate types of meat; the ‘flat’ which is what you would slice and is all meat, and the ‘point’ which is what you turn into ‘burnt ends’. This is the flap of meat which you cut off after about 4 hours, cube it and then cook in the juices which have dripped from the whole joint and collected in the drip tray. You can add more rub to the ends or just leave them as they are to cook to 95C. Here in the UK we are more accustomed to having our brisket boned and rolled but your butcher will just bone it and leave it as a flat piece of meat if asked. This video is the first of three we have made to show how to cook the brisket on three different pieces of kit; the Traeger, the Weber Smokey Mountain and the Weber 57cm MasterTouch. In this video top UK barbecue chef Richard Holden and Ian Hodgett from The Barbecue Shop here at Hayes Garden World take you through all the stages of cooking the perfect brisket.

Take the meat out of the fridge at least half an hour before you start to cook and cover in your favourite rub, leaving it for half an hour enables the rub to penetrate into the meat. The rub we have used is The General by Angus and Oink who formulate and manufacture their products in Aberdeen, using all natural ingredients. Pre-heat the grill to 120 – 135C (248 – 275F) and put the prepared meat straight onto the rails. Insert the probe into the thickest piece of the meat, close the lid and leave for about 4 hours. The new Traeger Timberline grills 1300 and 850 will send alerts to your smartphone when the core has reached the desired temperature.

Once the temperature has reached 72 – 75C (161 – 167F), after about 3.5 – 4 hours, take out the meat and wrap in tinfoil. By this time a good crust will have formed and the meat will no longer be able to absorb any more smoke flavour. We have placed the meat onto a large Weber Foil Tray and added about 1cm (¼”) of beer then covered it with tinfoil; this added liquid keeps the meat nice and moist during the last cooking period. At this stage you can also rub a sauce into the meat; you would also cut off the point, cube it and place it into the bottom of the tray or into another tray to cook until nice and sticky. Some barbecuers’ just wrap the meat in foil but the disadvantage of this is that if the foil tears or when it’s opened up all the juices run everywhere, whereas if it’s placed over a tray all the juices are contained.

Place back onto the grill and re-insert the probe. If the temperature of the grill has dropped don’t be tempted to raise it, it will come back up again. Cook until the temperature has reached 95C; the connective tissue actually dissolves at 94C (201F) but by reaching 95C then you are sure it will have melted. Leave to rest for ½ - 1 hour before carving.

We regularly hold BBQ demonstrations here in store so take a look at the Events page for the date of the next demo.

How to look after houseplants in winter
Hints and tips for keeping your houseplants happy Most of us know that our garden plants need some…
Sleep with your Christmas tree
How having a Christmas tree in the bedroom can lead to a better night's sleep After what’s been a…
December
Well, November is seeing itself out with windy weather & blustery showers spreading across the…