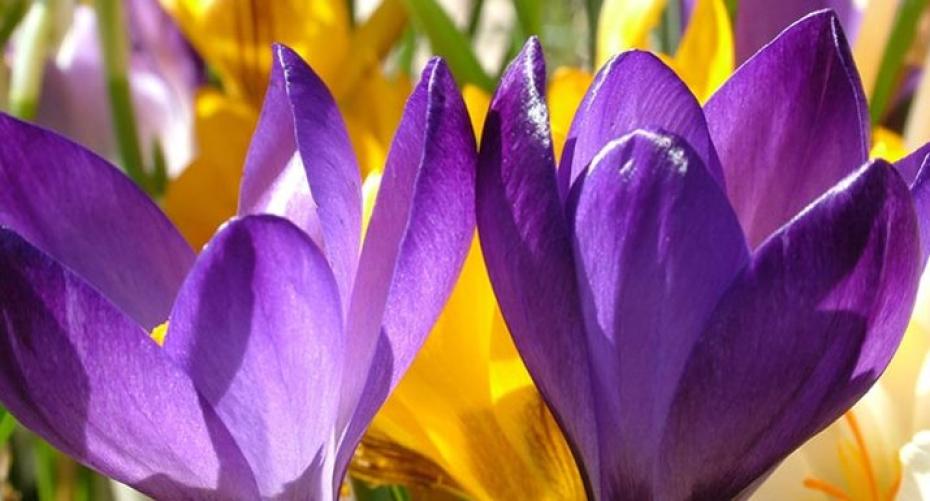 What could be more uplifting after a long weary winter then the sight of little brightly coloured jewels popping through the soil in a rockery? Even if you don’t have a rockery you can still find space for these little gems. An old sink, collection of pots (even broken ones) or a pair of old boots will all hold a few early flowering alpines. Just make sure you have good drainage holes in the bottom then put in a layer (5cm; 2”) of crocks or gravel then a 50/50 mixture of John Innes No 1 and horticultural grit. If they are planted in this nice free draining mixture then the majority of these plants are hardy, with the exception of some of the daphnes. It is sitting in wet compost over winter which will kill the plants not the cold temperatures.

All these small plants which are suitable for a rockery or an alpine trough need full sun and really well draining soil, so when you are planting dig in a 50/50 mixture of John Innes No 1 and horticultural grit. They don’t want a rich soil otherwise they will put on a lot of lush growth which could be at the expense of flowers. Most rockery plants also want to be small and compact as large, lush plants look at odds with their surroundings.

The perennial shrubs and alpines are drought tolerant once they are established and have got their roots into the cool rock crevices, but they will need watering for the first season after planting. Leave the foliage on the bulbs after they have flowered until it has died back as it needs to photosynthesise and build up the bulb and flower for next year. You can give the bulbs a weak feed of a high potash fertiliser, such as Tomorite, after they have flowered, to further encourage them to flower the following year. Most of the bulbs need planting to a depth of 3 – 4 times their own height.

To maintain their nice compact cushion shape, some of the ‘rockery’ plants, such as the aubretia and alyssum need cutting back after they have flowered. If they are left they can become quite straggly and woody and produce fewer flowers.

This evergreen perennial looks fantastic on top of a wall where the tiny flowers form a huge patch of yellow, but would also suit a larger rock garden. It reaches a height of 20cm (8”) with a spread of 45cm (18”). Sow the seed in March to July to flower the following April to June or plant from March to September.

This perennial bulb produces small pink, blue or white stars about 15cm (6”) in height from March to April. It needs a handful of multi-purpose compost incorporated into the gritty mixture as it needs a little more moisture than most of the other rockery plants. Feed it after flowering with a high potash fertiliser, such as tomato food as this will encourage the formation of flowers for next year.

This is the quintessential rockery plant which produces a huge mass of small purple or pink flowers from March to April; you see it tumbling over walls almost everywhere. It needs poor alkaline soil so give it a handful of lime every spring. Cut it hard back after it has flowered to maintain a nice compact cushion shape. This looks particularly fabulous planted in a wall top.

Chionodoxa (Glory of the Snow)

This perennial bulb will eventually produce a large patch of starry blue flowers from March to April. They also look fantastic randomly planted in lawns to naturalise. Remember not to cut the lawn until the foliage has died back.

These are one of the first heralds of spring, popping up in shades of purple, yellow and orange and pure snow white. Not only are they at home in the rockery but can be planted in lawns, under deciduous trees and shrubs, at the front of the herbaceous border and in amongst the spring bedding in a container. Unfortunately the mice love them so you may have to protect the bulbs, before they flower, with chicken wire. If you plant them in the lawn make sure you don’t cut the grass until the foliage has died back.

This small slow growing daphne has tiny pink flowers and only reaches a height of 10cm (4”) and a spread of 25cm (10”). It is however not completely hardy so plant it in a sunny, sheltered position. It needs an alkaline soil with plenty of organic matter dug in when you plant it, but make sure it is also well drained as it won’t tolerate being either dry or wet. Consider carefully where you are going to plant it as once planted they don’t like being moved.

This is an unusual variety of fritillary which is not usually available in garden centres so it may need some seeking out. The bells are green with a burgundy/chocolate stripe. It grows to a height of 15cm (6”), so is also suitable for adding height to an alpine trough. If you plant them to naturalise in a lawn make sure you don’t mow the grass until the leaves have died down.

These lovely little iris, up to 15cm (6”) in height, will brighten up any rockery. They prefer an alkaline to neutral soil so add a little lime in spring. They come in shades of yellow, purple and blue from the palest to the deepest; and also pure white. They are also suitable for the front of the herbaceous border and incorporated with bedding plants in a spring container. ‘Harmony’ flowers in February and is gorgeous grown in a container and brought indoors; the cooler it is in the house the longer they will last.

These need the same growing conditions as the reticulata and recommended varieties are: ‘George’ which is red/purple with yellow and white markings and 12.5cm (5”)in height. ‘Katherine Hodgkin’  has greeny/blue flowers in early February to March and is 10cm (4”) in height.

These little plants can also be grown in partial shade so you can also plant them under deciduous trees and shrubs. They also look fantastic incorporated with spring bedding plants in a container. They can be brought into the house for a delightful shot of colour; the cooler they are the longer they will last. The mice love them so the bulbs may have to be protected with chicken wire, before they flower.

There are lots of small daffodils suitable for a rockery; the most easily obtained are ‘Tete-a-tete’ and‘Jetfire’. Of the unusual varieties ‘Baby Boomer’ is one of the best; flowering in mid-April, daffodil yellow with 5 – 8 tiny jonquil flowers per head and highly fragrant. ‘Candlepower’ is an unusual pale yellow turning white with age. These tiny narcissi are ideal for incorporating with spring bedding plants in a container. They also look fantastic naturalised in lawns, under deciduous trees and shrubs and at the front of the herbaceous border. ‘Tete-a-tete’ can be forced into flower and brought into the house for Christmas; the cooler it is the longer they will last. If you want to become a serious collector and wish to grow something out of the ordinary you can pay as much as £3.50 per bulb for the more unusual species.

This small blue dainty bell-shaped flower will tolerate a little shade so can also be planted under deciduous trees and shrubs. They look fantastic naturalised in a lawn, just remember not to mow the grass until the foliage has died down. It needs to be planted a little deeper than other bulbs at about 10cm (4”). They grow to a height of 20cm (8”) so are useful for adding a little height to an alpine trough.

There’s nothing like the sight of tulips to create the feeling that spring is really here; they appear in a huge range of sizes and colours. ‘Red Riding Hood’ is worth growing for a good strong scarlet red and ‘Pinocchio’ is a lovely red and cream stripe; both of these grow to a height of about 25 – 30cm (10 – 12”).  Tulipa batalinii  is a  very small species tulip only growing to a height of 10 – 15cm (4 – 6”); there are lots of small subspecies and  some can be as expensive as £2 per bulb, so you can spend as much or as little as you wish.  Incorporate with spring bedding plants in a container and you can have that touch of spring even if you don’t have a garden. They will grow again each year but they are better replaced every year as they tend to weaken and produce smaller flowers in successive years.

Get in touch with our Outdoor Plant team here in store if you would like any advice or guidance on any aspect of your garden.