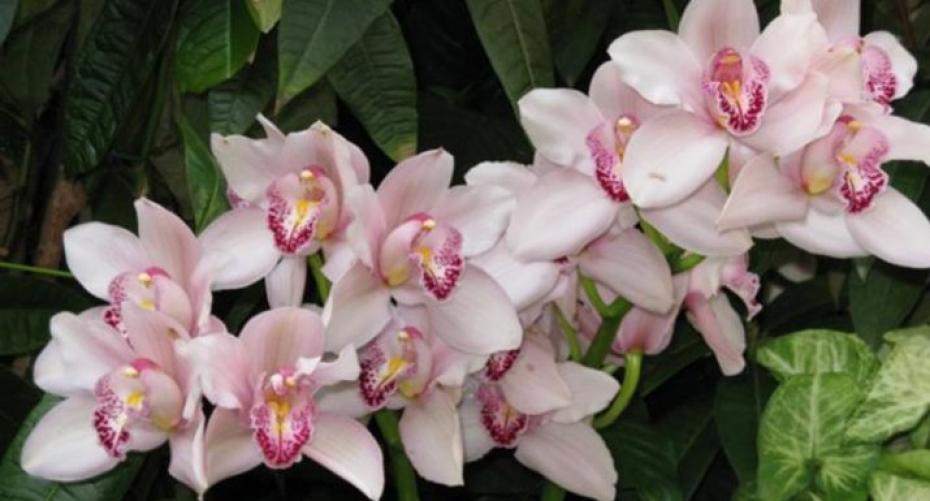 How To Care For A Cymbidium

Everything you need to know to keep Cymbidiums growing and flowering.

This orchid originates from the highland regions of India and Burma so can cope with cooler temperatures. It is a tall orchid, up to 60cm (2’) and comes in a huge range of colours.

It needs good but indirect light and can only be put in a south facing window during the winter. It can be put outside in summer make sure it is shaded from the mid-day sun.

Avoid temperatures below 7C (45F) in winter and ensure a 5C (41F) difference in day and night temperatures. Avoid going over 24C (75F) in summer. When in bud, the night temperatures need to be below 16C (61F). Keep away from draughts and direct sources of heat, such as open fires or radiators. Keep outside during the frost free months.

Water sparingly during the winter; approximately every 7 – 10 days, and more liberally in summer.  Always allow the water to drain after watering; leaving the compost permanently sodden will result in the roots going rotten, and the eventual death of the plant.

Only feed every other watering. Wash through with clean water in-between feeding in order to avoid a build-up of salts which can damage the roots and eventually lead to the death of the plant. After flowering, during early summer, feed with an orchid growth feed, which is high in nitrogen and will boost new bulb growth. From mid-summer feed with an orchid bloom feed until the first flowers appear.

This should only be done after the orchid has finished flowering, approximately every 3 – 4 years when the pot is crammed full of roots. Use a pot one size up from the old pot as too much root room can affect flowering. Always use good quality orchid compost.

Unfortunately in order for the orchid to flower the following winter a specific regime must be followed. An orchid growth feed must be given in spring and early summer after flowering. From mid-summer to when the first flowers open an orchid bloom feed must be given, this will initiate bud formation. Place the orchid outside in a sheltered spot from June to early October. This difference in day/night temperatures should initiate bud formation in July/August. Bring the orchid back indoors to a temperature below 15C (59F) at night.

Let’s Take a Look at Summer 2021
What we're going to be doing in our gardens this year It’s been a long time since we’ve been able…
Looking good
STORE NOW OPEN 7 DAYS; MONDAY - SATURDAY 09:00 - 5:30, SUNDAY 10:00 - 5:00 The Internet Department…
Janice’s fundraising trek
Hayes retiree tackles challenging trek Janice has now finished her epic trek and, so far, has…