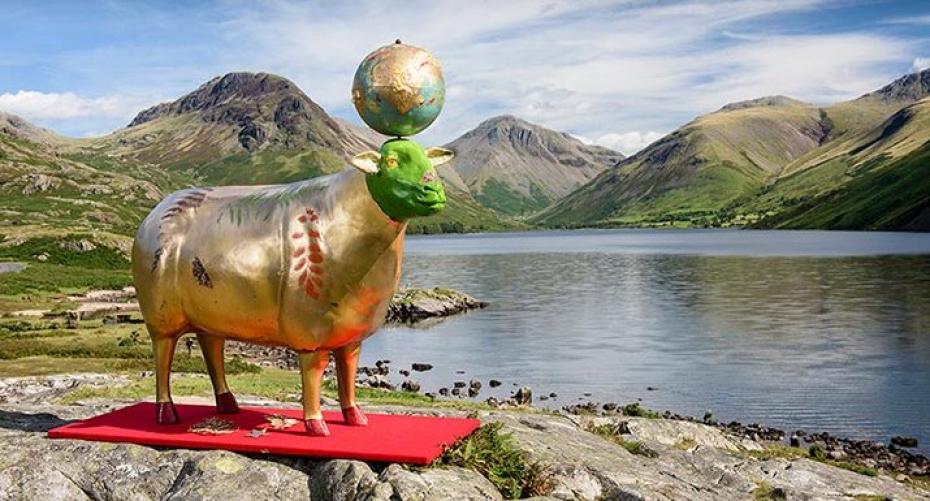 Image courtesy of the Calvert Trust

Hayes Garden World are delighted to have sponsored three Herdwick sheep in this year’s ‘Go Herdwick’ sheep trail. The ‘Go Herdwick’ art trail is the brainchild of the Calvert Trust; there is a large flock of them meandering along the 555 bus route starting at Windermere and passing through Ambleside, Rydal and Grasmere and finally ending up in Keswick. They will be sold off at a Grand Gala Auction in late September to early October. They were released from their winter quarters just before Easter with 'The Hayes 3' now in residence in the garden centre.

The Calvert Trust is a charity which provides outdoor activities for people with physical disabilities enabling them to enjoy all the Lake District has to offer, from a simple walk up the fells to absailing down a cliff face; activities which we so often take for granted but are normally out of bounds for anyone with a disability. The Trust has 40 years’ experience of providing outdoor activities for people with physical disabilities and welcomes over 3,000 people a year; relying on charitable donations of over £1m a year to run the various centres and activities.

Image courtsey of the Calvert Trust

The Herdwick art trail is raising funds for a £1.3 million development of Old Windebrowe, Keswick. This Grade 2 listed farmhouse and tithe barn was once the home of William Wordsworth and thought to date back to the 1550’s. There will be six specially adapted apartments available for anyone who has suffered a brain injury, stroke or has any other physical impairment, to come and have a break and enjoy the beauty of the Lakes. There will also be a communal area with rehabilitation support and occupational therapy.

The Herdwick sheep is ‘the‘ icon of the Lake District having shaped the landscape we love. They are thought to have come over in the 10th and 11th centuries with the Norse settlers; their name is from the old Norse ‘herdvyek’, meaning sheep pasture. Their grazing has shaped the fells resulting in a landscape devoid of trees. The iconic Lake District dry stone walls have been built to confine the livestock; however many of them are now in a state of disrepair as farmers can no longer afford to carry out repairs. Keeping a commercial flock of Herdwicks is no longer viable without EU subsidies as the fleece is virtually worthless; costing more to shear than it is worth. The wool is quite coarse and is now mainly used for carpets and insulation, so they are now mainly bred for meat, lamb and mutton; which is stronger tasting than the usual lowland lamb. They also mature later than the lowland breeds; which mature at around three to five months compared to the ten months of the Herdwicks.

The breed themselves graze up to a height of 900m (3,000’) and are usually out all the year round, being able to survive under snow for several  days; so are ideal for our challenging terrain. An estimated 99% of Herdwicks are farmed in the central and western Lake District leaving them vulnerable to being decimated by disease. Beatrix Potter was a champion of the breed and contributed to arresting their decline; decreeing in her will that they had to be kept on the 14 farms she bequeathed to The National Trust.

The Herdwicks for the art trail are life-size sheep made from glass-reinforced plastic. They are sponsored by local businesses, schools and organisations and decorated by local artists or schoolchildren. The three Hayes sheep have been decorated by Jayne Lancaster, Frankie Cranfield and Alex Jacob-Whitworth. Jayne is from South Cumbria and specialises in agricultural and rural wildlife. She sketches from life and works in pen and ink, pastel, charcoal and watercolour. Her sheep, Rosie, is decorated in a garden design featuring the flora, fauna and aquatic life of the Lake District, complete with bugs.

Rosie at home outside our office

Frankie lives in Caldbeck and paints Lake District scenes, hens, birds, dogs and also house portraits; working mainly in watercolour. Her sheep, Ms Todd, is decorated with an outline of the fells from Blencathra to Ullock Pike and also the fox, which features in so many Lake District tales and folk songs.

Alex is an artist creating her art in a range of mediums including oil, watercolour, acrylics and found objects. She produces works of horses, landscapes, domestic objects and is now starting down the path of abstraction. Her sheep, Lady Ewegenie Baathsheebaa, is based on Steampunk with flowers and tendrils of ivy.

We hope you will find time to seek out the sheep here in the Lake District and visit us at Hayes Garden World to view our sheep and support this very worthy charity.