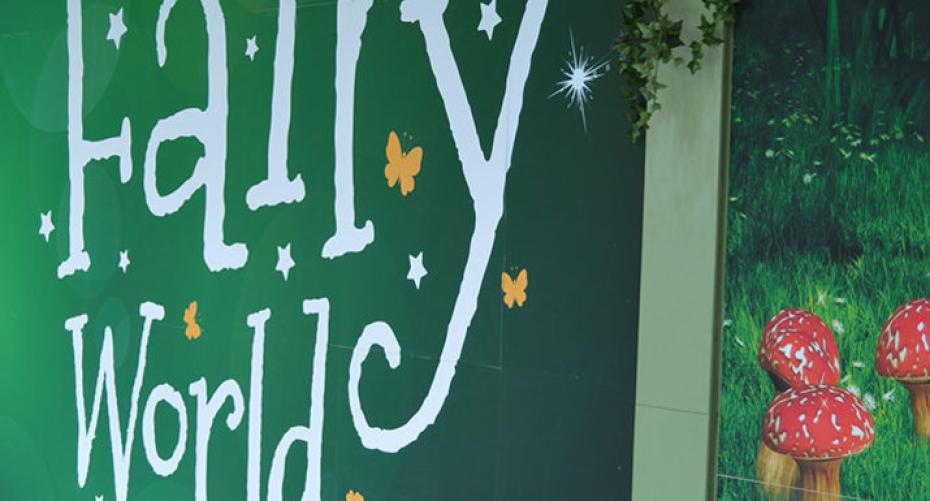 Fairies have come to live in the Magical Wood; see if you can spot them

Come to Fairy World at Hayes Garden World and see if you can catch a glimpse of the fairies who have moved into the garden centre. Scamp came by accident one day; his curiosity very nearly put him in danger. He was on a mission for Queen Kate and he saw an open lorry; so being a nosy fairy he went inside and became trapped when the doors closed. He crouched, frightened, in a back corner behind the boxes until the lorry stopped and the doors opened.

Tracey, our warehouse manager, was unloading the lorry and caught a glimpse of Scamp hiding at the back. She turned her back so that he could escape without being seen; if he had been seen by a human he would have lost some of his magic. He managed to fly out of the lorry without being seen and made his way back to Fairy Valley where he enjoyed telling everyone about his great adventure.

A few days later Queen Kate told Scamp that his friends Flutter, Drizzle, Moe, Neville and Blossom, had all moved to their very own woodland home and that Scamp was going to join them. The owners of the new wood had especially asked for Scamp as Tracey had told them about how brave he was. When he got to his new home he found that Hayes Garden World had made him and his friends a magical wood with lots of new homes to choose from and plenty of little people to watch as they ran around in his wood and had their picnic on his lawn.

There is even a vegetable patch so they can grow their own favourite food; as everyone knows fairies eat lots of vegetables so that they are fit enough to fly. There’s nothing worse than a fat fairy who can’t get off the ground, so every fairy makes sure that they eat lots of tasty fruit and vegetables. The only problem with the vegetable garden is the big fat bunny which steals their food when they’re not looking.

A lot of other animals have also moved into the wood for the fairies to play with, enormous butterflies, otters, frogs, squirrels, foxes, rabbits, deer, owls, ladybirds, robins, mice, enormous snails, lambs, piglets and a badger. There is also a border collie sheepdog just to keep them all in order. See if you can spot the magical unicorn who didn’t want to be left behind and snook in amongst all the other animals.

Don’t forget to enter our competition to give our latest fairy a name; just enter your choice of name on our facebook page. Click here to visit the competition webpage.

Sleep with your Christmas tree
How having a Christmas tree in the bedroom can lead to a better night's sleep After what’s been a…
December
Well, November is seeing itself out with windy weather & blustery showers spreading across the…
How to decorate a small space at Christmas
No space doesn't mean no decorations We all imagine a lavishly decorated home at Christmas with a…