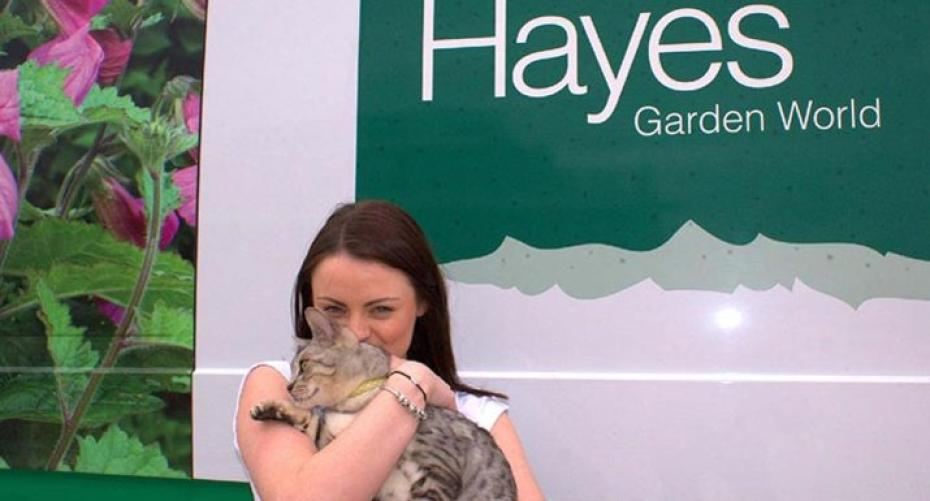 It started out like any other day for Gareth, our delivery driver, load the van with garden furniture, battle the motorway traffic, negotiate London, various drops in the south east of the UK. Then, opening the van doors at another address, he noticed his passenger at the front of the van.

This adventurous feline had jumped on board at one of his previous drops; but where? This was the quandary facing our driver, how could he return the cat to its home? He checked in to base for advice and after lengthy discussions it was decided that the only course of action was to bring the cat home to the Lake District.

Pictures of the cat and a list of possible pick-up locations were posted on facebook with a message for all our friends to share and try and reunite the cat, now nicknamed Long John Silver, with his owner. The post was on facebook at 5pm on friday evening, before the driver arrived home at 8pm.

Meanwhile a temporary cat-loving family was needed to look after the venturesome moggy. In stepped one of our directors, Dallas, who with his animal-mad daughter and wife were only too happy to have an extra guest for the weekend.

Simba making himself at home with Dallas and family

Arrangements were made to email all our customers who had taken delivery of furniture that day to see if they knew of any cats which had gone missing in their area.

Meanwhile facebook was doing its magic with over 3,000 shares and 130,000 people viewing Long John Silver’s picture. In response to advice off lots of facebook friends the cat was taken to the vet at 8am on saturday morning to see if he had been micro-chipped. On the way to the vets Dallas received a message with the owners details; our facebook friends had done an amazing job of finding the cats owner in 12 hours. His delighted owner was notified; his name was Simba.

Arrangements were made for our drivers to make a special delivery back to the south east of England this morning to reunite the wayward feline with his owner.

Dallas with present for Simba from his family for the pleasure of Simba's company over the weekend and an apology for the unintentional cat-napping.

A massive big thank you to all our facebook friends.