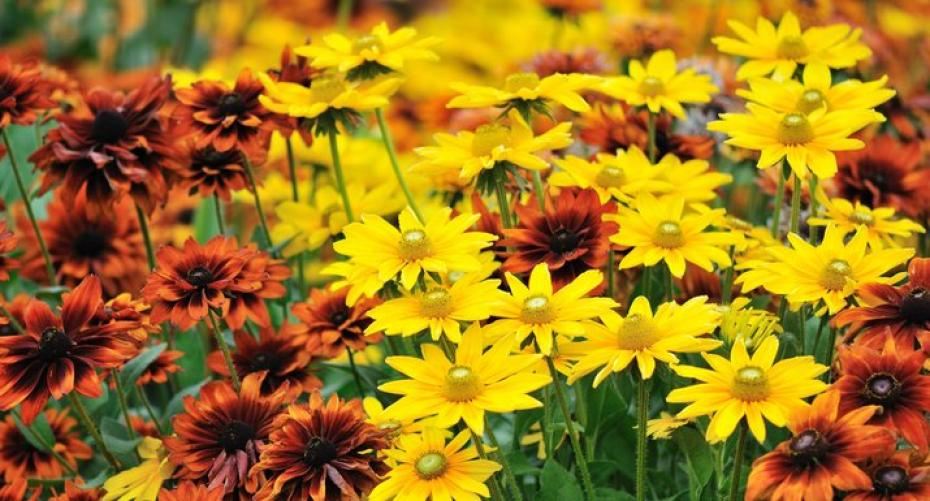 Mixed planting of grasses & perennials came to the fore in the 1990’s when prairie planting was made popular by garden & landscape designers. Perhaps one of the best known advocates is Piet Oudolf who has now designed & planted gardens in Europe & America. You don’t really need vast areas of space to create your own prairie style garden, just take the essence of the idea & mould it to your garden. Prairie gardens require full sun, but a carefully chosen mixed planting which includes grasses can be tailored to match your individual growing conditions, whether they are in full sun or partial shade with dry infertile soils, wet problem areas, sandy soils or clay.

The majority of the hard work in creating a prairie type garden is in the preparation & weeding until the plants are established. Any weeds will effectively swamp both perennials & grasses so the area needs to be cleared before planting & weeded or sprayed regularly whilst the plants get their root system established. This gives you time to plan what you are going to plant & design a planting scheme. A prairie garden is essentially a naturalistic planting of grasses & perennials which sweep along the border effortlessly merging & flowing from one species to the next. To achieve this look it is best to work with clumps of taller perennials & grasses repeated through the border with elongated drifts of shorter plants between. Use gentle curves rather than straight lines, blending the plants together with taller plants placed to create drama. Do some research into the plants that will work best in your space, taking into consideration your soil conditions & their eventual size. Aim for continuous colour, whether it is through the use of grasses, foliage plants or flowering perennials & consider using plants that will attract butterflies & beneficial insects. There needs to be as much emphasis put on the colour & shape of the garden in flower as there is on structure & interest of the garden as it progresses into winter.

Ornamental grasses combine well with autumn flowering plants, for example, asters, helianthus or chrysanthemums make good partners, but foliage plants can also be effective alongside more subtle grasses. For example a side-by-side blend of the foliage of Miscanthus sinensis ‘Variegatus’ and Elaeagnus ‘Quicksilver’ can be a delightful and understated combination.

Rudbeckia and Echinacea (above) are two prairie flowers that love it as the weather gets hotter and look just right shimmering in the sun. Add into the mix the calming balance of some flowering grasses and you have a ready-made planting combination that will cope with the driest of summers. They are quite similar plants, both with a North American, prairie heritage, but the hairy leaves of Echinacea are a handy clue for distinguishing one from the other. Both are superb border perennials, combine well with ornamental grasses and are attractive to butterflies. They will add glorious colour through the summer months and love full sun but will be equally at home in light shade.

Rudbeckia fulgida ‘Goldsturm’ (popularly known as Black eyed susan) is one of the most outstanding varieties available. It has charismatic yellow, daisy-like flowers that are 9-12cm across on stems of up to 60cm. However, it is short enough not to need staking, does not form big clumps too quickly and has a very long flowering period, substantially increased if flowers are ‘deadheaded’ as they fade.

Echinacea purpurea is an absolute winner, flowering from August through to October (depending on location). Colour options include purple-red, in the case of ‘Bright star’ through the deep purple of ‘Magnus’ to the pure white of ‘White Lustre’ and ‘White Swan’. Echinacea purpurea reaches 1.5m in height and a spread of 50cm. They are fully hardy and thrive on well-drained chalk, loam or sand.

For blue flowers try Caryopteris, Perovskia or Michaelmas daisies (above). The bright blue of Caryopteris × clandonensis 'Heavenly Blue' would make a stunning companion in a cool planting scheme or go for the violet blue tubular flowers of Perovskia ‘Blue Spire’ or the violet purple rays of Aster novae-angliae 'Violetta' contrasted with bright yellows & golds.

One plant that is a must for the front of a mixed planting scheme is Sedum spectabile. Its fleshy, glaucous green leaves grow in whorls to produce large flat terminal clusters of starry deep pink flowers in early autumn which deepen with age to a rusty red. Or try the slightly smaller Sedum ‘Ruby Glow’ which has reddish purple foliage & smaller clusters of deep red flowers.

Summer flowering grasses (the ‘flowers’ are the highly decorative seedheads) are adaptable and can grow successfully even in poorer soils. They are extremely versatile, coming in a variety of sizes & colours and perfect for centrepiece positions. As they move in the breeze they bring sound and motion to the garden giving it a peaceful, open space feel. Ornamental grasses are a soft and sympathetic element in the garden and offer the ideal counterpoint to strong, hot perennial colours. They have architectural qualities and a hint of the exotic, providing a spectacle in the garden that far outweighs their demands for care, or their initial investment.

Look out for members of the Pennisetum family (above). Pennisetum alopecuroides ‘Hameln’ is compact, with bottle-brush flowerheads and dark green leaves that turn golden-yellow in autumn. The leaves of Pennisetum villosum can reach up to 60cm in length and take on a purple hue when fully grown, its soft, feathery heads are produced in late summer and early autumn. Pennisetum orientale is a mound forming grass with dark green leaves and bears beautiful flowerheads up to 14cm long.

Imperata cylindrica ‘Rubra’, also known as the ‘Red Baron’, is another spectacular grass. It’s a clump-forming plant and the leaves are shorter, at about 40cm, but they turn red from the tips of the stems downwards, almost as far as the base.

Miscanthus sinensis ‘Silberfeder’ (silver feather) can develop stems as long as 2.5m that remain as an attractive garden feature through winter. The leaves of Miscanthus sinensis ‘Zebrinus’ are shorter (reaching about 1.2m), but the creamy horizontal banding they exhibit can make them appear stippled in sunshine on cloudy days.

Once established, these grasses and perennials are delightfully low maintenance; they will perform year after year with the minimum of intervention and have low water requirements, making them perfect for drought-prone areas. In autumn a bit of light tidying up is best so that the show is allowed to continue into winter with structural seed heads standing out in winter frosts. Spring is the time for a major clear up, cutting stems down to the base to encourage strong re-growth, lifting & dividing plants that are outgrowing their allotted space & feeding with a general purpose fertiliser. This means that ‘hot summer colour’ doesn’t have to be hard work, leaving plenty of time for the serious business of outdoor enjoyment.